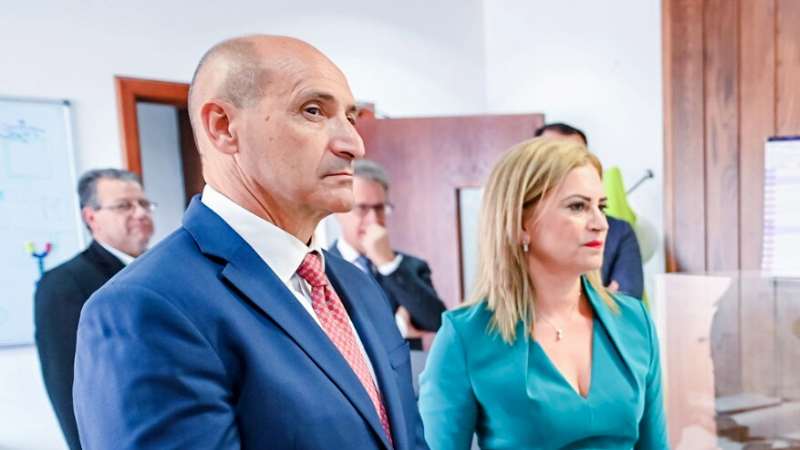 Although the PM ordered the FMS CEO's €13,000 a month contract to be revised downward, it hasn’t, The Shift has discovered through freedom of information requests

Deputy Prime Minister Chris Fearne has defied Prime Minster Robert Abela’s specific orders to reduce a €13,000 a month contract he had given his chief political advisor Carmen Ciantar to act as Foundation for Medical Services CEO.

But a copy of Ciantar’s new contract now obtained by The Shift following a freedom of information battle that despite Abela’s declarations that the FMS chief will have her contract revised downward in the wake of The Shift’s story, this has not happened.

Fearne has instead kept Ciantar’s salary completely intact, according to the new contract signed on 31 May just after the March 2022 general election. Abela had ordered the contract revised after The Shift revealed in January 2022 how Fearne had placed Ciantar, one of his main personal campaign managers, on a €163,000 a year public contract.

Although the NAO had not mentioned Ciantar by name, The Shift’s investigations showed the “high-ranking official” cited in the NAO audit was a direct reference to Ciantar.

Fearne at the time insisted that her appointment was made in the same way as her predecessors, despite being pressed on her role in his political campaign and the fact that she is earning double the salary of her predecessor, Brian St John, who had a financial package of €80,000.

A political storm ensued following The Shift’s news of Ciantar’s extraordinary agreement, and Prime Minister Robert Abela shirked responsibility for the controversial contract and the fact that she was still working at Fearne’s office while also heading the FMS, which is not permitted.

Abela declared the contract ‘predated his time’ as prime minister and he pledged it would be revised downward once it elapses.

“I did not go into detail, but I saw what the NAO said, and I have the Deputy Prime Minister’s word that the contract will be reviewed once it expires,” Abela told the media at the time.

The new contract made available only after the enforcement order

A copy of that contract was only obtained  following a freedom of information battle waged by The Shift and after Ciantar was issued an enforcement notice by the Information and Data Protection Commissioner ordering her to make her new contract available.

The enforcement order was deemed necessary after the FMS failed to make her contract available to The Shift.

Despite several reminders, Ciantar consistently resisted the order but finally relented and in the end made the new contract available as directed.

That new two-year contract, which runs until 2024, has kept Ciantar’s remuneration package completely intact at a total of €163,321 a year. Perks include private family health insurance, a full-time driver and the reimbursement of all communication expenses.

Through a unique clause, the new contract signed last 31 May specifies that Ciantar herself, not the minister, will decide her performance bonus. The bonus is worth a further €26,000 on top of her €130,000 annual salary. Fearne did not reply to questions on the new contract. Instead, he tried to give the impression that it was not a new contract but, rather, an extension of the original agreement.

“The contract of Ms Ciantar is a continuation of the original employment agreement, which still expires in 2024,” Fearne told The Shift.

At the end of a legislature, all contracts such as Ciantar’s are automatically rescinded, and as such, Ciantar’s new post-election contract at the start of a new legislature cannot be an extension.

Clause 16.1 of the contract states that “this agreement supersedes any previous written or oral agreement between the parties in relation to matters dealt with herein”. The word ‘extension’ of the previous contract is not included in any part of the 13-page contract, despite the Health Minister’s claims.

“The assertion that ‘Ms Ciantar has also been given the faculty to decide her own performance’ is incorrect,” Fearne insisted with The Shift.

The contract, however, says otherwise.

According to clause 2.4, the contract specifies that “performance appraisals of the Employee (Ciantar) shall be conducted by the CEO of the Foundation (Ciantar). Additionally, the employee shall attend and participate in quarterly review meetings with the CEO of the FMS (Ciantar)”.

Fearne’s campaign for leadership of the Labour Party, challenging Robert Abela, was led by Carmen Ciantar.

Although Abela retained Fearne in Cabinet after the contest, it is an open secret in political circles that Fearne could be in for a kick upstairs once a European Commission vacancy becomes available in 2024.

Ciantar’s contract with the FMS draws to an end in July 2024, when Abela is expected to inform Brussels of his national nomination to the European Commission.

While citizens beg for charity,
When suffering a rare disease,
His friends are waddling in money,
While the wait for a MRI is not funny.

In the wee hours of the morning,
For a scan our elderly have to wait,
Getting a lump checked takes five months,
While the lumps in his friends pockets accumulate.

Chris forgot to stock on antibiotics,
For children who are in need,
But cronyism, it stays fresh in his mind,
Like a weed that’s hard to weed.

Misappropriation is also stealing,
But not everyone is so forgetful,
Chris, it seems, has a memory
That’s selective and deceitful.

The stock of compassion runs low,
As the stock of corruption runs high,
Chris, seems, has run out,
Of the will to even try.

In the meantime quietly sliding Steward management into unadvertised FMS and government slots.

Another slimeball who couldn’t give a shit, only in it for the money and the prestige, he will be an enthusiastic recipient of all that the EU can bestow on him. Ciantar won’t be too happy as the golden goose will have flown, she may even have to work for a living but I personally doubt that.

Why this fellow Chris treats Carmen so well? Only God knows why!!! Perhaps many others know the true reason too. Hmmmm