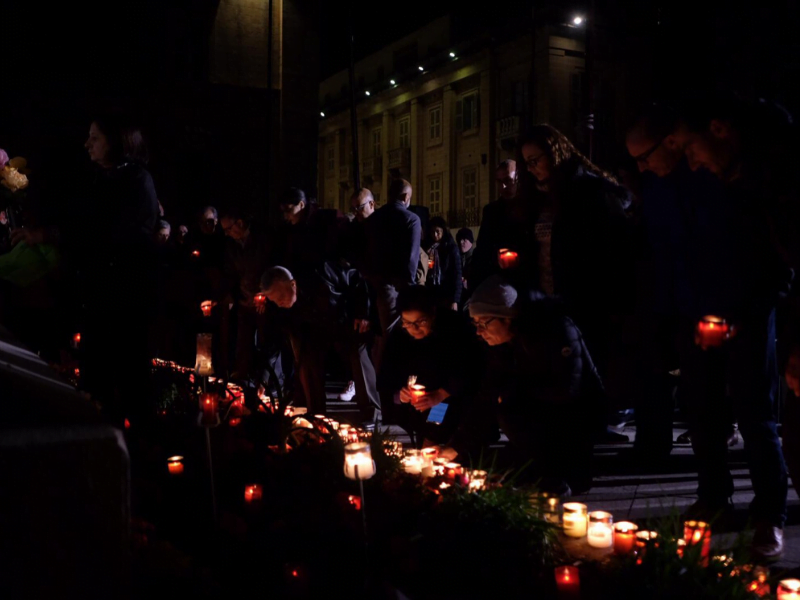 Citizens place candles at the protest memorial for journalist Daphne Caruana Galizia in Valletta to mark 28 months since she was brutally killed in a car bomb in Malta. Photo: Joanna Demarco.

‘A radical and ridiculous change’

“You are born with the right to protest. Nobody grants it to you,” Alessandra Dee Crespo said referring to Prime Minister Robert Abela’s order not to clear citizen tributes left at the memorial that were previously wiped away almost every night under Joseph Muscat’s administration.

Minister Owen Bonnici was found guilty by the highest court in the country of suppressing freedom of expression with that order, Dee Crespo said. “Yet Abela did not ask for his resignation. Abela defended him.”

Dee Crespo led the list of speakers at the vigil held at the protest memorial before the law courts in Valletta to mark 28 months since journalist Daphne Caruana Galizia was killed in a car bomb close to her home on 16 October, 2017.

She reminded the crowd of the Prime Minister’s words when Caruana Galizia’s family had requested the removal of former Deputy Police Chief Silvio Valletta from the investigation into her assassination.

“My response to Caruana Galizia’s children is that we don’t need their prejudiced advice and that the people who paid for this advice can keep it to themselves… It would have been better had they spoken about the mission of the Caruana Galizia children to hinder the investigations. Instead, they have the gall to say that the government is being hostile towards them,” Abela, now prime minister, had said in a speech in September 2018.

Valletta, the husband of former Gozo Minister Justyne Caruana, was later revealed to have been consorting with the man accused of commissioning her assassination, Yorgen Fenech. Dee Crespo said it was this government that had “normalised abuse” and while the prime minister kept insisting the institutions were working, Malta faced a new scandal with fraud in the police corps.

Today marks 28 months since Caruana Galizia was killed. “28 months of lies and slander. 28 months of insults and threats faced by Daphne’s family and activists. But it’s also 28 months that we have been meeting here calling for justice,” Tiziana Aljasem said.

Since November, there has been “a radical and ridiculous” change, Aljasem added. She referred to the arrests linked to the journalist’s assassination and the revelations of connections of those at the highest levels of government. “That’s why Joseph Muscat had to leave,” she said, referring also to Schembri who remains free. Tiziana Aljasem lighting a candle for the late Daphne Caruana Galizia at the vigil marking 28 months since the journalist was brutally killed in a car bomb on 16 October 2017. Photo: Joanna Demarco

Gorg Mallia, Head of the Department of Media and Communications at the University of Malta, referred to the dehumanisation campaign against Caruana Galizia. “They knew what they were doing. As The Shift has shown us, it was highly coordinated through Facebook, calling her ‘a witch’– a line repeated by Joseph Muscat’s supporters. That’s how they wanted to silence her, with lies repeated by trolls paid by a political party that was prepared to do anything to break her.”

The insults turned into horrible acts against her, Mallia said. He listed the door of her family home being set on fire, her dog’s throat slit, and the harassment she faced when she attended a village feast in Rabat where she had to seek refuge in a convent. “The message was clear. They could do anything to her, and with total impunity… and when all this failed to dull her spirit, they killed her… but they could never silence her. With your efforts, her voice has grown.”

And yet the authorities were still considering what steps to take against Keith Schembri who has been linked to the assassination. “Do you believe it? There is still impunity, despite the cosmetic changes by the Prime Minister so far, But justice will prevail,” Mallia said.

Yet this morning the prime minister said, “Malta is back to normality”. Andre Delicata delivered a message of hope. He said the group that held these vigils every month had brought about real change. Muscat, the man awarded the 2019 Man of the Year in Organised Crime and Corruption, was removed.

Moving forward, he said it was crucial for action to be taken to see through the democratic changes needed. First, revelations by journalists must be investigated. “Every story that is not investigated increases impunity in this country, and puts our journalists at risk.”

He also referred to the need to mobilise people to restore democracy. “Democracy is being wiped out, slowly, surely. Our friends may not all be realising this or its ramifications, and the impact that it is having on our lives. Democracy does not go out with a bang. It goes out in tiny, sometimes imperceptible steps. Till one fine day, it’s gone.”

Candles were handed out to citizens at the end of the vigil “to remember Bonnici’s order to remove tributes from the memorial” and his breach of human rights with every candle removed. People hold up signs with the word ‘resign’ next to a cardboard cut-out of Education Minister Owen Bonnici in front of parliament in Valletta. Photo: Joanna Demarco.

“He remains Minister of Education despite being found guilty of breaking the law… What message is Bonnici now giving to our children? That if you call for justice for a journalist killed, you risk the wrath of the Labour Party’s supporters? Bonnici must resign,” Dee Crespo said concluding the vigil.

“We said that about Muscat and everyone said, ‘no’. But we were proven right. We won’t forget Bonnici. He must go. If the prime minister doesn’t make that move, he’s telling us that it doesn’t matter that our human rights were breached. In that case, we will demand Abela’s resignation.”

Activists then proceeded to Parliament Square where they placed a cardboard statue of Bonnici and held up signs with the word, ‘resign’.