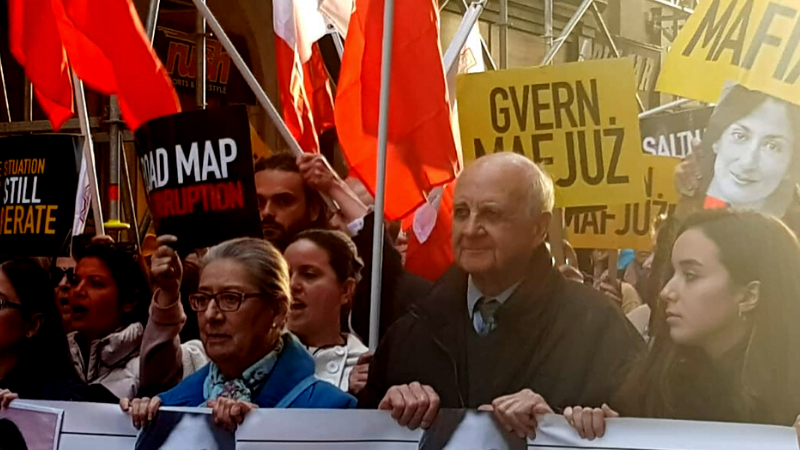 ‘The only support Daphne had was from her readers’ – Michael Vella

Updated with the testimony of Daphne Caruana Galizia’s family members

The parents of murdered journalist Daphne Caruana Galizia told the members of the public inquiry into her assassination that they were worried about their daughter’s safety and the lack of protection for her from the authorities.

“On one occasion we were having supper at a restaurant together and there was a report on a website saying Daphne was there and describing what she was wearing,” her mother Rose Vella said this afternoon while testifying.

“The next time she returned to the same cafe, she was told by the owner that the premises were searched and turned upside down following her visit,” Caruana Galizia’s mother added.

On 14 October, two days before she was killed by a car bomb, Caruana Galizia visited her parents and told her mother that she would bring her birthday present on Monday or Tuesday.

“I was so worried,” Vella said, in tears. “I told her father that I was scared Daphne would be subjected to a violent attack. And 40 hours later she was assassinated in a car bomb. If the reports had been investigated immediately, she would still be alive today.”

Vella testified how the constant worry and tension caused her health problems that resulted in a stroke. The doctor told her, “I’m sure this is about Daphne,” leaving her surprised because she was unaware that the doctor knew she was her mother.

“I was so worried, I told her father that I was scared Daphne would be subjected to a violent attack. 40 hours later she was asassinated in a car bomb”, said her mother speaking for the first time.#DaphneCaruanaGalizia #publicinquiry pic.twitter.com/ZEq4a75ncj

In early 2017, months before the murder, a person who looked like a warden turned up at the Vella home asking if Caruana Galizia lived there because there was an issue with her income tax. Vella mentioned it to her daughter when they were guests at the Phoenicia Hotel. But now, in light of recent news reports, she knows that “at that time Daphne’s movements were being monitored by people planning to kill her.”

As the hearing continued, Michael Vella took the stand and spoke about his perception of the threats to his daughter leading up to her assassination, which he said had increased when the Labour Party took power in 2013.

Police Commissioner John Rizzo, who Vella said had always done his job, was removed and replaced with other Commissioners who would serve the people who appointed them, as opposed to the people they were supposed to serve.

“My worry about Daphne’s safety increasingly became a matter of concern,” he said.

Those concerns increased following the 2017 general election when people from the Nationalist Party “took to social media asking for Daphne’s elimination”, blaming her for the downfall of the PN, and again later for its change in leadership.

“Efforts to silence Daphne became more likely to be successful as she was totally isolated and no effort was made to protect her. The only support she was offered was from her readers,” Vella said.

In tears, Vella told the Board of Inquiry that something could have been done to protect her. “My daughter was killed by a car bomb, and had the authorities concerned done their job at the time, my daughter would still be alive today.”

Part of the hearing took place behind closed doors when a person believed to be working in the media said they had information about the case. The Board of Inquiry agreed to listen to the testimony, but the person’s identity and testimony will remain private. Caruana Galizia’s niece, Amy Mallia, took the stand later, and said she had gotten used to hearing different rumours that were being spread to stop her aunt from writing — among them, a story that her grandfather had a secret family in Sicily, and that she was Caruana Galizia’s illegitimate daughter.

Neville Gafa once saw her walking with Caruana Galizia and took photos of the two of them, which were then uploaded on his Facebook page, Mallia said. She was still a minor at the time, and the photos were uploaded without her parents’ consent, she added.

“My family was, and still is, subject to a lot of hate,” she said, adding that “a classmate once told me that it would be better if a bomb were placed under my seat”.

Megan Mallia said her aunt would still be alive were it not for the corruption of former Chief of Staff Keith Schembri. “Since the attack, we have had no time to grieve in dealing with the trolls and the hate levelled at us,” she said.

Helene Asciak, Caruana Galizia’s sister, started her testimony saying: “’There are crooks everywhere you look now. The situation is desperate.’ – To many, these are Daphne Caruana Galizia’s last words. To me, my sister’s last words were those she said to me as I stepped out of her car, right outside my home, when she dropped me off in the evening of 14 October, 2017. The very same car in which she was killed, less than 48 hours later.”

From then on, the battle for justice began. “When my sister’s life was taken from her, our right to know was taken too. I can never bring my sister back, I know that, but what we can do is call for truth and justice. Justice must be served,” said a visibly emotional Asciak. Mandy Mallia, also Caruana Galizia’s sister, told the inquiry how the family was photographed while visiting the journalist’s grave, and how people passing them in a car at the bomb site in Bidnija made explosion noises at them through the window.

She also recounted how a man once wrestled a picture of Caruana Galizia out of her father’s hands and threw it in a bin at the Valletta protest memorial. “This was in broad daylight in the European Capital of Culture of 2018,” she said.

Mallia also recalled being stopped by Animal Welfare services to check whether Caruana Galizia’s dog was microchipped. “We felt it somewhat of an intrusion for something as mundane and simple as walking a dog.”

She went on to describe the online hate campaigns against her sister. “The theatre staff at the hospital — people whose vocation it is to save lives — celebrated my sister’s horrific death,” she said. Caruana Galizia was also referred to as a “hate blogger” in an attempt to dehumanise her, Mallia added.

She said when her daughters would go out with Caruana Galizia, it was always at the back of her mind that someone might have tampered with the car, but she wanted them to have a normal life.

“Daphne should be alive today,” she said. “Justice for Daphne also means justice for the crimes she exposed. Anything less would mean that justice would not be served.”

In an ongoing effort to preserve the evidence of those crimes, the inquiry ordered that phone data related to Economy Minister Chris Cardona’s trip to Germany, revealed by Caruana Galizia in her blog, should be preserved as part of the public inquiry.

Not ‘business as usual’ in Valletta