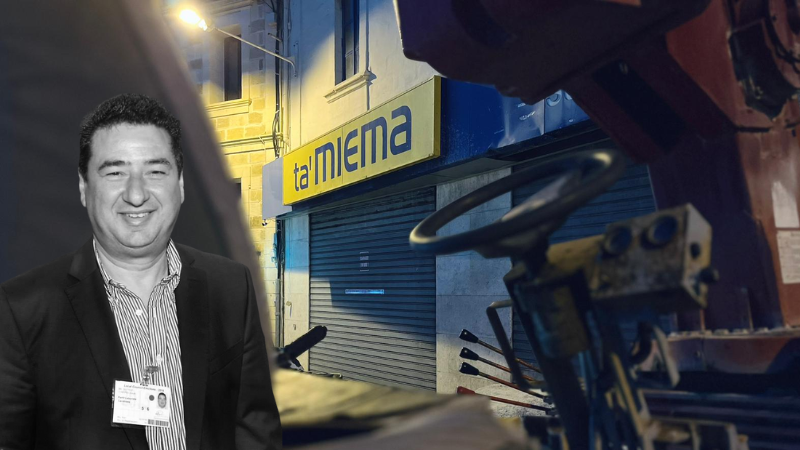 As the Gozo Channel Company continues to carry out expensive structural work against measly compensation on a property belonging to the private practice clients of its chairman Joe Cordina, and for which the company is paying hundreds of thousands of euros in rent while it remains unoccupied, it turns out there are other nearby properties the company could instead be using at no cost at all.

The Shift is informed that the plan is for workers from Gozo Channel’s head office to be transferred to the Ta’ Miema supermarket property in Mgarr belonging to the chairman’s auditing clients while the head office is being refurbished. But, in a twist, the supermarket needs major work to the tune of €500,000 because of its serious structural defects before the employees are able to temporarily move there.

Most of Gozo Channel’s back office workers, such as accountants and clerks, are situated at the head office building in Victoria. Workers in Mgarr are to be transferred to the chairman’s client’s supermarket property once extensive work is completed there, at the taxpayers’ expense. According to the 10-year lease arrangement, the chairman’s clients will be paid a total of almost €700,000 in rent, despite the fact that the state-owned company has already lost out on three years of use as temporary due to the poor state of the dilapidated property.

Speaking with The Shift, Borg pointed out how there is “undoubtedly” no shortage of office space available to the company for the purpose in question, and that the public company could save thousands upon thousands of euros by using these premises instead of both leasing and fixing up the property belonging to the chairman’s private auditing practice clients.

These include three rooms of office space at Gozo Channel’s Cirkewwa terminal  hat are not in use and which currently stand completely empty.

In addition to those, there are two other office spaces that are not being used to their full potential. They are, in fact, only being used to half their potential, according to Borg, with two or three back-office workers in each room when they could easily accommodate four or five.

“The government simply wanted to use the private property because the owner is a client of the chairman,” Borg says.

“There is sufficient space at both the terminals that could be used temporarily and, in the process, avoid thousands of euros in taxpayer money being wasted.”

In all, the MP explains, there are a total of seven staff members stationed at the brokerage office in Victoria, which houses the accounts and procurement departments.

The employees of the Mgarr office, which is to be refurbished, will be temporarily relocated to the supermarket property.

According to the Gozo shadow minister, there is an easy workaround if the company was not interested in lining the chairman’s client’s pockets.

By way of compensation for the cost of work on the property being footed by Gozo Channel to arrange the building, the chairman’s clients and landlords, A & J Hili Ta’ Miema Ltd, have agreed to let the company use the property for an additional 18 months ‘free of charge’ once the 10-year, €700,000  lease elapses, Gozo Minister Clint Camilleri recently confirmed.

The former supermarket was meant to have started being used as Gozo Channel offices almost three years ago, in January 2020 but instead, that time has been used trying to render the building structurally fit for occupation. The minister said that Gozo Channel has so far paid the chairman’s clients €62,400 a year, or €5,200 a month, for the lease even though the company has never used the property. The facade of the former Ta’ Miema supermarket, where major structural works are being carried out at the taxpayers’ expense

According to the 10-year deal, which is now already at the end of its third year, the rent will increase by another six per cent as from next year.

While it will have already paid its chairman’s clients a total of €179,000 in rent by the end of this year, without ever even using the building, Gozo Channel is also supplying an additional €500,000 to fix the property up.  In the meantime, it is not yet known when it will be ready for use, meaning more time, and rent payments for nothing.

Seems like clear misuse of public funds. Nobody Accountable – that is Malta!