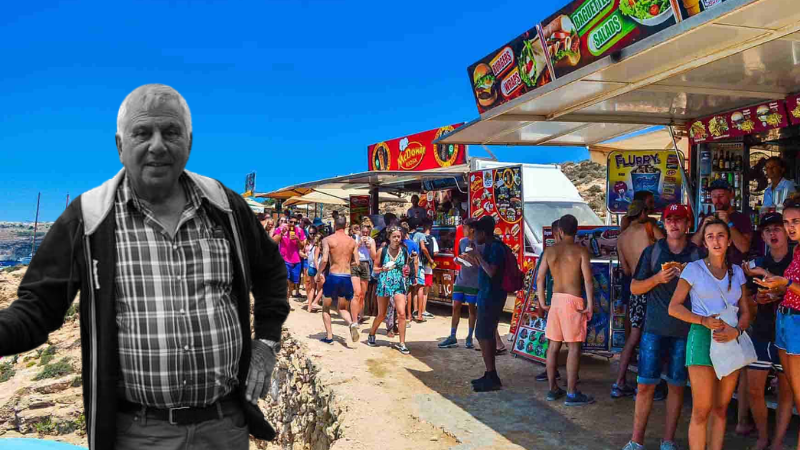 The Planning Authority is refusing to explain why it has issued an enforcement order against the owner of an illegal kiosk in Santa Marija Bay in Comino but did not act in against other illegal kiosks at the Blue Lagoon, where it’s business as usual for Labour Party activists and people close to Gozo Minister Clint Camilleri.

After an enforcement order was issued against Sandro Ciliberti, who has been running a kiosk at Santa Marija Bay for years, The Shift asked the Planning Authority why it had not taken similar action against other infringements at the Blue Lagoon.

The Planning Authority did not reply to questions.

The Shift has reported how the operators of the kiosks and deckchairs at the Blue Lagoon involve developer Daniel Refalo and Mark Cutajar, the brother of Labour MEP Josianne Cutajar and a canvasser for Clint Camilleri,

There’s also a Victor Refalo running a kiosk, known as tal-Exka, among those calling the shots at the Blue Lagoon. According to the Malta Tourism Authority’s website, none of the Comino kiosks has a permit. Kiosks must also be left on wheels, and be removed every day. Permanent structures are not allowed.

While this is clearly not the case, the authorities continue to turn a blind eye to the obvious infringements.

Refalo Tal-Exka is a former Żebbuġ Labour Councillor. In 2016, he was sentenced to prison for threatening a member of the Marsalforn local council when carrying out illegal works at his other kiosk in Marsalforn.

Well-informed sources told The Shift that Refalo is a staunch canvasser of Minister Clint Camilleri and that he is making thousands of euros a week from his unlicensed kiosk in Comino.

Following illegal works carried out by the Gozo Ministry a few months ago to fix up the road where the kiosks operate and to dig a culvert to begin providing them with electricity, Refalo was interviewed on Labour’s One TV showering Minster Camilleri with praise.

He enthused how, “Following the pandemic, business on Comino was thriving thanks to the [illegal] road works ordered by the Gozo minister”. Victor Refalo being interviewed on the Labour Party’s TV station

Ministry applies for a walkway for easier access to illegal kiosks

The ministry has now come up with a new way to make it easier for hundreds of visitors to get to the illegal kiosks.

Through the services of the Labour Party organising secretary, William Lewis, the ministry has applied (PA04650/22) to install a new wooden walkway over the garigue terrain leading to the kiosks and the Blue Lagoon.

The PA is yet to decide on the application and is awaiting the recommendations of the Environment and Resources Authority.

The Taghna Lkoll Brigade have the Minister and the Prime Minister by the Balls.

Illegality reigns supreme. Obviously provided you are in the good books of some high and mighty Minister, parliamentarian, party member or better still party donour.
This is Democracy as defined by Malta’s Constitution?
What a shame PL

PA = Shame and destroyer of Malta, Gozo and Comino!
Just only puppets of the PL-Looters.

PA is not simply a puppet for f the PL, it has actively joined the party. If we are to save some fragments of the Maltese heritage it needs to be disbanded

What about the illegal work done by minister Clint Camilleri?