Daniel Refalo, Mark Cutajar are the two individuals who own the entire deckchair racket at Blue Lagoon

The associate of construction tycoon Joseph Portelli, Daniel Refalo, and the brother of Labour MEP Josianne Cutajar, Mark Cutajar, are the two individuals who own the deckchair rental operations on Comino’s Blue Lagoon.

Following Saturday’s action carried out by NGO Moviment Graffitti, which has been met with widespread praise from the general public following the group’s sweep of deckchairs from Blue Lagoon, The Shift has confirmed that the operators in question are two well-connected individuals with close ties to the Labour Party.

Refalo, who has been one of the individuals profiting immensely from the Planning Authority’s favourable treatment of Portelli’s massive development projects across Malta and Gozo, publicly refers to his ownership of one of two deckchair provider operations on his own personal Facebook profile. 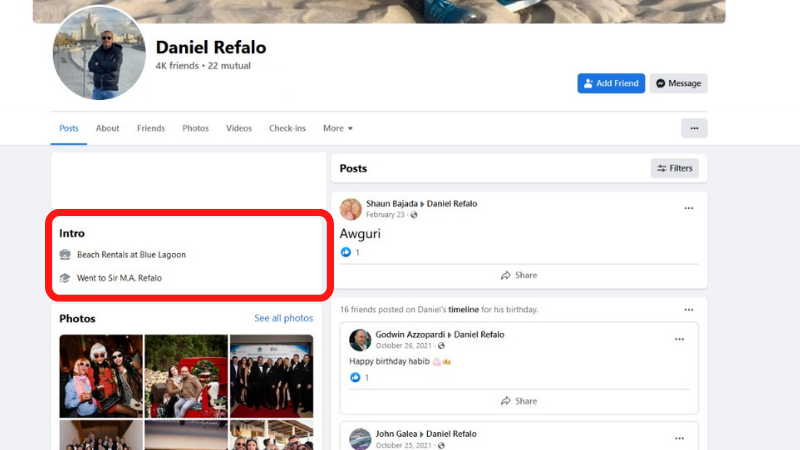 A screenshot of Daniel Refalo’s Facebook profile showing his link with deckchair operations at Blue Lagoon.

Earlier today, the Planning Authority’s Commission approved an Outside Development Zone swimming pool extension to a Portelli project at the very edge of a protected ridge in Marsalforn valley, in spite of multiple recommendations for refusal and several objections.

Ironically, Refalo and Cutajar had sought to “put the record straight” with an opinion piece published by The Times of Malta following yet another summer in which there was public uproar over the way Comino was already suffering from increasing commercialisation. The operators said they are not to blame for the “chaos and exploitation” seen on the island.

“The simple reality is that there are now too many visitors attempting to enjoy the Blue Lagoon on its busiest days, leading to chaos, with or without deck chairs and umbrellas,” Refalo and Cutajar had written, arguing in favour of a regulated approach.

Fast forward seven years later and not only have authorities failed to rein in the situation but they have allowed it to become worse.

Tourism minister Clayton Bartolo’s claim that Malta Tourism Authority officials were going to ensure that the occupation of public land with deckchairs would be dealt with on the same day activists happened to remove them was met with mockery.

When answering questions from journalists on Monday, Bartolo further added that the sandy beach area of Blue Lagoon will no longer have deckchairs in place and that there will be a ‘substantial’ decrease of deckchairs and sunbeds in the area.

While acknowledging that the area has suffered from a lack of enforcement over the years, Bartolo denied that this aspect was his ministry’s responsibility while nonetheless promising that enforcement will be carried out.

In a brief statement reacting to Bartolo’s comment, the activist group did not sound all too impressed – while they expressed “some satisfaction that something has been done”, they insisted on the other demands which have not yet been met, including a long-promised Comino management plan.

The struggle to free up Comino’s iconic beach for the benefit of the public has been ongoing for years, culminating in last Saturday’s protest.

In a brief press conference following the clearing of all deckchairs and umbrellas from the quayside and the sandy beach at Blue Lagoon, Moviment Graffitti activists called for a master plan for the island that would limit activity on the island as well as set defined areas for operators.

The group is demanding that sunbeds and umbrellas should be rented out on-request only, that the number of kiosks be severely reduced and that all operations should be subject to strict permit conditions, a ban on loud music and generators and making operators pay a direct financial contribution for the upkeep of the bay.

I was about to divulge the news myself, but the ShiftNews just beat me to it! 😉

Neither respect for the archipelago nor its citizens. Official hooliganism at its worst.

Ah now it is clear why there is such a lack of enforcement and the impunity these men enjoy?

“there will be a ‘substantial’ decrease of deckchairs and sunbeds in the area ”
I do not want a ‘reduction’ from these people. I want a total ‘get out of there and never try this again’ approach. ‘Reduction’ to these corrupt only means back to the same situation in a couple of weeks.

Very well said. There should be no beds or umbrellas or kiosks left in place
It should go back to how it was years ago
It belongs to the public and should be used by the public

Not surprised at all.

Now investigate who owns the gabbani! They both work with MTA!

And a High Rank Official of Transport Malta based in Gozo.

Daniel Refalo is also a beneficiary of eu funding as a young farmer, as was chloe and her brother and other friends…