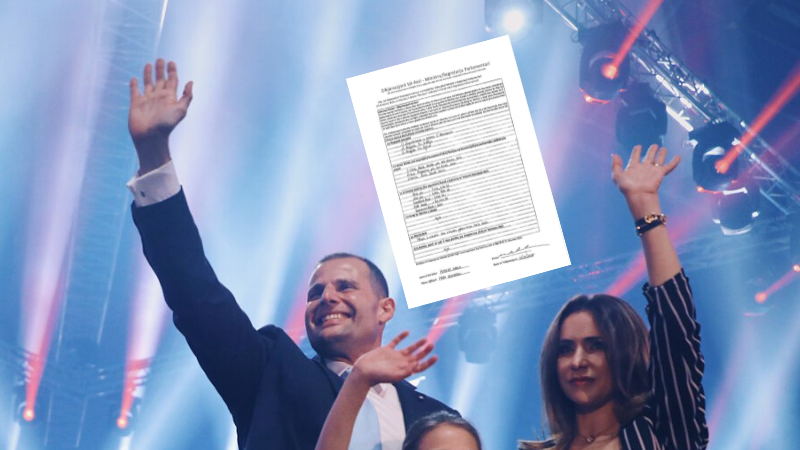 None of the thousands Prime Minister Robert Abela received in rental income on his Zejtun property from two prospective Russian passport buyers was declared in his declaration of assets or in his tax returns.

In his declaration of assets presented to parliament since taking over from his disgraced predecessor Joseph Muscat, Abela made no reference to his income as all the rest of his Cabinet colleagues did. In defiance of the code, intended to increase transparency, Abela was scant with information required and instead declared only that his income in 2019 was “according to his tax return”.

Tax returns are not automatically publicly available. Abela’s declaration was a clear attempt to deviate attention from the hundreds of thousands in earnings he made, particularly from government coffers, before becoming prime minister.

While other Cabinet members who own rental property and declare it, such as Jose Herrera, Anton Refalo, Clint Camilleri, Silvio Parnis and Alex Muscat, all inserted details in their declarations of the rental income they made during the previous year, the prime minister did not give any details of what he was earning from his uninhabited property in Zejtun – a scandal that has hit him hard in the electoral campaign.

On Sunday, The Times of Malta revealed that Abela rented out his two-tumoli property on ODZ land in Zejtun in 2017 to two Russians applying for a passport.

The Zejtun property is at the centre of controversy after Abela acquired it for a “bargain price” after massive illegalities were sanctioned while Abela was the Planning Authority’s lawyer.

Admitting to the rental agreement, Abela, whose legal firm was also selling passports when he was an MP, did not divulge details of the rental contract, including its terms, how long it was for and how much he made from his attempt to help the two Russians buy Maltese citizenship.

The ODZ bargain property bought by Abela was never lived in since he acquired it in 2017. One of the requisites of Malta’s much criticised cash-for-passport scheme required prospective buyers to declare a ‘genuine-link’ with Malta through the acquisition of property or a rent agreement on tens of thousands a year.

No mention in Tax Returns

Prime Minister Abela has also refrained from specifying his rental income in his tax returns.

According to law, the Abelas would not have needed to declare this income if they had originally declared the contract with the tax authorities and paid a 15% tax on all the income made.

So far, the PM has failed to state whether the rental contract was actually declared (with tax authorities) and tax paid on proceeds.

According to his 2019 income tax return, seen by The Shift, (see declarations) Robert Abela and his wife, declared a turnover from their legal firm of almost €7,000 a week. However, they deducted a third of this income as “claimed expenses” ending up with a gross profit of €227,254, or €4,370 a week.

By the time Robert Abela became prime minister he was earning almost €19,000 a month after tax, mostly from the Planning Authority. No other income, either from rents, or profit from property speculation with business partners, which included the Managing Director of Bonnici Brothers, was declared.

According to his 2018 tax return, Abela and his wife Lydia declared a profit of almost €2,500 a week. However, their income was much higher than this as they declared making €157,000 in ‘expenses’ during the year, deducting them from their taxable income.

Abela’s honoraria as an MP at €23,176 was the only other income declared for that year. In 2017, the year Abela was elected to parliament for the first time, the prime minister declared a very modest income from his profession, earning just €36,000 only after deducting €88,000 from his turnover as ‘expenses’.

The breadwinner during that year was his wife Lydia, a partner in his law firm, who in 2017 declared raking in almost €150,000. Apart from receiving his first honorarium as a new MP, Abela was also Chairman of Casma Ltd — a government company responsible for the management of property on behalf of the government, another concession granted to him by former prime minister Joseph Muscat.

A number of questions were raised during the ongoing electoral campaign on Robert Abela’s unexplained wealth and questionable dealings which surfaced during the time before he became prime minister.

Apart from accumulating a multi-million portfolio of properties without any outstanding loans – a large seafront penthouse in Marsacala (his current residence), a two-tumoli mansion in Zejtun, with an estimated market value of over €2 million and a large farmhouse in Xewkija, Gozo, the Abelas also spend their summers on an Azimut yacht.

So far, Abela declined to give details of his dealings with Christian Borg – one of his clients accused of various criminal acts including the abduction of a person.

Abela is also refusing to publish the taxman’s valuation report on his Zejtun property, insisting that he just paid €600,000 for a property which according to estate agents was grossly undervalued.

The Commissioner of Inland Revenue is refusing to state whether the necessary checks were made according to law.

Meanwhile, the Planning Authority, which was paying the Abelas at least €17,000 a month, has turned down requests to publish all the payments made to the prime minister during the past years.

“There are crooks everywhere you look now. The situation is desperate”

Be careful, although not in the income tax return, rental income could be declared through the TA 24 form subject to 15% FWT due on April 30th.

Was THAT the only time he used the Zejtun address as front for passport seekers?

Robert Abela, conveniently, missed out listing in his belated Parliamentary tax/assets declaration, an undivided share of 1/2 of a property in Iklin which he holds with his spouse Lydia, and 2 partners, Gilbert Bonnici and Simon Buhagiar, who each hold 1/4.
The property was a terraced house in Iklin which was developed into apartments and garages, and which was purchased in November 2016 for Euro 360,000.
The 8 apartments/garages were sold between 2017 and 2018, at an average of Euro 115,000.
More details on this will be given in another
comment, possibly tomorrow.
At this stage, it was important that I highlight that Robert Abela made an incomplete declaration, and is therefore not declaring his true position.
This information is all recorded in his public registry searches, and therefore accessible by anyone.

The pact of oblivion