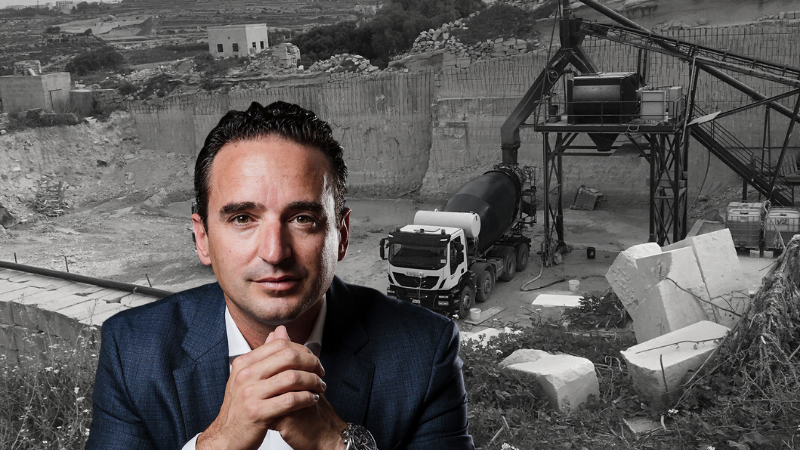 A group of Gozitan businessmen, led by construction magnate Joseph Portelli, have been given a €9 million contract by the government to build a new road linking Rabat and Marsalforn, The Shift can reveal.

One of the companies participating in this lucrative tender, PRAX Concrete Ltd, is the operator of an illegal concrete batching plant in Kercem set up in an illegal quarry owned by the government.

In addition, the same businessmen illegally took over another quarry opposite the batching plant to dump construction waste without any permits.

Investigations carried out by The Shift show that a few weeks ago the Gozo Ministry awarded a €9 million tender for the construction of the road to GP Gozo Consortium, which includes Gatt Tarmac Ltd and Prax Concrete Ltd.

It is unclear whether the two companies in the joint venture hold an equal stake, but the tender is expected to rake in significant profits.

Asked by The Shift to explain the award of the tender to Portelli’s consortium rather than blacklisting it for illegalities, Gozo Minister Clint Camilleri shifted the blame onto other government authorities.

“It is not the remit of the Minister to intervene in public procurement procedures related to the outsourcing of supplies, services or works,” Camilleri told The Shift.

While stating that “other alleged shortcomings are the competence of other authorities”, referring mainly to the Planning Authority and the Lands Authority, Camilleri insisted that his Ministry “will ensure that the raw material used in this project is provided by authorised sources”.

Portelli and his associates illegally mounted the concrete batching plant in early 2019, through PRAX Ltd and other companies. Despite reports of the illegalities exposed by The Times of Malta, as well as various stop and enforcement notices issued by the Planning Authority, the batching plant went on to become fully operational and continues to be used.

Despite the flagrant abuse, no police reports have been filed to seal off the illegal plant.

In July 2019, the Lands Authority, run by former Labour CEO James Piscopo, declared it was investigating the illegalities. Yet no case has been filed in court despite the Authority having a raft of lawyers on its payroll, including former Gozo Minister Justyne Caruana who was assigned cases in Gozo.

Asked what is stopping the Authority from reclaiming public property, a spokesperson for the Lands Authority told The Shift that a legal letter was sent that was completely ignored.

Meanwhile, the illegal batching plant occupying public land keeps operating day and night to supply concrete to various projects on the sister island including those commissioned by the Gozo Ministry.

Utter contempt for the rule of law!

The rule of law is now defined as: ‘the law of rule and shambles’

Asked what is stopping the Authority from reclaiming public property, a spokesperson for the Lands Authority told The Shift that a legal letter was sent that was completely ignored.

And then I was fined for a very very very minor thing.

Very well said ,and I don’t foresee any changes in the near future,because if it’s not the donkey its the cart and they change places from time to time .

Its simple : It is just a continuity of the muscat legacy.

Gozo has it’s own thriving habib club, sponsored by the Malta mafioso.

9 million down the drain as the existing road only needs resurfacing. There is absolutely no need of a new or widened road. This will only take up more cultivated fields and destroy trees.

The CORRUPTION has not gone, but merely water down and as usual passing of the buck!!!???

How the virus spreads

Mafia at its best

Electrogas: A €100,000 show selling a lie to boost Joseph Muscat’s ratings before 2017 election