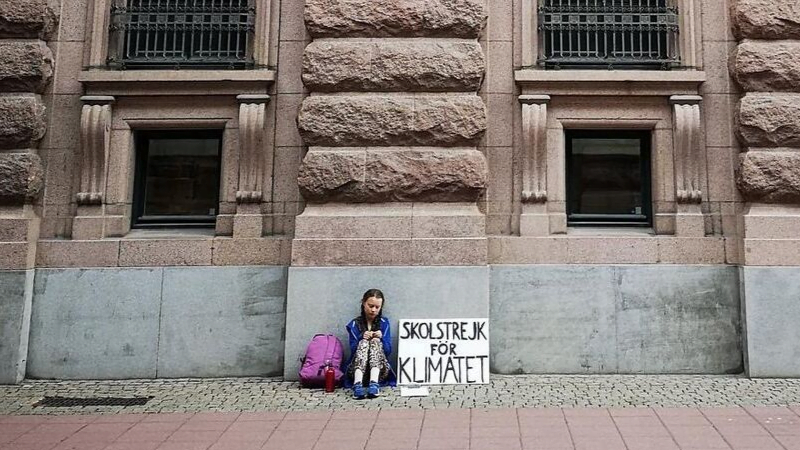 Greta Thunberg, one year ago, at her climate strike outside the Swedish parliament every Friday.

Greta Thunberg and 15 children from across the world are taking action and petitioning the UN to hold five of the world’s largest emitters accountable for their ongoing inaction on the climate crisis, in a campaign called ‘Children vs Climate Crisis‘.

Following Thunberg’s speech on Monday at the UN Climate Action Summit in New York, the 16 children filed a complaint with the UN against Brazil, Argentina, Turkey, France, and Germany, saying these countries had violated their human rights by not taking action to stop the emergency climate crisis. The five countries are accused of violating the UN Convention on the Rights of the Child.

The 16 children said they were alarmed by the environmental changes in their own corners of the world. They joined forces to highlight the global scale of the crisis.

“Once again, this isn’t just about just five nations. They were named in the suit since they are the highest emitters that have ratified the UN Convention of the Rights of the Child. China, USA, Saudi Arabia, Russia, etc haven’t,” Thunberg said.

Once again; this isn’t about just 5 nations.
They were named since they are the highest emitters that have ratified the UN Convention of the Rights of the Child, on which the complaint is built. China, USA, Saudi Arabia, Russia etc haven’t.
Visit https://t.co/VxeelgLkDi for more. https://t.co/TKQjJ3KjsR

The children, from 12 countries, are under 18 years old, with the youngest signatory being 8 years old.

Thunberg gave an impassioned and tearful speech at the United Nations Climate Action Summit in New York on Monday when she addressed world leaders on the lack of action on climate change.

“I should be back in school on the other side of the ocean. Yet you all come to me for hope? How dare you! You have stolen my dreams and my childhood with your empty words,” the 16-year old Swedish climate activist told world leaders.

She began protesting alone in August 2018 outside the Swedish parliament during school hours with one placard that read: ‘School Strike For Climate’.  She continues to strike from school for the crisis every Friday, together with millions of children across the world who have taken up her call for action. Greta Thunberg one year ago (left), now joined by four million people in different cities around the world in protests last Friday.

She sailed to the US on a zero-emissions boat to address world leaders: “People are suffering. People are dying. Entire ecosystems are collapsing. We are at the beginning of mass extinction. And all you can talk about is money and fairytales of eternal economic growth. How dare you!”

Thunberg told world leaders they were “still not mature enough to tell it like it is”.

“You are failing us. But young people are starting to understand your betrayal. The eyes of all future generations are upon you. And if you choose to fail us I say we will never forgive you. We will not let you get away with this. The world is waking up. And change is coming, whether you like it or not,” she said

She said the science on the crisis has been evident for more than 30 years. The remaining carbon emissions budget will be gone in around nine years. Yet, “the politics and solutions needed” were still nowhere in sight.

On 20 September, the world’s largest environment and climate protest action saw over four million people strike from school and work for a Global Climate Strike to demand action on the climate crisis and destruction of the environment. Close to 6,000 protests across 163 countries were held demanding action, according to 350.org.

On Twitter, Thunberg called for another Friday of climate actions this week.

Last Friday over 4 million people striked for the climate.
This Friday we do it again!
170 countries and 6383 events so far in #weekforfuture
Find or register your strike at https://t.co/G06WbXNvl1 or local websites.
Spread the word!#FridaysForFuture #ClimateStrike pic.twitter.com/VXCnPQzw6a

Environmental activists from Extinction Rebellion and NGOs in Malta held a protest outside the Maltese parliament in Valletta on the day of the international protests demanding the government declare an international climate crisis.

Yet the action taken by the Maltese government on the same day was to launch a road as “a gift” to the Maltese public (a gift taxpayers funded) when the uprooting of hundreds of trees to make way for roads has been a controversial issue on the island, leading to protests for environmental protection.