Growing concerns that State-owned PBS is failing in its constitutional obligation to impartiality by under-reporting stories that cast the government and the Labour Party in a bad light are confirmed by an analysis of PBS’ social media data by The Shift News.

A recent editorial in The Malta Independent described PBS’s lack of impartiality as “disgraceful”. Reno Bugeja has run the PBS newsroom since Labour leader Joseph Muscat’s first election in May 2013 and has come under fire for his pro-government bias.

TVM broadcaster and chair of the Institute of Maltese Journalists (IGM) Norma Saliba was also appointed to a government advisory board, a position she will retain until 2020. Data was scraped directly off Twitter using software written for The Shift News that filters tweets by keywords. The 3,200-tweet limit is imposed by Twitter. Re-tweets of external content were excluded from the analysis.

An analysis by The Shift News of 3,200 of PBS’s most recent tweets from its only twitter account, @TelevisionMalta (for TVM), confirms these concerns, revealing consistent under-reporting of major scandals that dominate all other media outlets except Labour Party-owned media outlets.

The TVM Twitter account has over 9,500 followers and its tweets are links to PBS content. TVM is Malta’s most popular television station with a 39.1% national audience share, followed by Labour Party-owned ONE with 14.2% and Nationalist Party-owned Net TV with 10.7%. This contrasts sharply with independent media outlets The Malta Independent, The Times of Malta, LovinMalta and MaltaToday, which tweeted an average of 36 stories each on Pilatus Bank while Nationalist Party-owned Net tweeted 29 stories.

State-owned TVM and Labour Party-owned ONE News’s coverage of Pilatus Bank was 88% lower than independent media.

Similar conclusions are reached when analysing tweets using the words“corruption” or “korruzzjoni”. While TVM and ONE tweeted just two stories each that explicitly use the words, the same independent media outlets tweeted an average of 14 stories each. Net tweeted 21 stories.

State-owned TVM and Labour Party-owned ONE News’s coverage of corruption was 86% lower than independent media. 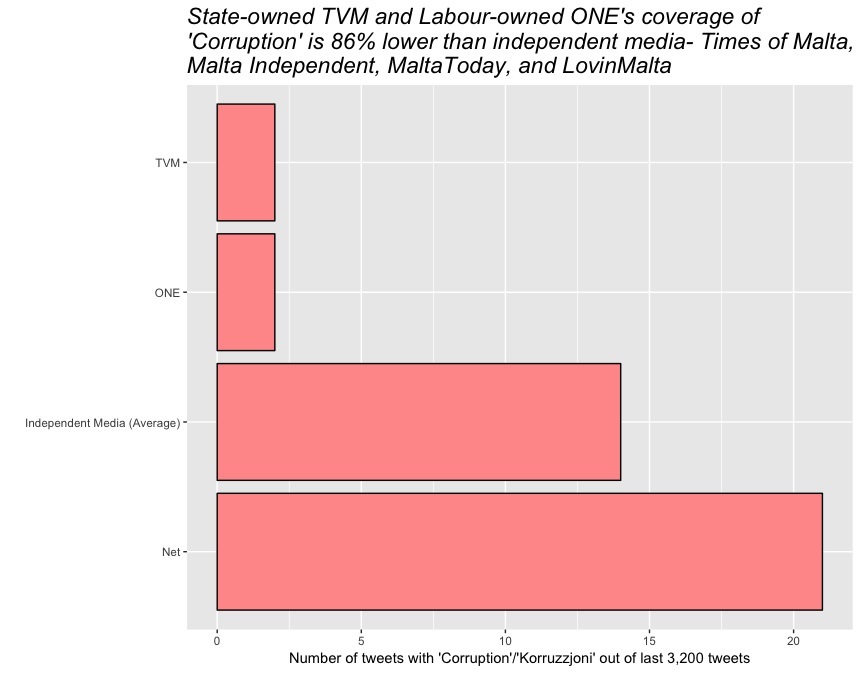 The Shift News uncovered clear patterns in the Twitter data:

According to the twitter data analysed by The Shift News, PBS appears to be in breach of the Constitution’s Article 119, which obliges broadcasters to report on politics with due impartiality; the Broadcasting Act’s article 13.2, which demands that news is presented with due impartiality and is given sufficient time, and PBS’s own Guidelines on the Obligation of Due Impartiality.

TVM and ONE under-reporting news that is critical of the government creates a “media blackout,” governing party-enforced censorship of news related to certain topics it does not want covered.