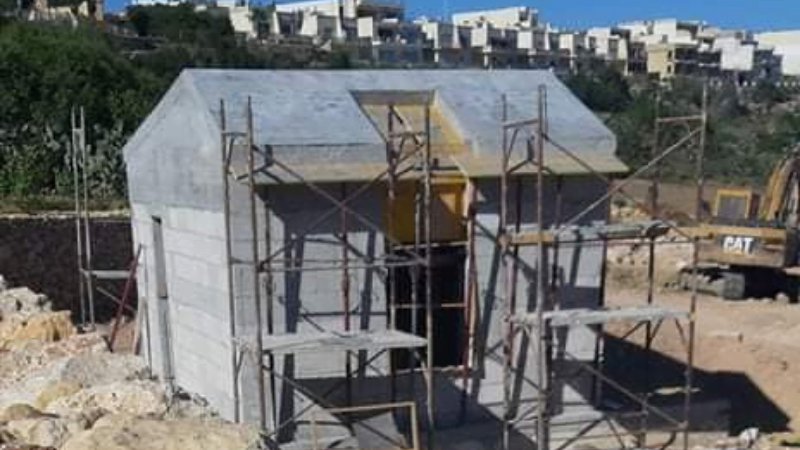 Chloe ‘the farmer’ anticipates snow on her land

Reservoir also built without a permit adds to site’s illegalities.

Surprising developments continue to mushroom on the 18 tumoli of arable land in Nadur belonging to Chloe Portelli – the 24-year-old daughter of Gozo construction magnate Joseph Portelli – as an ‘agriculture store’, controversially approved by the Planning Authority earlier this year, has not been built according to plan while a reservoir has been added without a permit.

In yet another defiance of planning laws, ‘Chloe the farmer’ as she has come to be known after registering as a farmer seemingly to access benefits and permits related to agricultural land, has decided to go against the permit she was given to create additional space for her ‘agricultural store’.

Instead of the flat roof in plans submitted for a permit, she built a gable roof – normally associated with Nordic countries due to snowfall – creating an unusual triangular roof structure, complete with a skylight, for the ‘storage of her crops’. Plans submitted for sanctioning of a reservoir built without a permit.

The site enjoys unobstructed sea and country views in one of the most idyllic spaces in Gozo. Architects consulted by The Shift said the only reason for this design, which veers from the approved permit and does not fit within the Maltese landscape, is to make the store bigger from the inside with the possibility of having an internal attic.

“This is not the design that was approved and if the Planning Authority is to be taken seriously, it should send its inspectors and order Portelli to remove the roof and install a normal one as approved design plans dictate,” a senior officer at the Authority told The Shift on condition of anonymity.

“The roof, which can be seen from far, due to the strategic location of the store on the upper side of the 18 tumoli of land, is not even within the design landscape of Maltese farmland and jars with the rest of the Gozitan surroundings,” the officer said. View from the Gozo ferry shows the large tract of land behind the church impacted by Portelli’s development.

Illegalities continue with a new ‘reservoir’

A few weeks ago, the ‘farmer’ – the General Manager of her father’s chain of boutique hotels – filed a fresh development application to sanction a large reservoir.

The 208 cubic metre water reservoir, complete with an adjacent pump room, has already been dug up. Reservoirs are often used to ease the way to a permit for a pool on agricultural land, which is not permitted in ODZ areas.

According to the development application, the reservoir is to receive water from a natural source, which has not yet been identified by the applicant’s architect, Emanuel Vella, according to the agriculture department.

Since the application is to sanction the work, it seems that this new development has also been completed. The Planning Authority is still screening the application.

The story of the large tract of land, just beneath the iconic Kenuna Tower in Nadur, goes back to 2018 when Joseph Portelli bought the 18 tumoli of land and started building long lines of high rubble walls, dividing the land into parcels – without a permit. Despite various reports on the illegalities, the Planning Authority only issued a stop notice once all the walls had been built.

Later, after Portelli transferred the land to his daughter Chloe, and after she suddenly became a farmer, the Planning Authority sanctioned all illegalities against the payment of a small fine. The move allowed Portelli to claim some €200,000 of EU funds, allocated by the government for the restoration of rubble walls.

The Authority then also approved the permit for her ‘agricultural store’ that is now built, defying even that permit, to create more space complete with a skylight because it seems her tools enjoy a view.

The Environment and Resources Authority (ERA) had objected to the development, warning the Planning Authority that it had all the signs of piecemeal development, similar to many others already allowed all over the island, to turn an agricultural zone into a residential one, with one development application leading to another. The views Chloe Portelli will enjoy from her ‘agriculture store’.

The Planning Authority ignored ERA’s objections, as well as those of the Superintendence of Cultural Heritage and a number of environmental organisations.

This is not the first piecemeal development associated with Portelli to bypass planning laws, and he is also defying laws on various other projects, including an illegal concrete batching plant on public land in Kercem.

He is known to be a benefactor of both Labour and Nationalist Parties and their candidates, including sitting MPs. He is a regular recipient of direct orders from the government, worth millions.

Who are the sitting MPs benefitting from his donations ? I have no idea .
That would be important to know. Then investigate their links to the PA .
To start off with.

In an electoral system that thrives on a lack of transparency, it is up to citizens to question MPs and candidates before they defend them to the hilt. Stop expecting journalists, who already stick their neck out far beyond what is necessary in a democracy, to provide you with all the answers. It’s a system that does not give answers and is backed by no documentary evidence. We do what we can thanks to others who stick their neck out too to help us understand the situation. We have a duty to protect our sources. So take the hint and go make some demands. Expect better from your Party.

Why go out for politics? So much easier to control government departments from the comfort of your office or living room.

According to Frank Spencer of ‘Some Mothers do Have Them’ fame, the ‘oldest profession’ was that of a FARMER.

Was he very far from being correct? I don’t really think so!

How long will it take for the Planning Authority, that institution which, according to the Prime Minister of Malta Robert Joseph Mvscat-Abela, is working, to move in and order the compliance of the buildings with the approved plans?
The Authority moved quickly, and with full force, on a poor man at the Top of the World in Gharghur, ordering him to remove some structures of no private use.
I am not holding my breath.

What an insult to the true farmers! For those who do not know he intend to build bungalows, thats his intentions!!

With a slope like that visible from the Gozo ferry, the land of Chloe ta’ Joe would be the perfect setting for a skiing resort, if it snows.

The MAFIA have been on these islands for these last few years and now it will never stops.

It is not going to stop!