The case will be heard by the Planning Authority today where it will also consider approval of her ‘agricultural store’ with uninterrupted views.

Chloe Portelli – the daughter of construction magnate Joseph Portelli – will be asked by the Planning Authority to pay a paltry fine of €1,200 to sanction long stretches of rubble walls built illegally, without even asking for a development permit.

Once Portelli pays that fine, a grant of €200,000 from EU funds allocated to the project by the government through the Rural Developments Fund despite illegalities will be unlocked.

EU rules dictate that funds cannot be paid to beneficiaries if the project involved illegal work. Yet if the Planning Authority today approves the application to sanction the illegal rubble walls built over a stretch of 18 tumoli of land then the coast is clear for Portelli to cash in. In a separate application, also set to be decided today, the Planning Authority is also recommending approval for the construction of an ‘agriculture store’ she wants to build on a spot that enjoys unobstructed sea and country views.

In the application, the 24-year-old Managing Director of her father’s hotel chain who recently registered as a ‘farmer’ says that she will store her crops harvested from the 18 tumoli of land, which the Agriculture Department confirmed she is cultivating after some trees were planted.

In this case too, case officer Charlon Tabone is recommending approval despite objections from the Environment and Resources Authority (ERA) and all major NGOs on the island, including Wirt Għawdex, Din l-Art Ħelwa, Nature Trust, Moviment Graffiti and Flimkien għal-Ambjent Aħjar.

The Nadur local council, led by PN Mayor Edward Said (brother of PN MP Chris Said), did not file any objection to the project despite strong objections from residents. The tract of land on which the Portellis built long stretches of illegal rubble walls.

The Planning Authority is justifying the approval of the ‘agricultural store’, with the widening of a passageway paved in concrete, as fitting its rural development policy. The case officer states he is recommending approval after Portelli agreed to reduce the size from 40 to 20 square metres.

In its objections, ERA said the applicant should not be allowed to have her way after breaching the law by building long stretches of rubble walls. The Environment Authority also said the ‘store’ would have a negative impact on the environment in an area considered to be of high landscape value.

ERA also expressed concern that this supposed ‘agricultural store’ might be the beginning of something larger – possibly a new residence – built in a piecemeal fashion, as already happened in many ODZ areas using ‘farming’ as an excuse. 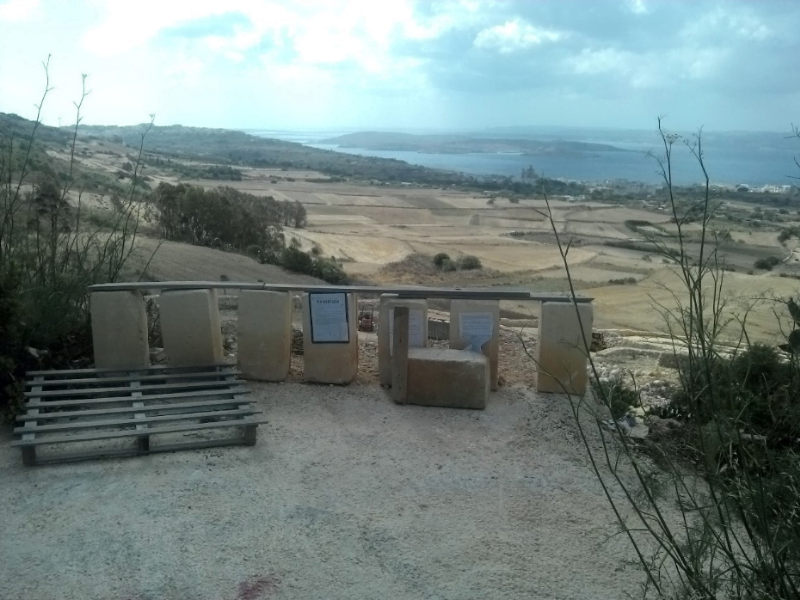 The area where Chloe Portelli wants to build her agriculture store in Gozo.

The Planning Authority is ignoring all these objections and recommending approval.

Chloe’s father, Joseph Portelli, has in recent years become Malta’s chief construction tycoon despite his name being linked to a number of controversies and illegalities.

He is operating an illegal concrete batching plant in a quarry owned by the government in Kercem and using another quarry to dump construction material without a permit. No legal action has been taken so far despite flagrant abuses on public land.

Last year, Portelli and his associates tried to turn a dilapidated room in the outskirts of Qala into a sprawling villa. While the Planning Authority gave him the permit, public outcry led Portelli to declare he was retracting the proposed development.

She is not a farmer for god sake! What a corrupt country we are living in! He is going to apply to build bungalows there. That are his intentions!

Unity: the new opiate of the people