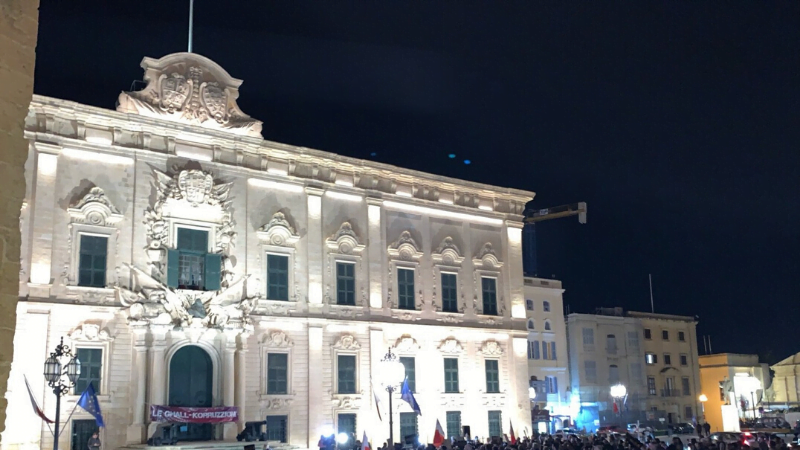 Hundreds of people filled Castille Square in front of the Prime Minister’s office on Wednesday evening demanding Joseph Muscat’s resignation after businessman Yorgen Fenech was arrested while attempting to flee Malta in his private yacht.

The pre-dawn drama came just one day after news media in Malta revealed that an alleged middleman, arrested on separate money laundering charges last week, was about to name the mastermind behind the brutal assassination of journalist Daphne Caruana Galizia.

The protest was organised by civil society groups Repubblika and #occupyjustice, who said in a statement, “Joseph Muscat is accountable for what he himself described as ‘an assault on our democracy’. Now he must leave. If he doesn’t he must be fired. His party, his parliamentary group, Parliament have the power and the duty to have him removed if he does not go of his own free will.” The protestors then filled Republic Street, as the rapidly growing crowd marched to the Daphne Caruana Galizia memorial in front of the Law Courts, . Calls for Joseph Muscat’s resignation and an end to impunity in Malta were heard across Europe.

If Joseph Muscat hadn’t protected Keith Schembri and Konrad Mizzi in 2016 my mother would still be alive. He has blood on his hands. https://t.co/T4kLXmFjyd

In a post on Twitter, Andrew Caruana Galizia, son of the slain journalist, said, “If Joseph Muscat hadn’t protected Keith Schembri and Konrad Mizzi in 2016 my mother would still be alive. He has blood on his hands.”

We got here in spite of @JosephMuscat_JM.

And there are politicians — in his cabinet — linked to the case. https://t.co/qpBUHJAFzM

Paul Caruana Galizia said, “We got here in spite of Joseph Muscat. And there are politicians — in his cabinet — linked to the case.”

This is enough! After the arrest of Yorgen Fenech, Maltese Minister #Mizzi & Chief of Staff #Schembri must now step down. #Daphne & @FbdnStories investigated exactly the links between them. It's high time the people behind the murder are brought to justice! #DaphneCaruanaGalizia pic.twitter.com/8kufpHqfbX

MEP Sven Giegold, who formed part of an EU delegation sent to Malta to investigate the rule of law in the country, said, “This is enough! After the arrest of Yorgen Fenech, Maltese Minister Mizzi and Chief of Staff Schembri must now step down […] It’s high time the people behind the murder are brought to justice!”

About time @PES_PSE & @TheProgressives take distance from @JosephMuscat_JM, who continues to protect in his Gov the corrupt exposed by #PanamaPapers & to obstruct justice on #DaphneCaruanaGalizia assassination. Failure will only tarnish socialists and social-democrats in #EU. https://t.co/ZmnVuzpAMB

Former socialist MEP Ana Gomes said, “About time the Party of European Socialists and the S&D take distance from Joseph Muscat, who continues to protect in his government the corrupt exposed by the Panama Papers and to obstruct justice on Daphne Caruana Galizia’s assassination.”

Joseph Muscat has again resisted calls for his resignation, and for the dismissal of his embattled Chief of Staff, saying that the arrest of Yorgen Fenech was evidence that the country’s institutions were working. He added that, “until now” there was nothing to indicate that any politicians were implicated in the journalist’s murder.

The Prime Minister suggested that events were out of his hands. “”The decisions [about the investigation] are not being taken by me”, he said in response to questions about whether he would demand Keith Schembri’s resignation. “I will hold back from commenting on the judicial process, justice must take its natural course…”

Muscat seems to have contradicted himself in an earlier response to journalists, in which he claimed that he had personally ordered increased surveillance after announcing plans to issue a pardon for an alleged middleman in the case. “Had I not done that,” he said, “today we might be talking of a person or persons of interest having potentially escaped”. Yorgen Fenech was exposed earlier this year as the owner of the mysterious Dubai company 17 Black, set up to pay kickbacks to the Prime Minister’s chief of staff Keith Schembri and Tourism Minister Konrad Mizzi, according to leaked emails. Daphne Caruana Galizia was working on a leak of Electrogas emails at the time of her assassination.

This is the second protest in Valletta in less than a week. Thousands of citizens gathered in Republic Street last Saturday night to call for Keith Schembri’s resignation after he dropped his libel suit against former Opposition leader Simon Busuttil to avoid being cross examined on 17 Black.