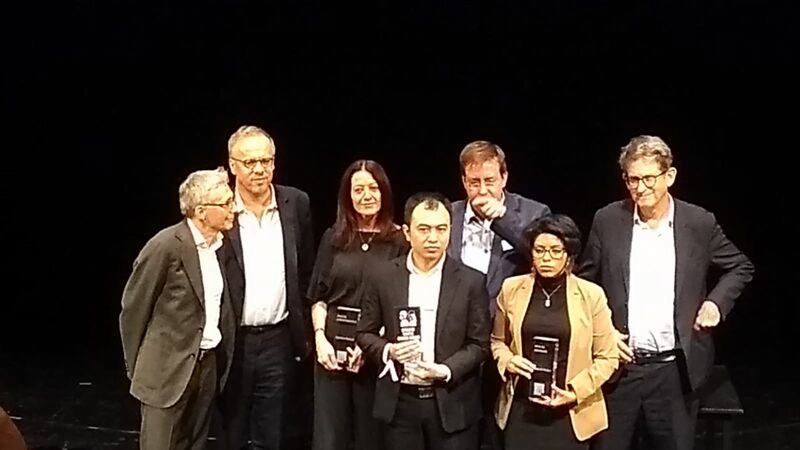 Alan Rusbridger, former editor-in-chief of The Guardian, academic, and Chair of the Reuters Institute for the Study of Journalism was among an international list of journalists, press freedom organisations and media experts who praised The Shift founder and editor Caroline Muscat for winning the prestigious Reporters Without Borders award for Independence.

… and inspiring to celebrate the independence & resilience of @muscatcar for picking up the torch of scrutiny and free journalism in Malta #DaphneCaruanaGalizia #RSF2019 pic.twitter.com/RGfpB87lBs

In a tweet following the award ceremony in Berlin last night, he praised her “independence and resilience” for “picking up the torch of scrutiny and free journalism in Malta”.

Rusbridger also gave a speech at the event during which he spoke of the crucial role investigative journalism has because “power is less likely to behave badly if it thinks it is being watched”.

Society must be “inspired” by the commitment and courage of journalists, Rusbridger said, adding that it is journalists’ “small acts of scrutiny that enable justice to be done and for aspects of history not to repeat themselves”.

He told the audience of journalists, academics and intellectuals, politicians and lawyers that journalism was “not just a job, it’s a calling, an act of service, an act of necessity”.

Muscat received the award given to those who resist financial, political, economic or religious pressure for her work on The Shift.

In Malta “most media outlets are subservient to the government,” Reporters Without Borders said in a statement. The organisation also noted how Muscat had exposed many cases of corruption implicating local politicians.

Following the announcement of her win, tweets of congratulations and solidarity came in from all over the world.

Bastian Obermayer, on of the two journalists from Süddeutsche Zeitung that led the Panama Papers investigation with the International Consortium of Investigative Journalists (ICIJ) also expressed his support for Muscat’s work, calling her achievement “well earned.”

The Scottish branch of PEN International said Muscat’s work was “a vital, necessary, and committed voice for accountability, justice and democracy when it is needed most in Malta”. Other media freedom organisations including the European Centre for Press and Media Freedom, PEN Deutschland, and media.eu a part of the European Commission, also tweeted their congratulations.

Tribute was also paid by the Global Investigative Journalism Network who commented on Muscat’s and other winners “commitment to journalism that transcends borders”.

Edward Snowden relayed a message to the audience at the Reporters Without Borders award ceremony via his lawyer, as the whistleblower was forced to seek asylum in Russia after leaking highly classified information from the US National Security Agency in 2013.

“I want to congratulate you for your very important work in these dangerous times for journalists all over the world,” Snowden said. “The recent murder of journalists in Slovakia and Malta as well as the espionage charges against Wikileaks editor Julian Assange for publishing truthful information shows all too clearly that repression of the free press is no longer confined to distant dictators.”

Prior to Thursday’s award ceremony, Muscat met German MP Frank Schwabe, speaker of the Social Democrats for human rights issues, at the Bundestag in Berlin where they discussed the alarming state of press freedom in Malta.

In her acceptance speech, Muscat dedicated the award to assassinated investigative journalist Daphne Caruana Galizia and her family.

“We don’t need to be heroes. The fact that some of us are being recognized as such says more about the countries we work in than it does about us. We are all made more vulnerable when justice is out of reach and impunity strengthens the hand of the corrupt.”

Spinning away an award