The developers involved in the Planning Authority-approved monstrosity of a five-storey apartment block engulfing a historic chapel in the hamlet of Manikata are the same as those who tried a few years ago to do the same to two historic landmark townhouses on Rabat’s Saqqajja Hill.

The project, which at the time had also made the headlines, ground to a halt after an eruption of public outrage.

Back in 2018, businessman Keith Grima, who owns part of the Posh Turkish chain, and Justin Spiteri, an architect turned developer, had filed an application that would have seen elegant townhouses dating back to the late 19th century turned into a boutique hotel.

With Grima fronting the application and Spiteri as its architect, they had applied to the PA to transform two Victorian-era townhouses and another two at the back, abutting the road leading to St Augustine’s Priory, into a luxury boutique hotel with 30 rooms.

The proposal had included the addition of two storeys overlooking Rabat’s iconic Saqqajja Square and four storeys on the avenue’s side, destroying the aesthetics of the town’s entrance.

In their attempts to convince the PA, Grima and Spiteri had also hired the services of former Labour Minister Manuel Mallia, who had even attended meetings with the PA to “try to find a solution” to make the application more acceptable.

Ironically, the Superintendence of Cultural Heritage had already made a massive U-turn by dropping its original objections to the project, instead giving it the green light after the developers scaled down the boutique hotel’s plans from 50 to 30 rooms.

However, following some 3,000 objections to the project, which was termed a “non-starter” by NGOs, the developers withdrew their application in the face of public controversy.

At the time, Keith Grima had refused to state the reason for the application’s withdrawal and instead had the two historic townhouses up for sale with a seven-figure price tag.

In order for the same attempt to not be rehashed, the area’s residents had requested and obtained scheduling for the whole area.

Following the latest public outrage over the Manikata development, ironically given the name of ‘Ville Chapelle’ after the adjoining 1920’s chapel, the aesthetics of which were destroyed by the development, The Shift discovered that the architect who moved the project through the PA channels is also an investor in the project. 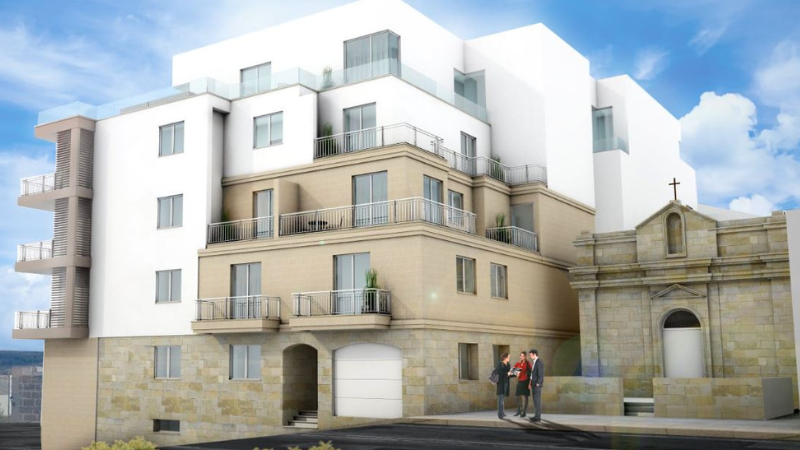 Concept art displaying the development next to Manikata’s church

Justin Spiteri, warranted in 2008 and still in his 30s, has a 50 per cent shareholding in Juke Development – the controversial project’s owner – with the other half being held by Keith Grima.

Spiteri is also involved in other business ventures with Grima, all related to development, despite established yet unwritten ethical rules to the effect that an architect should never be involved with his client, let alone invest with him in speculative property developments.

The Shift is informed that the pair have been in business together for many years, mainly in the practice of demolishing old buildings all over the country and turning them into apartment blocks.

Apart from various property development companies and the Turkish kebab business, Grima is also a shareholder in Ventur Auto Imports of Mosta.

Everyone involved in the construction sector, and when I say veryone, it is everyone!!

Just like China – construction is the ‘safest’ place to put your money. China is full of uninhabited and way-substandard apartment blocks. It’s what their paper economy survives on. Everything is fake – everywhere.

Malta will soon implode economically, environmentally and demographically.
This is a wake up call for all youngsters dreaming of a career, and a quality of life, to start looking beyond our shores.

Good to be friends with these buddies as though they are at a low profile they manage to get what others cannot.

The last time I saw something similar happen was in a film some forty years ago. Reminicent of the old lady defending the destruction of her home by developers building towers.
History has this bad habit of repeating and the Maltese have an even worse MEPA planning.
It was not that long that this massacre started destroying the environment.
In these Modern Times i just wonder what sort of homes do these developers inhabit. Is it one of those matchboxes into which human matched sticks and off spring walk to live in?

Where are the SCH?

Disinformation watch: Populist statements that do not address the real issues