The Shift takes a look at Dubai Holding, the UAE real estate giant with a majority shareholding in Smart City (Malta) Ltd

Smart City Malta isn’t the only project masterminded by Dubai Holding, a subsidiary company of the UAE crown’s real estate arm, that has departed from its original terms, according to research conducted by The Shift following the Maltese government’s recent decision to change the parameters of the deal.

Similar projects in India and Morocco have also suffered the same fate – incomplete, then turned into residential projects yielding more personal profits instead of the investment in the economy and the creation of jobs promised.

The new terms of the deal for Smart City Malta ratified by the Labour government mean the three wealthy businessmen have been granted a much freer rein over what happens with the massive tract of land they purchased in Kalkara in 2007.

In 2007, the Maltese government first signed the deal which was supposed to lead to the creation of an ICT city, a project backed by a €300 million investment that was supposed to create 5,600 jobs, which never materialised.

From Kalkara to Kakkanad

That same year, Dubai Holding announced an almost identical Smart City pitch for an area in India known as Kakkanad.

Smart City Kochi, as the project is known, bears striking similarities with the one in Malta, albeit on a larger scale – in 10 years, the project was supposed to convert over 800,000sqm of land into an ICT city, creating 90,000 jobs in the process.

In 2020, the New Indian Express published an article describing how a state government representative sitting on Smart City Kochi’s board had allegedly attempted to sell off over 120,000sqm of land meant for IT development as residential real estate instead.

The attempt to sell off this land mirrors what happened in Malta with the Shoreline residential development – even though the original agreement stipulated specific parameters for ICT-related development.

Two years later, the same news portal published another article comparing Smart City Kochi with an IT hub located across the street known as Infopark, with the portal describing the promised Smart City hub as a project that “failed to live up to all the initial hype even 11 years after its launch”.

An analysis of the concept art originally showcased for Smart City Kochi compared to satellite imagery of the area on Google Maps shows that while some of the proposed projects are under construction, ten years later, the project is far from what was advertised as the end stage of the project. The conceptualisation of the Smart City Kochi project. 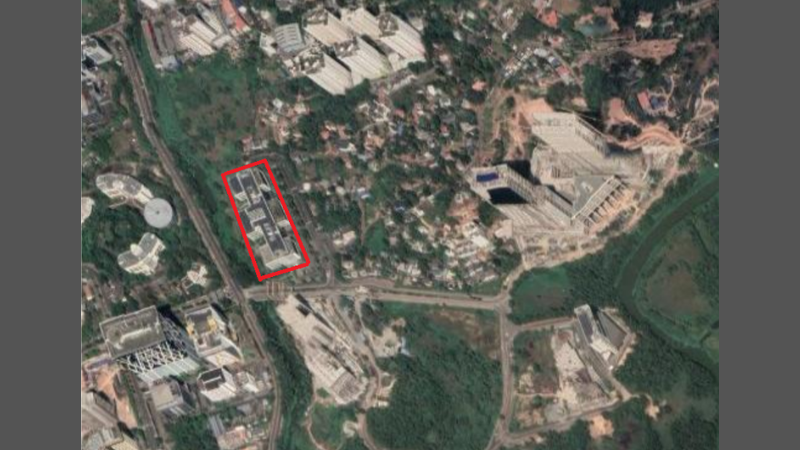 A Google maps view of the region in which the Kochi project was supposed to be built (the box in red marks the location of Infopark).

Al Malik’s biography on Dubai Holding’s website states that the managing director “is also responsible for the company’s international real estate investments in places such as Malta, Kochi and Morocco as well as managing its strategic relations with local and international investors, and its government affairs”.

The Shift’s research indicates that Dubai Holding had, in 2005, announced a $2 billion project in an area known as Bouregreg, nestled between the cities of Rabat and Salé in Morocco.

Similar to the project in Kakkanad and Kalkara, the ambitious plans announced initially by the then-king of Morocco, Mohammed VI, do not match what is seen in Bouregreg today. A conceptualisation of the urban development between Rabat and Salé. A Google maps screenshot showing the same area between Rabat and Salé as it currently stands.

The only visible structure in the area is the Grand Théâtre de Rabat, the construction of which was completed last year, two years past its deadline.

Pro business my foot, it is more attracting pro sharks, that promise Heaven on earth and deliver nothing.
Malta should not be just pro business but pro productive investment, both local and foreign.
Solid investment creates not only well paid jobs, but should promote careers for all, irrespective of political colour.
Provided that these careers are for people who excel in their particular field.
Certainly NO to cheap labour, which is tantamount to human trafficking, in my books.

Another laudable Shift article; well done! Not to minimize the local impact, but the real ‘marks’ in these grifts were most probably the suckers who were liberated of their money on the strength of fairy tales, likely packaged as part of a larger investment scam (what’s a few million here and there when you’re dealing in billions…). Which is not to say that the Castille gang didn’t understand and embrace their involvement in the grif, just like the brazen sale of Schengen access and all the other heists they pulled.

The original name given to the project was Smart City at Malta, or SCAM for short. I had foreseen back then that this was a scam. It’s now confirmed. It’s just another excuse for real estate speculation.

SMART CITY !! it’s a joke, at no point has anyone taken into consideration the amount of traffic that has no option but to leave 3 Cities by 1 road, an extra 430 cars if only one car per apartment, which we all know isn’t going to happen. Let alone the biggest shopping centre, go away, we don’t need it nor do we want it. There’s enough traffic without adding more.

AS USUAL WITH THIS CORRUPT LABOUR GOVERNMENT. THEY SELL OUR LAND FOR PEANUTS AND THE BUYERS MAKE A KILLING ON PROFITS.

THEY GAIN, WE TAXPAYERS LOSE AND COMMISSIONS PAID!!!👎👎👎