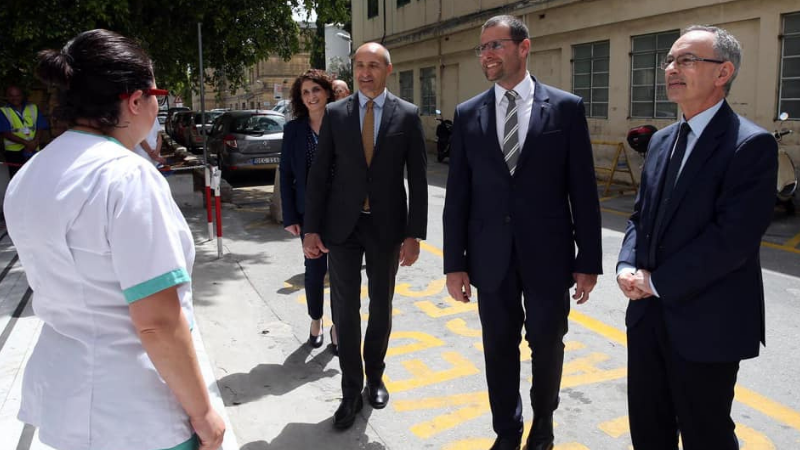 The glossy, parquet finishing in the reception area of Karin Grech hospital gives visitors the impression that the hospital is modern, sleek and well-furnished, an initial impression that could not be further from the truth that becomes apparent the minute you enter patient wards.

The rest of the hospital leaves a lot to be desired, with multiple sources sending pictures to The Shift to substantiate their complaints. All the pictures exhibited in this article were taken in the last two months.

“Karin Grech hospital has serious issues. I remember visiting the hospital 20 years ago and it hasn’t changed at all. The only thing they have done up is the reception area. As soon as you pass the reception area, you’re back in the 80s,” one source said.

Confirming the state of affairs, multiple sources sent in pictures of dilapidated rooms with decaying paint jobs, faulty doors, lighting features and windows caked with months’ worth of dirt. All the pictures were taken in the hospital’s rehabilitation wards.

Crucial emergency medical equipment, including catheters, oxygen masks and nebulisers, was stored in shopping bags hanging off hooks in each patient’s room.

One corridor was even accompanied by a notice warning visitors and patients not to open a particular window because of a “hornet invasion” on the premises.

“And you know what the worst thing about it is? It’s human nature: you quickly get used to it, and this is what I think the problem is, that one can so quickly get used to it in the same way one gets used to a messy desk or a dent in your car,” said the relative of a patient receiving care in the hospital. “If you see it all the time, you get used to it; you’re only shocked for the first couple of times.”

Karin Grech hospital is one of the three hospitals under the management of Steward Healthcare, which took over the controversial concession mired in corruption allegations that was originally signed with Vitals Global Healthcare (VGH) in 2015.

In return for the contract to manage and operate Karin Grech, St Luke’s and Gozo hospitals, the concessionaire was supposed to invest €200 million in the refurbishment and modernisation of all three hospitals, which never materialised.

Steward Healthcare took over the concession only to later declare the agreement “fraudulent and corrupt” while failing to meet its obligations.

In November 2021, Opposition MP Adrian Delia openly berated the concessionaires following their failure to present evidence in court to prove they had honoured their end of the bargain. He had already filed a court case when he was Opposition Leader to take back the public hospitals.

While the government has made a whole exercise out of appearing that it is going to force Steward Healthcare to honour its obligations, the fact is that seven years after the original concession was signed, the hospitals remain in the same rundown conditions they were in beforehand, with the only main difference being the opening of Barts Medical School adjacent to the Gozo hospital.

Other sources who contacted The Shift about the hospital on the sister island under the management of Steward Healthcare pointed out that while there was an aesthetic facelift in some parts of the interior of the hospital, much of it also remains the same as it was decades ago.

Expressing shock, one source described the room their relative was being kept in as “rudimentary”, outlining how they believed their elderly relative deserved better than the conditions in which the patient was kept for treatment.

St Luke’s Hospital does not fare much better, with Steward Healthcare again failing to make the promised investment. In 2019, Steward Healthcare had spoken of plans to refurbish the hospital entirely, submitting a development application the following year only to later withdraw it with no explanation.

Questions sent to Steward Healthcare were not answered by the time of publication.

Nothing has changed in thirty years. It looks very much the same. Actually there might be some ‘precious’ metals missing!

The only ones who benefited where the CROOKS led by the most corrupt pm Malta ever had. GREED AND CORRUPTION LEADING TO POWER LIKE OTHER TOTALITARIAN COMUNIST STATES.

There is a disconnect.
Between the mafia and everything they fear.

Why has the government not done an audit on the group to see where all the money has gone or is going. Why has a company of this size not presented a fully documented account of it’s plans for all the locations it is responsible for. NO ACCOUNTABILITY.

SINCE THIS INCOMPETENT LABOUR GOVERNMENT TOOK OVER. THE CORRUPTION HAS NOW GONE MUCH FURTHER, WITH MILLIONS OF EUROS SPENT, COMMISSIONS MADE AND TAXPAYERS MONEY WASTED ON THIN AIR!!!