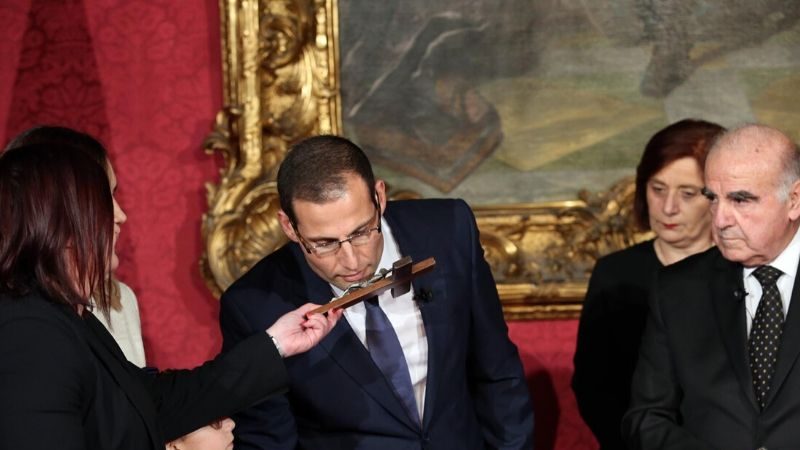 International NGO Reporters Without Borders has called on Prime Minister Robert Abela to start his new appointment by taking a stance in favour of justice and ending impunity.

In a tweet, RSF wrote that it expected the new prime minister to “change course and work to enhance the country’s democratic credentials, starting with an end to impunity”.

It pointed out that former prime minister Joseph Muscat’s time “at the helm of government was marked by a war on press freedom in the country that saw the assassination of a journalist Daphne Caruana Galizia under his watch”.

@RSF_inter expects the new Prime Minister @robertabela_mt to change course and work to enhance the country’s democratic credentials, starting with an end to impunity.

Meanwhile, in a congratulatory letter to Abela, President of the European Union Commission Ursula von der Leyen did not make any mention of Malta’s rule of law concerns.

“I am convinced that the Maltese Government, under your leadership, will continue to make a constructive contribution to a stronger, more united and more just Europe. Guided by our shared European values, I am confident that together we can address common challenges. I trust in your commitment to the European project in which Malta plays such an important role and look forward to our future cooperation,” Von der Leyen said in her letter.

Congratulations @robertabela_mt on your appointment as Prime Minister of #Malta.
I am convinced that the Maltese Government, under your leadership, will continue to make a constructive contribution to a stronger, more united & more just Europe. pic.twitter.com/ZgPG1bxsVO

Last month, a resolution adopted by the European Parliament called on the EU Commission to make multiple moves on Malta, including starting a “dialogue with the Maltese government in the context of the Rule of Law Framework without further undue delay”.  Another is to implement a monitoring mechanism which was conceived and voted upon by the European Parliament in 2016 under the acronym of DRF – which stands for Democracy, Rule of Law and Fundamental Values – the idea of which is to create a watchdog to assess Member States on these criteria.

Despite this, the new EU Commission president makes no mention of the EU’s concerns with Malta’s rule of law in her first letter to the new prime minister.

“I wish you every success during your term of office and hope to meet you soon,” the letter concluded.

However, rule of law was something that was mentioned by financial and economic policy spokesperson of the Greens/EFA group MEP Sven Giegold, who said that the Commission should “immediately start the dialogue with the new Maltese leadership in the context of the rule of law procedure.”

“Europe can no longer ignore the culture of impunity for money laundering and corruption. The EU Commission must initiate an Article 7 procedure if no progress is made by the Maltese government”.

He said that a restart for Malta “will only be possible if (Abela) clearly distances himself from the old system of corruption and clientelism”.

“Abela deserves a chance, but skepticism is appropriate. He was a legal advisor to former Prime Minister Muscat and thus part of the old system. Malta must finally comply with European rules when it comes to anti-money laundering, the independence of the judiciary and banking supervision. Corruption and clientelism in public procurement and in planning procedures in the construction industry must be consistently prosecuted,” he said.

“The new government must tackle all the problems that led to the murder of Daphne Caruana Galizia. To this end, the Maltese Government must fully implement the recommendations of the Council of Europe’s Venice Commission,” he said.

Geigold formed part of a delegation of MEPs from the European Parliament Committee on Civil Liberties, Justice and Home Affairs that was sent to Malta last month for the third time in two years on a fact-finding mission amidst political turmoil in the country. Led by Dutch MEP Sophie in’t Veld, the delegation had left Malta saying they had “serious concerns”.

The importance of rule of law was also highlighted by the European Centre for Press and Media Freedom, which picked up a tweet by Council of Europe Special Rapportuer and Dutch MEP Pieter Omtzigt (Netherlands, EPP/CD)

In a statement, Omtzigt congratulated Abela on becoming prime minister and pointed out that, with a new government, there was hope to end the damaging recent tensions and for Malta to start to rebuilding its reputation abroad.

“The international community is profoundly concerned by Malta’s systemic and structural rule of law deficiencies. Institutions from the Parliamentary Assembly of the Council of Europe to the European Parliament and European Commission are calling for European standards to be upheld, as a matter of acute urgency,” Omtzigt said.

He said he looked forward to meeting Abela to discuss his intentions about the implementations of a number of reforms and hoped to hear “how his government will ensure justice for the assassination of Daphne Caruana Galizia and end impunity for high-level corruption.”

Civil society group Repubblika also wrote a letter to Abela, listing “what (they) are expecting from our Government and from public life in our country,” such as having “the courage to clean up public administration from corruption and abuse of power”.

“We felt very disappointed when, on the very first day of your taking up your new post, we saw officials suspected of involvement in serious corruption in your office,” they wrote. They also told Abela that they “want to see (him) exclude from (his) cabinet whoever is suspected of corruption or of unethical behaviour,” and an investigation into Electrogas and Vitals.