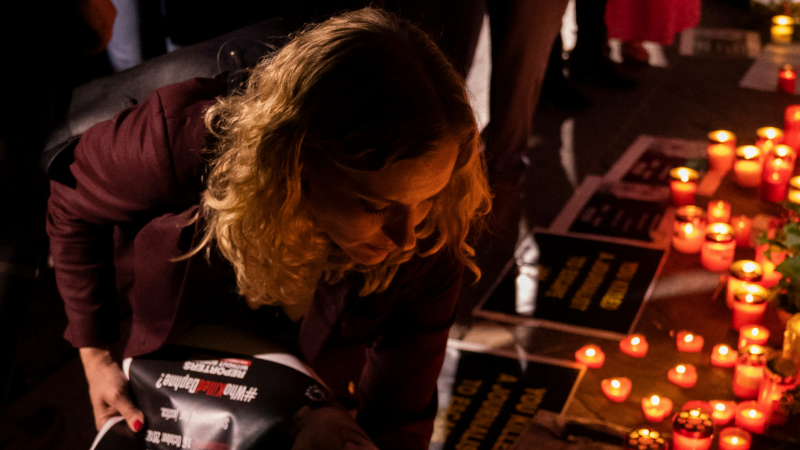 Joseph Muscat’s behaviour in court on Thursday, during the libel case he insists on pursuing against a journalist assassinated under his watch, amounted to blackmail of Daphne Caruana Galizia’s family and further proof to all the international bodies watching Malta that its bad name does not need local agents to propagate.

Muscat personified all that is wrong in this country in one hearing, and he needed no help to revive the barrage of criticism hitting the country since he’s been at the helm, in a constant vortex of scandals hitting him at the core.

Muscat said he was willing to drop the libel cases he had instituted against the murdered journalist if her heirs admitted that she was wrong on Egrant – the third Panama company exposed in an unprecedented leak of 11.5 million files from the database of the world’s fourth biggest offshore law firm, Mossack Fonseca.

Since they were exposed in 2016, the firm has closed down, Prime Ministers and other politically exposed persons (PEPs) and tax dodgers have been charged and their enablers prosecuted. But EU Member State Malta has survived beyond the realms of belief.

Now put yourself in Muscat’s shoes and ask yourself: if you were innocent, would this be your course of action? If you had the powers of the State at your command, wouldn’t you pull all the stops to a comprehensive public inquiry including any international body that is interested, to get this over and done with and clear your name?

If you were truly satisfied with the “unambiguous conclusions” of the inquiry, the full text of which you won’t share, would you really need the heirs of a murdered journalist to “accept” those conclusions?

Muscat chose to blackmail the family of the dead journalist to get their consent that he has nothing to do with Egrant.

Again, if you had the tools of the State at your disposal to prove your innocence, is this what you would do? If the conclusions were really that clear and certain, what could the heirs’ “acceptance” possibly add?

Muscat was quoting from the “conclusions of the inquiry” – the only one, as well as those defending him, to have a copy of it.

Muscat, as the subject of an inquiry into his actions, is the only one to know what everyone said about him and the crooks around him.

The government’s (not Muscat’s) Head of Communications proceeded to inform the world that the Prime Minister was “breaking down libellous sentence after sentence”.

So bold! Beating sentences to death when the one who wrote them can’t defend them because she’s buried as a result of the dirt she exposed.

And he (and those around him) are the only ones who know what the dead journalist (as well as everyone else called in) told the inquiring magistrate.

Muscat quoted lines from the inquiry – selectively pulling out statements that benefit his interest and in a context that only he is aware of. When he refers to a particular assertion, we have no idea if there’s a line that follows that says it’s absolute bollocks, or another line that says there may be other possible explanations or conclusions.

The fact of the matter is that, despite all his bravado, bullying and crocodile tears, Muscat clearly feels that the conclusions of the inquiry are not as conclusive as he may wish.

Muscat is speaking to the herd, and he has enough media muscle thanks to the Party’s media channels and the ever-obliging State broadcaster, to spin his own truths. But it does not mean that everyone is fooled.

When he explored new lows yesterday in court, those principles he sought to undermine were not Malta’s to dismiss. They are universal, and they will be defended as such.

Reporters Without Borders said: “We may not yet know who ordered the hit on #DaphneCaruanaGalizia, but there are some at the very highest levels of government in #Malta who clearly benefit from her inability to continue reporting on them.”

We may not yet know who ordered the hit on #DaphneCaruanaGalizia, but there are some at the very highest levels of government in #Malta who clearly benefit from her inability to continue reporting on them. https://t.co/DxVWFPM36W

The international press freedom organisation said Muscat was trying to justify his pursuit of a vexatious posthumous defamation suit against a journalist over 15 months after her assassination.

“Meanwhile, we are still waiting for #JusticeforDaphne,” Reporters Without Borders said.

Muscat, laying into the family on a libel case against an assassination he refuses to have properly investigated, needs no help with the rest of the world seeing him as a tin pot dictator.

The response by the Caruana Galizia family was the natural response in any functioning democracy:

We will not concede to extortion by our public servants”

“My mother denounced the PM of Malta, Joseph Muscat, and was executed with a car bomb months later (he denies any connection). Now he asks us to denounce her work and in return he’ll drop his libel suit against her (a dead person). This is our reply: We will not concede to extortion by our public servants,” Daphne’s son, Matthew Caruana Galizia, said.

He was the one to reach his mother in flames when the car bomb went off, killing her. But there was nothing of her left to save. It is through this pain that he, as well as the rest of the family, still has to counter the bullying by Malta’s Prime Minister.

“Joseph Muscat, the Prime Minister of Malta, is still pursuing a libel case against my dead mother… who was assassinated in front of me over a year ago. This is what we are dealing with. In the European Union. In 2019,” Matthew said.

Muscat and his crew never got this concept – that they are there to serve. Their idea of service is handing out leftovers to loyalists and other crumbs to different sectors. Their strategy has nothing to do with equity or justice, but all about maintaining power.

And that goal has now become a matter of life and death, because there is no way Muscat and those around him would be walking free, let alone talking about jobs in Europe, if the institutions in the country that should put them behind bars were no longer under their control.