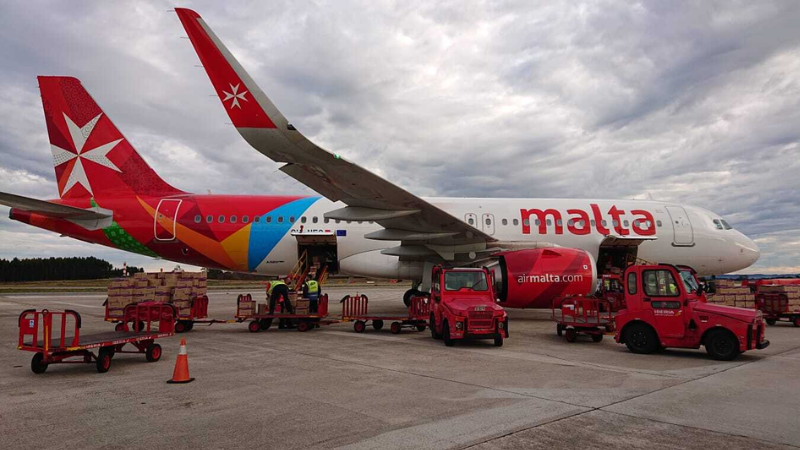 ‘All the minister had to say to us was: The decision has been taken, you can take it to court,’ one of the disgruntled employees told The Shift

Air Malta’s part-time ground handling employees have been left completely in the dark about their employment status, having received no communication whatsoever from the airline about either their next shifts or their redundancies.

Adding insult to injury, the in-limbo employees speaking to The Shift said that when they decided to take matters into their own hands and went to confront Finance Minister Clyde Caruana about the state of affairs, he simply told them the decision has been taken and that they can take it to court if they like.

The Air Malta employees, or former employees – they still do not know which category they fall into – say they have not had any contact from anyone, not even the General Workers Union. When they finally went knocking on the union’s doors for some answers, they were simply told to start over from scratch with the new company.

That new company, however, is unlikely to take them on. The Shift has reported that the new ground handling operator will start with only the sparse workload left behind by Air Malta, which, apart from its own planes, was servicing only Turkish Airlines and ITA, Alitalia’s successor.

Last May, The Shift revealed the government’s plans to farm out all of the national airline’s ground handling operations to an Italian company, shedding some 600 Air Malta employees in the process.

Additionally, until a few years ago Air Malta ground handlers serviced several other airlines operating in Malta, but the airline lost all of its most profitable contracts due to mismanagement.

One Air Malta employee who has been working in the ground handling department for eight years said, “We have received neither an email nor a phone call informing us about our situation. The shifts just suddenly stopped and we have been left completely in the dark.

“There has not even been an email to thank us for all our years of service to the company.”

A group of the part-time ground handling employees eventually sought legal advice, which was, as a first step, to wait outside the finance ministry to confront Minister Clyde Caruana, who is responsible for the national airline’s painful restructuring process.

Some of them took a day’s leave from their full-time jobs to do so and although they said reception initially tried to brush them off by telling them the minister was not there, they caught sight of him and he agreed to an exchange.

‘The decision has been taken, you can go to court,’ says finance minister

“All he had to say to us was one sentence: ‘The decision has been taken, you can go to court or to the Ombudsman’,” one of the disgruntled employees told The Shift.

Most of the group have other full-time jobs and have been working part-time at Air Malta for years to supplement their income.

“This means around €10,000 a year for me and they are acting as though it is nothing. We are all very worried. We work full-time and part-time at ground handling as well because we need the money, it is not a hobby,” another employee told The Shift.

She added, “I, for one, have been using the salary from Air Malta to pay off my home loan. I depend on it and now I don’t know how I will be able to continue paying the mortgage.”

In the meantime, some full-time ground handling employees, those who have been with the company for over 30 years, were given extraordinary golden handshakes of over €200,000 each.

The minister, however, has not made any statements, either publicly or even to the employees themselves for that matter, about how the company has decided to offload this part of its operations to its new Italian partners.

Caruana has already made a number of blunders in the ongoing restructuring plan – notably by first promising the airline’s redundant employees a guaranteed job in the public service, and later, after the election, ditching the pledge and instead offering them golden handshakes.

In the meantime, Air Malta has also spent some €4 million on consultancies over the last few years despite the airline’s dire financial situation, as reported on Monday by The Shift.

Among the most lucrative consultancies awarded by the airline on Finance Minister Clyde Caruana’s watch is a €2.4 million direct order this year to Knighthood Global Ltd, whose Maltese representative is Centrecom, a company co-owned by Maltese-Australian Leslie Cassar.

The finance minister confirmed the direct order in Parliament but did not specify the service the company is providing over the course of its one-year contract.

Caruana also failed to explain to Parliament why local audit firm Ernst & Young is being paid another €404,000 for consultancy. The only information available is that “the (unspecified) project is in progress”.

The same auditing firm is a regular recipient of direct orders from public coffers, receiving another four direct orders from Air Malta in the last three years, costing an additional €200,000 in fees. Among the bountiful direct orders, RSM Ltd was also given a €100,000 consultancy.

Ground Handling have had it good for the past 40 years.
I remember when EVERY airline was forced to use Air Malta ground handling if they wanted to fly into Malta.
Before we joined the EU there was no choice.

The Airline is bankrupt full stop.
The government is wasting vital tax payers money instead of investing it.

The government should sue the unions and the union representatives who were greedy enough to negotiate the packages.

The citizens want their money back. Excess golden handshake payments should be paid back to the government.