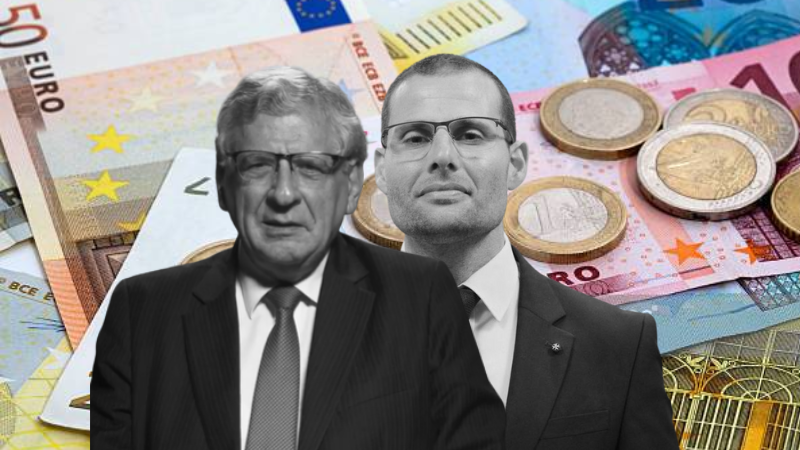 A 72-year-old former minister who made his name in the Labour Party ranks during the 1980s as Dom Mintoff’s foreign minister is still on a state salary even though he has been out of the game for more than 40 years and is already on a hefty extra pension reserved for former cabinet members.

Alex Sceberras Trigona served as ‘Special Envoy’ to disgraced former prime minister Joseph Muscat, who had put him on the gravy train soon after he took power in 2013 as thanks for supporting his Labour leadership bid. And Prime Minister Robert Abela has given orders to keep the former minister on the public payroll.

Through the ad hoc contract, Sceberras Trigona was appointed Thematic Ambassador for the World Trade Organisation against payment of €18,200 a year.

According to his contract, seen by The Shift following a Freedom of Information request, the 72-year-old former minister, who made a name for himself by signing a secret treaty with North Korea in 1982, is expected to ‘work’ at least 10 hours a week and charge taxpayers at the rate of €35 per hour.

In addition to keeping Ian Borg briefed on the agenda of the WTO meetings in Geneva, he is also expected to send the minister a monthly report on “matters of particular interest to Malta”.

Senior diplomats told The Shift that apart from being “a complete waste of money”, the government is also “discriminating against other ambassadors”.

“Normally, non-resident ambassadors are paid an honorarium of not more than €5,000 a year in exchange for acting as diplomats with other countries in which we have little or no interest,” a senior diplomat explained.

“Sceberras Trigona is privileged as he is being paid more than three times as much, despite having little or no work to do. It’s just a complete waste of money and a slap in the face for the other non-resident ambassadors, even though most of them are also political appointees,” he said.

Before Sceberras Trigona was given the job, affairs related to the WTO had fallen under the brief of the consulate in Geneva, where Malta has a full-time permanent representative and staff, which come at a significant expense.

However, this brief has now been ‘hived off’ from Ambassador Christopher Grima, a career diplomat, and given to the 72-year-old former minister.

Apart from his foreign ministry contract, Sceberras Trigona, having been a cabinet member for just five years in the 80s also receives a pension reserved exclusively for such former politicians, paid over and above their national insurance pension.

The cabinet pension is over €32,000 a year, while a maximum regular pension in Malta is capped at less than half that. The vast majority of pensioners in Malta receive less than €800 a month after a lifetime of NI contributions.

Sceberras Trigona joins another minister in the 80s, Joe Debono Grech, who is also receiving significant pension payouts at the age of 83. Apart from his €32,000 annual pension, Debono Grech is also receiving a €40,000 bonus through his contract as a Special Delegate to the Prime Minister.

No one knows what Debono Grech’s job is or when he carries out his duties, whatever they may be. But he did turn up for a political rally for Gozo Minister Clint Camilleri in the lead-up to the general elections in March, in which he reminded Labour Party supporters: “People say that all (politicians) are corrupt. And they’re right. But we got nothing out of their (PN) corruption. At least we (PL) gained something out of ours.”

What a waste of taxpayers’ funds. These perks should be abolished and used purely for social purposes.
Alas the Partit tal-Haddiema is no more.
What a shame.

Another Phantom job for the court.

This country is in shatters. Honestly, I have never been so sad and never imagined to pass such a bad moment in my life, where I am literally disgusted with the state of affairs of my homeland. Crooks are everywhere and the wave of bad governance seems to be infinite. The political class has never been so cheap. The cost to live a decent life here has never been so ridiculously high, and the environment continues to degenerate by the minute. Unprecedented levels of traffic on our roads and lack of discipline. Construction galore, committing havoc on our roads. An Overcrowded place due to lack of proper planning. Insomma, Quality of Life which has gone to the dogs. Unbelievable but true!

Clyde Caruana wake up and clean the shit that is around your legs.

You will find quite a few recoverable millions floating, here and there. Two ‘sangi sugi’ are mentioned in this article so, you have been given it on a plate and you can start from there.

A DISGRACEFUL PL GOVERNMENT DOING WHAT IT PLEASES
BECAUSE THE MALTESE IĠĦNA WERE SO STUPID THAT THEY
GAVE HIM A CARTE BLANCHE.
NEVER, EVER, TRUST THE PL GOVERNMENT,
IT WILL ALWAYS, UNFAILINGLY, DECEIVE YOU.