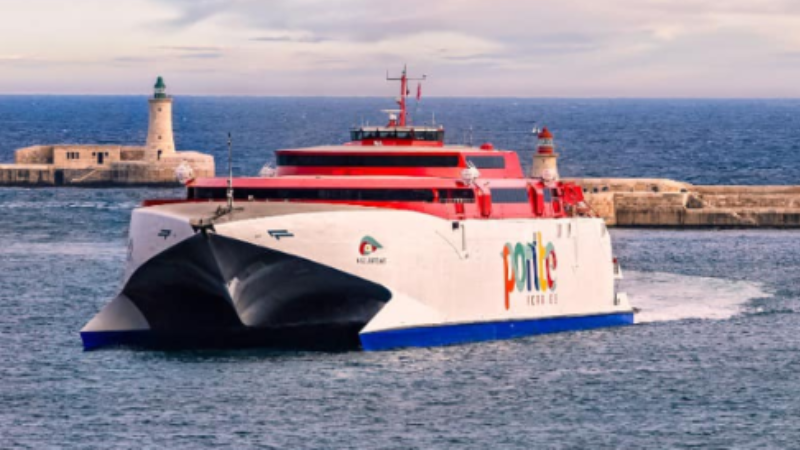 Passengers left stranded as Ponte cancels trip with them already aboard

Hundreds of passengers were left stranded on Independence Day when Ponte Ferries – the new Malta-Sicily catamaran operator – cancelled its scheduled services with passengers already having boarded the vessel.

Passengers who were left stranded last Wednesday, either in Valletta or Augusta, told The Shift that the company owned by part of the Zammit Tabona family (owned by Michael and Julian Zammit Tabona) of the Fortina Group and Gozitan tomato products producer, the Magro Group, was “embarrassing the country with a Third World service”.

Passengers told The Shift how, after queuing with their vehicles from 3am to board the 5am scheduled departure from Valletta, they were told through an onboard announcement that the vessel was to depart late “due to technical problems”.

“They left everyone onboard, and at 6am they made another announcement that the voyage was cancelled,” an angry passenger told The Shift.

Passengers also complained that the vessel’s staff treated them with disrespect whenever they tried to ask what was happening.

A number of disgruntled passengers took to social media to vent their frustrations about the service, or lack thereof, with many recounting similar experiences over recent weeks. Contacted for a reaction, Ponte Ferries CEO Edward Zammit Tabona refused to give any details.

Passengers told The Shift that the vessel resumed its scheduled service yesterday but noticed the ship was taking longer to make the crossing, apparently because of a defective engine.

Ponte is plying its daily service with the HSC Artemis, which is over 20 years old.

This latest trip cancellation is one in a series of incidents characterising Ponte’s bumpy ride in attempting to compete with its arch-rival Virtu Ferries, which has been operating the shorter route to Pozzallo for the past 30 years.

Many had welcomed the advent of competition in high-speed crossings to Sicily as travellers had long complained about the high prices charged by Virtu, thanks to what was effectively a monopoly.

However, the initial enthusiasm soon turned into frustration as Ponte’s service began experiencing regular problems, including a false start last year with many having dashed their holiday plans after the service failed to commence on the targeted date.

Other incidents included the vessel’s seizure by the Italian authorities due to a lack of compliance with international regulations. It is not yet established whether Ponte will continue to offer the daily service in winter.

So far passengers are not allowed to book next month.  When asked, Ponte refused to divulge any information.

Substitute ‘passengers’ with ‘livestock’ for more insight into their business model.
(This very same business model is being put into action by the government over the planned abolition of local councils.)

Ponte’s prices are no different to Virtu but trip takes twice as long…..nuff said!

I hope the this Mafia government will NOT be subsidising the zmmit tabonas from our taxes.

The only reason they started this service is to be able to say they have Ferry experience the next time the (profitable) tender for a fast ferry from Gozo to Valletta comes up, which will allow the government to give the deal to them instead of to Virtu as they tried but were unable to do the last time.

Some sort of ‘ferry experience’ indeed!

Some people had better stick to their generations-long enterprises, like producing tomato paste or serving cheap ‘buffet lunches with free-flowing wine’ on trips to a quiet, peaceful and scarcely-visited haven called Comino

This article is overly bashing a ferry company for a technical problem whereas they could use a bit of sympathy I think. We used them a few months ago and had a very good experience. Friendly service, clean and modern vessel and a good price. Yes a longer trip than Virtu but they bring you close to Catania. I booked them once I saw that Virtu tried all legal means to block competition, really bullying them. Why not have a bit of sympathy for the underdog.

Exactly. These people didn’t follow how many flights easyJet cancelled at last moment in the Uk. One cancellation and the service is condemned. Well, I will never travel with Virtu. Their treatment of pets is pitiful. Sentencing them to a box for at least a 3hour timeframe is cruelty. So bye bye to Sicily trips if only Virtu prevails.

I agree. I had a nice experience with Ponte beginning of August. All was neat and went smooth. I don’t get the bashing.

Even we had plans and were on board they had a technical problem we lost a day to. They were so kind we had a full refund cash
back.
These things happen even with virtu ferry a few years ago we took 7 hr to arrive from catania to malta.

We had a ferry booked for malta this evening (Saturday) but are left here in Sicily as the ferry is not working again. Virtu Ferries is fully booked until Monday so we had to extend our stay here.

I was supposed to make a round trip on the 23rd (friday), in the evening I received a message that the ferry will not work. Without hesitation I booked a ticket for the 24th (Saturday). I received another message that it have been cancelled and that it’ll work on the 25th (Sunday). I phoned Ponte ferries Augusta as we where stranded in sicily, and they told us to cut a ticket with virtu ferries and that they will give us a compensation and full refund of the tickets. Till now we received nothing.

Apart that on the 23rd the ship was due to arrive in Augusta at 8.30am and arrived at 10.45am half day ruined.