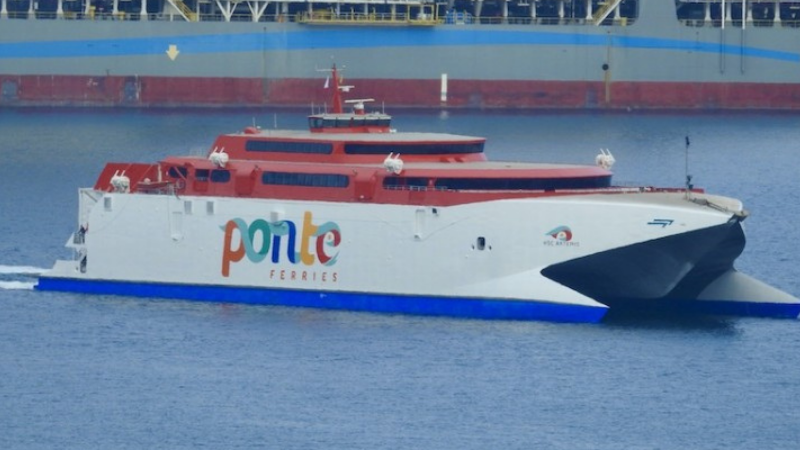 The delay was blamed on the Sicilian ports authorities’ failure to issue the necessary permits in time, but The Shift has found that these were actually made available just a week after the originally planned start date.

In June, Ponte announced the start of much-anticipated competition on the Malta-Sicily ferry crossings, and began selling tickets in advance for its scheduled maiden voyage on 6 August and subsequent daily crossings between the islands.

However, as anticipated by The Shift weeks before, Ponte was forced to cancel the 6 August launch of their service at the eleventh hour because the Italian authorities had not yet issued the required berthing permits, although the Maltese company had already started selling ferry tickets for passengers and their vehicles.

The Shift can now confirm that Ponte was actually given the go-ahead to start operating their daily fast-ferry commute from as early as 11 August – a week after their official announced launch.

However, the new ferry operator still failed to begin its operations, meanwhile claiming that its competitor – Virtu Ferries – had made a last-minute challenge in an attempt to block Ponte’s permit. Virtu has denied this.

Official documents obtained by The Shift show that the Augusta Port authorities, in a move to alleviate the frustration of stranded Ponte clients, issued the nascent company with a permit to start its crossings on 11 August.

Asked yesterday to confirm that Ponte was indeed offered the possibility of starting their service just a week later than announced, the company declined to give a reason why they waited a further three months to officially launch their service.

Ponte Ferries is owned by Fortina Group and Gozo’s Magro Group. Fortina Group CEO Edward Zammit Tabona has failed to reply to questions asking him to confirm that the company was not ready to start operations in August, despite its public announcements to the contrary.

The Shift is informed that Ponte’s ferry – the 20-year-old HSM Artemis – was still not in a technical position to sail in August as more work was needed on the vessel to get it in shape to tackle the daily eight-hour crossings to Augusta and back.

Customers who had their summer holiday plans dashed by Ponte yesterday complained to The Shift that despite being given replacement vouchers for their tickets, they’re still unable to plan when to make use of them.

“So far, Ponte is only taking bookings for a month, until 17 December,” one client said, complaining that his family still can’t book to spend Christmas in Sicily.

The Shift has also attempted to make online bookings for dates after 17 December, but wasn’t able to either.

The start of Ponte’s crossings was welcomed by many frequent visitors to the southern Italian island, anticipating more competition on a service which has been dominated by Virtu Ferries for decades.

Over the past 30 years, there have been many attempts by different companies to enter the Malta-Sicily ferry market, including by Italian maritime giant Grimaldi.

However, most of these were short lived, leaving Virtu Ferries as the only company offering a consistent service on this popular route.

With the entrance of a new player on the market, Maltese and Italian commuters will now be able to travel daily between Malta and Pozzallo through Virtu, and between Malta and Augusta – which is closer to Catania – five times a week with Ponte.

Virtu has already announced that it is also planning to start daily crossings directly to Augusta and Catania, although this is subject to clearance from the respective port authorities, which has still not been issued.

The Shift is informed that a third Maltese company is also planning to start offering catamaran crossings to Sicily in the next few months. However, this is still a work in progress and no announcements have yet been made.

It will be very interesting to find out why over the past 30 years no competitor was allowed to offer the service, come on Shift News Team investigate!!

Pj_Brennan. Can you read ? Who told you or where is it written, that no one else was ALLOWED to operate ?? Read again, and this time understand, that there had been several attempts by others but their service was always short lived.

Service stopped again and ferry is now docked in Messina.

The magic of making the illegal legal