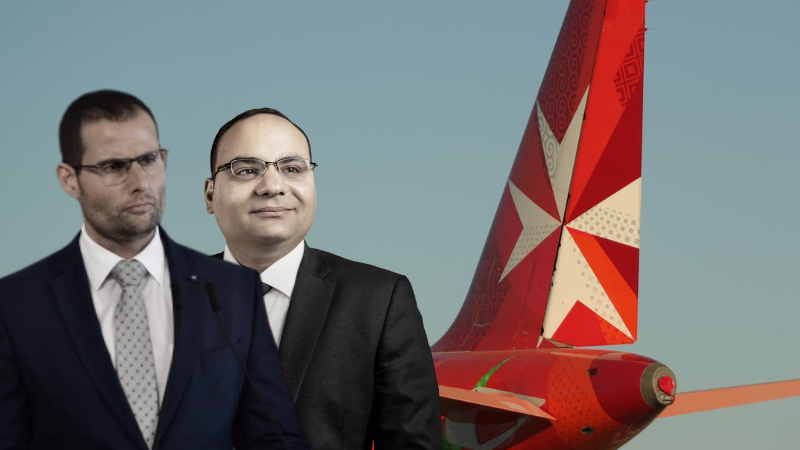 The government has established advanced plans to dissolve Air Malta later this year and transfer its few remaining profitable assets to a new airline, similar to what has already been done in Italy with Alitalia.

The plan will also include the redundancy of all of Air Malta’s workforce, from pilots to ground handlers, and the drawing up of new contracts based on current market conditions, for all those who will be hired by the new government-owned airline.

While all indications from Brussels point towards a failure in ongoing state aid negotiations by the government to obtain a green light for a new €290 million rescue package for Air Malta, a Plan B has been secretly drawn up to be implemented.

The Shift is reliably informed that the backup plan to be put implemented once negotiations on state aid fail – a plan already approved by Prime Minster Robert Abela and Finance Minister Clyde Caruana – aims at setting up a new national airline at the end of October while at the same time declaring the dissolution of Air Malta.

Through this plan, the government will aim to achieve a smooth transition from Air Malta to the new airline, with much less personnel and debts, giving the new airline a fresh start.

All Air Malta staff, still on the books at the date of dissolution, will be given redundancy notices, with some of them given the opportunity to apply for a new job with the new airline.

Yet contracts to be offered will be completely redrawn, with most of the current benefits enjoyed by Air Malta employees slashed. The new contracts will be based on the same conditions as those of low-cost airlines.

Customers with bookings made for Air Malta flights beyond the day of dissolution will either be getting a refund for their tickets or will be offered the possibility of travelling with the new airline. Yet not all current routes will be served by Air Malta’s new airline, as in order to get EU approval, the new airline will need to show that it is a completely separate economic operator and not a successor of Air Malta.

The Shift is informed that so far, the government has not yet decided whether to use, as a vehicle for this transition, Malta MedAir – an airline set up by disgraced former minister Konrad Mizzi in 2018 to compete with Air Malta – or to form a completely new entity.

Malta MedAir is a fully-owned government company that currently has an Airbus A320 on its books and the lucrative Gatwick and Heathrow slots it bought from Air Malta in a creative accounting exercise to make the national airline look profitable.

The Shift is informed that while the GWU has been informally briefed about this possibility, workers have been left clueless about their future.

The government is currently seeking the go-ahead from unions so it can postpone the pre-electoral promise to 577 Air Malta employees of a government job starting today, 11 August. Instead, the government is reneging on its agreement with the employees who signed up for the VET Scheme in the run-up to the elections only a few months ago.

They were promised a job for life in the lead-up to the general elections held in March, but they are now being presented with a golden handshake in a take it or leave it scenario, leading to anger among Air Malta employees who told The Shift they felt “betrayed“.

It is as yet unclear what those promised a government job would face in case of the dissolution of Air Malta.

Following years of mismanagement and changing market conditions, last year the government asked the EU for permission to grant Air Malta €290 million in state aid. The move was struck down in Brussels, with placed demands on Finance Minister Clyde Caruana to present a realistic proposal.

In 2012, following two years of talks, Brussels had allowed the government to pump some €130 million of state aid into Air Malta on the condition that a restructuring exercise would be concluded by 2015 and no more government intervention would be necessary.

Despite some restructuring, the company continued to register massive losses, putting it in an unavoidable bankruptcy scenario if no state intervention is granted soon.

According to strict EU rules aimed at safeguarding competition among European airlines, companies can only provide state aid once every ten years, on a ‘one-time, last-time, principle’.

Asked by The Shift to confirm that the government is working on a plan to dissolve Air Malta and create a new airline, similar to the exercise done in Italy to create Italia Trasporto Aereo S.p.A., better known as ITA, Finance Minister Clyde Caruana once again refused to reply to questions.

The gratitude of the PL (Party of Looters) is kept within very narrow limits SOON AS the vote is cast and the election is over.

Everything that looked rosy before is now painted in a deep black:

As soon as there is nothing left to loot, the cards are turned over and moved on: The long-term memory of many Maltese seems to be very limited.

Thank you ROBBER Abela for this further lesson in shameful political behaviour.

Dear Maltese,
I think that these ‘politicians’ became millionaires only because they enriched themselves on the property of the Maltese. In doing so, they not only violated the law, they also broke the oath.

These are all signs that the country’s finances aren’t healthy and we expect worse to come. Of course the corrupt government will blame everyone for the situation except itself.

Betrayed? I would have thought ‘conned’ . Loyalty is a lofty concept for these crooks and gangsters.
They were conned.

Saviour those were sold and the gov is still getting millions from them. Air Malta is bankrupt.

Dom Mintoff who set up Air Malta must be rolling in his grave. May he rest in peace, provided this government of sorts allows him to.

Going into a dark alley with no end on sight

Going into dark alley with a no end in sight

So why are they still accepting bookings beyond 31st October ?

I agree that our national airline should be dissolved in case where it is no longer feasible to keep up with profitable outcomes. I do also agree that its workers should be redunant and given the possibility to be employed with the new airline and paid in accordance with ongoing market rates. It is only fair, since placing these parasites in Gov Ministries and Entities will only continue to create problems to those working in the public administration, due to the difference in wages.

This is a classic case of what an election can offer. Promises, promises before, unkept promises and bleakness after. Poor workers.

Air Malta is bloated with employees given jobs as favours and inflated salaries that can’t compare elsewhere. “A flight attendant working for Air Malta earns around 3,300 EUR on a monthly average.” https://cabincrewhq.com/recruitment/air-malta

Every day, a nail in the coffin for the honest worker and any entity that is government controlled
Promises and secret agreements are not worth the paper they are written on.
That is what corruption and incompetence leads to.

BIG LIES AND WISHFUL THINKING> AIR MALTA WAS RUINED BY PN AND TABONE WHO PURCHASED AVRO LINERS FOR OVER 200 million!! FURTHERMORE THEY CONTINUED TO SINK THE AIRLINE WITH THE CREATION OF AZZURRA AIR IN ITALY WHICH ONLY MADE MILLIONS OF LOSSES EVERY SINGLE YEAR. NOW TRYING TO PLAY THE FOOLS AND SHIFTING RESPONSABILITIES FOR THE DOWNFALL OF KM >

The the shift news forgot to mention is that the PN always wanted to resolve AirMalta. They put incompetent people and now thus us the result . Those chairpersons should be arrested and investigated why AirMalta is in this state