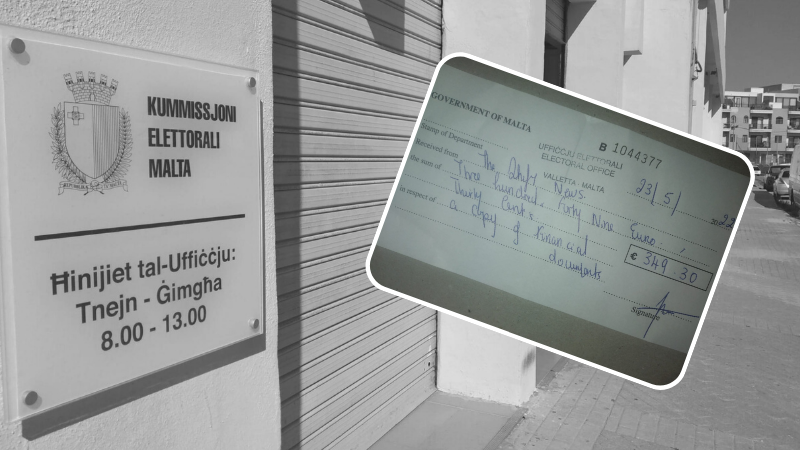 Background: a photo of the entrance to the Electoral Commission's offices in Naxxar. Inset: a photo of the receipt showing the amount paid for a copy of each campaign expenditure report.

Gate-keeping information that’s meant to be released to the general public has been one of the mainstay features of the Labour government since it was first elected in 2013.

Even with information that is distinctly within the public’s best interest, one such gate-keeping practice includes the imposition of unjustifiable fees on those seeking access to information which is rightfully theirs.

It took a total of around five hours to get our hands on a hard copy of every single campaign expenditure report that every candidate that participated in the 2022 general elections is legally obliged to file.

As three other journalists and I sat patiently waiting for our data, we were persistently made aware that we would have to pay a fee for every single sheet that was handed to us, irrespective of whether it would be in soft or hard copy form.

We were all sent scrambling to the nearest ATM when we realised that none of us actually had enough cash in hand to pay for the fee that was being requested. For some obscure reason, the Electoral Commission demands payment in cash or by cheque, excluding card payments altogether.

At €0.14c per page, a rate which compares to commercial prices for full colour A4 printing, we were forced to fork out just shy of €350 simply to obtain copies of reports which the public should unquestionably have access to.

In any other democratic state, access to such information, which is compiled with the aim of holding candidates accountable for every cent they spent on promoting themselves, acts as a hallmark of transparency.

In a country that operates like a mafia state, every legitimate request for information becomes a transaction, one that is carried out not in good faith but in a manner that resembles extortion a lot more than it does anything else.

The worst part of it all is that the campaign expenditure reports that we did manage to go through since we got our hands on them on Monday show clear signs of a box-ticking exercise in which elected MPs were careful to simply oblige the minimum requirements rather than provide a thorough, detailed account of every cent they raised or spent.

While The Shift’s analysis is far from complete and will be fleshed out further accordingly, some of the profiles analysed so far stand out more than others.

In particular, a recurring trend among Labour MPs consisted of claims that shortfall between receipts that were submitted and the amount of declared expenditure were made up using ‘personal funds’, without any accompanying explanation as to where such funds were obtained. In other words, the Electoral Commission seems to simply have taken their word for it when receipts were not available. A note included in Ian Borg’s declaration in which he explains that the “imbalances” in his report were paid for from his own personal savings.

Some of the MPs failed to submit any receipts altogether, including current Justice Minister Jonathan Attard. In the filings made available by the Electoral Commission, Attard declared that he was only submitting a summary of the expenditure rather than a clear paper trail which proves said expenditure. Questions have been sent to Attard’s spokesperson to clarify whether the MP has receipts to back up his summary.

Backbencher MP Rosianne Cutajar submitted a wafer-thin expenditure report with no summary of the money that was spent and with no trail of receipts.

Instead, Cutajar claimed that she received €7,000 in campaign income from her partner, Daniel Farrugia, and that she spent around €9,954.90 on largely unspecified material.

Cutajar was recently reprimanded by the Parliamentary Assembly of the Council of Europe (PACE) for failing to mention her business link with the man accused of commissioning the murder of journalist Daphne Caruana Galizia, Yorgen Fenech, before participating in a debate about the murder of the journalist.

One of the newest faces in Labour’s parliamentary group, Davina Sammut Hili, also failed to submit receipts which provide some form of explanation for her campaign funding, declaring instead that she spent €6,554.21 on unspecified expenses.

A good five-star work shift for The Shift, many thanks for your constant dedication.

All those pre-vote candy-floss promises now blowing away in what looks like a bitter wind.

Just another day in the corrupt fiefdom of Malta… please keep up the relentless pressure on the crooks who have no shame and the police who continue to ignore the corrupt fraudulent declarations.

One day the walls will surely come crashing down on them all.

Public Service services and salaries have to be paid for by somebody, don’t they after all! Are there little tricks to make sure they are?

By the way, what about signing one’s correspondence as Onoroveli so and so?