A PBS news item reporting disciplinary action against a waterpolo club official and well-known Labour activist was deleted shortly after it appeared, following instructions from the Office of the Prime Minister, The Shift can reveal.

On 10 September PBS uploaded a news item about the decision taken by the Aquatic Sports Association (ASA) against Neptunes club official Rainer Scerri.

The report, pictured below, said Scerri has been suspended for ten games and fined €960 after he was found guilty of threatening to kill ASA official Carlo Mifsud (former Lands Authority CEO) at the close of a league waterpolo game. 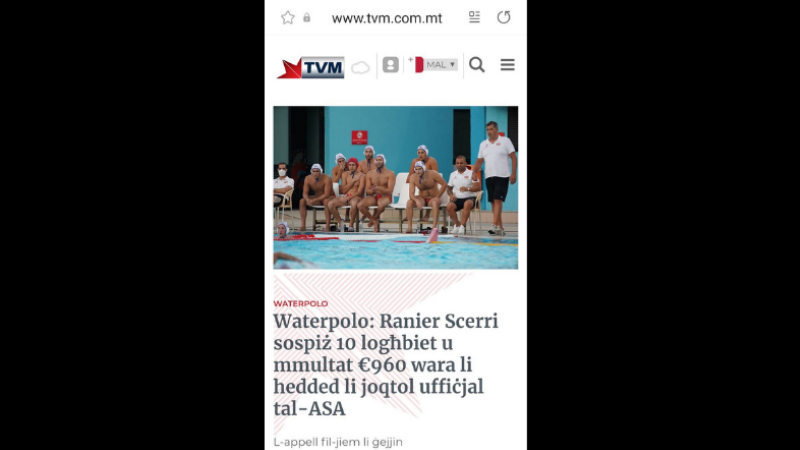 The decision was taken by the ASA’s disciplinary board after an investigation.

It is normal practice for PBS to report the ASA’a disciplinary decisions, however, on this occasion, though the story was published on the national broadcaster’s news portal, it was later taken down. The retraction of the story followed orders “from above,” according to sources familiar with the incident.

PBS sources told The Shift that the decision to delete the news story was taken after “phone calls were made to the PBS head of news Norma Saliba directly from the Office of the Prime Minister.” 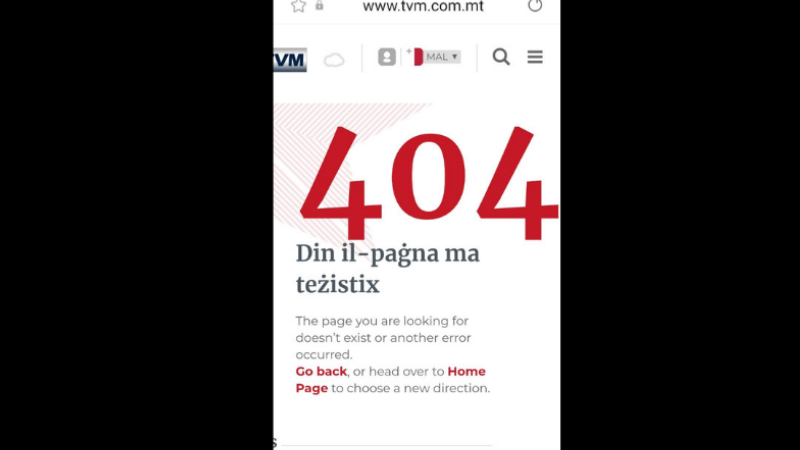 So far, Norma Saliba – herself a Labour activist who was promoted last year to Head of News – has refused to explain what happened, or to confirm that she was ordered by the OPM to withdraw the news story about Scerri.

Asked to explain specifically why the news item was removed and to name the person who spoke to her about taking down the news report, Saliba declined to reply despite various reminders by The Shift.

The sources said Saliba’s bowing to pressure from the OPM and other ministers has become “the order of the day” and the practice is harming the PBS’s already battered reputation.

Norma Saliba – married to Manuel Micallef, a presenter and former head of news of Labour’s TV station – was catapulted into the chief editor’s seat at PBS last year after the retirement of Reno Bugeja.

Sources have told this website that Saliba had been lobbying for the post for years and was eventually given the job on the direct instructions of Prime Minister Robert Abela. Saliba’s husband canvassed for Robert Abela during the Labour leadership contest in January 2020.

Since she took over as head of the state broadcaster’s newsroom, the station has been accused of growing partisan bias in breach of constitutional obligations.

Protests from the Opposition and other minority groups are routinely ignored or partially remedied following the rare intervention of the Broadcasting Authority.

Who is Rainer Scerri?

Hired as a court driver after Labour’s return to power in 2013, Rainer Scerri comes from a Valletta family known to be Labour supporters. His parents served as canvassers for Ministers Michael Falzon and Evarist Bartolo, while Scerri himself is a ubiquitous voice on social media, posting comments in support of the PL government and against the PN opposition and its MPs.

As a waterpolo player and now Neptunes official, he has faced similar disciplinary issues before, after having caused disturbances at the national swimming pool and having been charged in court for injuring a rival team’s doctor.

Rainer’s brother, Clint Scerri has also been subject of news stories in the past: he served as the go-between in the Gaffarena Old Mint Street scandal that led to Micheal Falzon’s sacking from his post as Parliamentary Secretary.

Dubbed as “il-kink tal-lands”, Clint Scerri was revealed to be Michael Falzon’s intermediary in the multi-million swap of public land in favour of Marco Gaffarena.

At the time, Scerri was a ‘person of trust’ with Michael Falzon. Both Clint and his mother, Vicky, are known to be Falzon’s canvassers on the tenth district.

Looks like the OPM and our national broadcaster have taken EU Commission president’s words to heart, “We must protect those who speak truth to power.”

And this was not the first time against the same person:

This was in august 2020 (we are in year 2021). Carlo Mifsud is a labour party delegate. In fact, he was the 1st Lands Authority CEO (https://mt.linkedin.com/in/carlomifsud).

Besides Carlo Mifsud was San Giljan Waterpolo president and Rainer Scerri is of Neptunes…I know….he was of San Giljan one day…let’s see him in action here: https://daphnecaruanagalizia.com/2015/06/clint-scerris-brother-rainer-has-been-put-on-the-public-payroll/

Still sinking with no end in sight

‘Media and freedom of speech are indispensable’ for EU democracy, vice-president of EU commission says