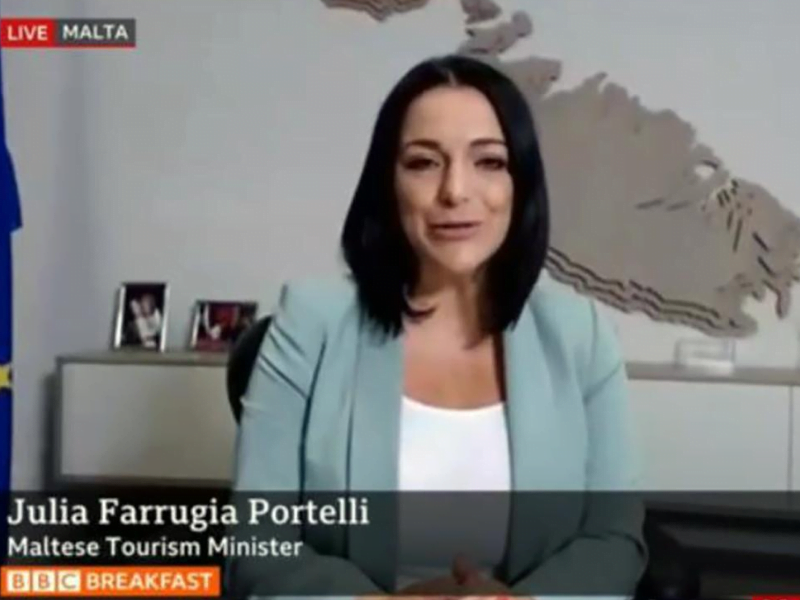 Tourism Minister Julia Farrugia Portelli being interviewed by the BBC where she said Malta could welcome tourists because of "mechanisms" in place.

Language schools were pressured to open this year, as industry insiders told The Shift that Tourism Minister Julia Farrugia Portelli forcefully urged schools to open, clearly wishing to see increasing numbers of tourists flocking to Malta, while disregarding the continuing outbreaks of COVID-19.

As with every tourism-related sector, COVID-19 was like a cold shower for language schools in Malta, but opening the doors to foreign students was, perhaps, a step too far, former head of language schools federation Julian Cassar Torregiani told The Shift.

“The decision simply did not make any sense, because social distancing is not high on most students’ agendas,” he said.

Minister Farrugia Portelli has been at the forefront of criticism, as the public repeatedly questioned her manoeuvres to kickstart the tourist season, evidently ignoring the professional advice of health authorities.

Language schools in Malta were already prepared for a bad year, acknowledging it was going to be an uphill struggle with occupancy rates in most schools reaching only 10%. But being told to open language schools for incoming foreigners in the middle of a pandemic was not a good idea, both for health issues and cost effectiveness.

“There was this element of forcefulness by Minister Farrugia Portelli to have language schools open. Of course, no one can force you to open a school and you can decide to stay closed. However, if you do decide to stay closed when others decide to open it will cost you your priceless relationship with your agent,” Cassar Torregiani told The Shift.

The Tourism Ministry and the Federation of English Language Teaching Organisations (FELTOM) normally correspond for statistical purposes only. Language schools fall under the remit of the Education Minister, so Portelli’s eagerness to approach language schools raised eyebrows.

“A language school is not like a day trip to Gozo. Language courses are planned months before and the booking season this year was at a flat line. Forcing schools to open was short sighted. It seems to me that the Minister is interfering in an industry she does not understand. They took a decision, now we have the numbers,” Cassar Torregiani added.

Cassar Torregiani is the owner of a language school in Malta. He noted that young tourists who travel to Malta in the summer to learn English are only a segment of the market local language schools attract.

“Most of the students are older than 30 who either stayed in Malta during the pandemic or who are waiting for Malta to open to come back and finish their course,” he added.

Language school representatives had voiced their concern with Education Minister Owen Bonnici though he seemed unwilling to become involved.

Sean Legault, the owner of two leading language schools in Malta, told The Shift that the decision to open was “hasty” and said that guidelines for opening were late in being issued.

“We did not have enough time to prepare and market. It would have been better if we started this season late,” he said.

He also pointed out that they were not notified of any risk assessment prior to opening the schools to see what the implications of opening would have on the industry.

The Shift also contacted FELTOM’s current CEO, James Perry, who said that while the federation did think it was early it decided to support the government and open the language schools following a decision during a general meeting.

In an email to Portelli, Perry maintained that “an imminent opening of ELT schools under the current circumstances is not in the interest of the sector, its schools and their students, but acknowledges the direction of government.”

The email also noted and regretted the absence of operating instructions that are to precede the opening of schools, and urged the government to simultaneously establish financial assistance, including the additional costs that an imminent opening incurs until such time when the inflow of students reaches a viable level of sustainability.

A statement by the federation issued earlier in July said it will open “out of goodwill and because we would like to send a positive message that we are willing to pull the same rope as the government in its quest to return to a semblance of normality”.

Paceville, which is home to a number of language schools, is one of the hotspots from which clusters of COVID-19 cases emerged in recent weeks. Additionally, out of the 69 cases reported on Monday, two were tied to language schools.

The spike in cases has caused Malta to be removed from several countries’ travel green lists and also resulted in an international film production scaling back filming in Malta.