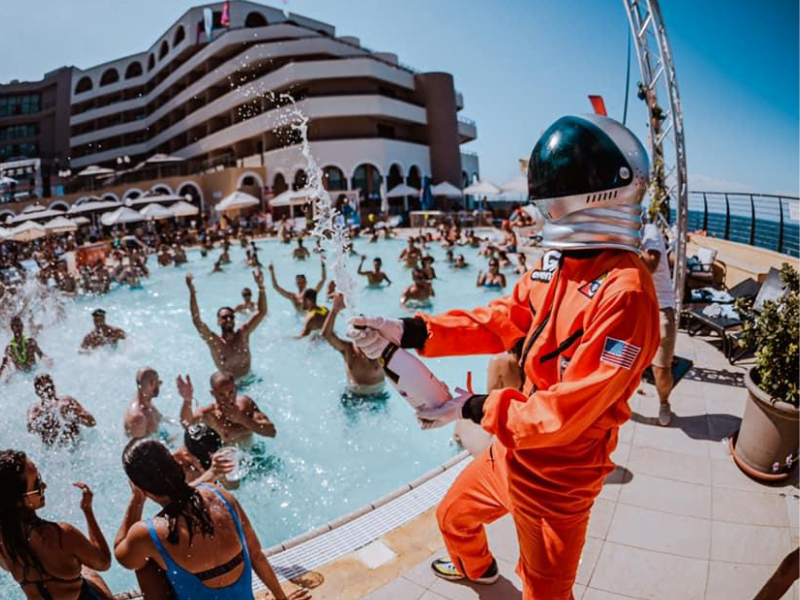 Photo from The Hotel Takeover party, which led to at least six new cases of coronavirus. Photo: Facebook.

Calls for mass events to come to a halt, specifically those targeting party-goers from ‘high-risk’ countries, continue following a spike in COVID-19 cases in the past week, many of which resulted from a weekend-long event.

The total tally of active cases in Malta now totals 112, after a further 12 patients tested positive for COVID-19 in the last 24 hours.

On Wednesday, The Malta Entertainment and Arts Association (MEIA) echoed calls by medical professionals, language schools and even the Malta Employers’ Association saying mass events for which foreigners are flying to Malta must be stopped.

“Since the global cases did not slow down and the pandemic is still very active in other countries, we’re asking to stop all events with foreigners flying in specifically for such events, as they are more likely to spread the disease locally,” the association said in a statement.

Meanwhile, the Medical Association of Malta (MAM) has also called for the withdrawal of permits of events involving more than 10 people as of 3 August, warning that its members will strike and only perform emergency duties unless its demands are met.

The Association also criticised Tourism Minister Julia Farrugia Portelli and the Malta Tourism Authority (MTA) for promoting mass events actively “creating grave danger of a major and uncontrollable epidemic”, and statements made by Prime Minister Robert Abela which have “encouraged people not to comply with the recommendations of the Superintendent of Public Health”.

While other EU countries have cancelled this year’s festival season amid fears of increasing the COVID-19 spread, Malta is opening its doors to international festivals and mass events.

While some local events have been cancelled, there are at least five major events still scheduled for this summer. One of these events is BPM, which aims to attract some 20,000 British tourists to the Maltese Islands.

The local industry cannot be penalised for mass events publicised in Malta which are specifically targeted towards inbound revellers travelling to Malta from high-risk countries in Europe where such countries, like the UK, are not allowing mass events due to their high number of cases, the MEIA said.

One festival, Escape 2 The Island, even states in the promotional video that “Malta saves the summer”. Such a contrast in leniency was picked up by the BBC, which deemed Malta’s “hope” to be 2020’s “festival hotspot” as “a parallel universe”.

In an article published on Wednesday, the British news channel highlighted the concerns raised if “loads of people piled onto the island” which has the UK on the “government’s green light travel list”, despite the pandemic still being active within the country.

So is COVID allergic to Malta??? Why am I seeing festivals scheduled to go ahead next month out there?

Artists performing at some of the events, DJs Friction and Eats Everything told Radio 1 Newsbeat they signed up because of assurances they have been given about safety, it said.

Event organiser Nicky Spiteri, from 365 Entertainment, the events company running the festivals told the news channel that Malta is happy to welcome the British people and that tourism plays “an important role in our economy” saying that such festivals can “save the season” of hotels, restaurants, taxi drivers and clubs.

The Shift reported on Sunday that the event organisers behind mass events this summer, regardless of public health concerns, are those being scrutinised by the Public Accounts Committee for receiving millions in MTA sponsorships in recent years, including 365 events organising events at the venue UNO in which the Zammit Tabonas of the Fortina Group also have a significant stake.

Imagine how much corona Brits are going to take to those festivals in Malta.

The BBC article questioned whether it is possible to social distance in a crowd, despite Spiteri’s reassurances.

The call to stop such gatherings is not the first of its kind. On Tuesday, 11 medical organisations, as well as the Malta Employers Association and the Malta College of Pathologists called for banning mass events.

The increase in new COVID-19 cases in Malta led to the posting of an online petition appealing to authorities to end all mass events. More than 14,000 people have signed the petition at the time of writing.

The MEIA also proposed a number of other measures to be taken with regards to the risk of mass events. These include that the maximum audience capacity is set to a ratio applied according to the size of the venue, with measures endorsed by the Health Authorities, as well as hoarding border or gate present at each event with a number of procedures including mandatory documentation of contact details, temperature control and use of masks or visors.

In its statement, it also called on the government to follow the guidelines and regulations as they should “apply to all and impact everyone equally”.