As Malta is battling the possibility of making it to the Financial Action Task Force (FATF) grey list, the authorities need to show that action is being taken to redress the situation by implementing more rigid regulations on money laundering and on due diligence procedures, with tight achievable timelines.

This was confirmed by experts consulted by The Shift, as a recent report claimed that Malta is increasingly likely to become the first EU country to end up in the FATF grey list. Falling into this list means that a country is not considered as a safe jurisdiction for preventing terror funding and money laundering.

The Financial Intelligence Analysis Unit (FIAU) plays a vital role in ensuring that Malta does not end up on the FATF’s grey list. Players in the financial services industry have been under immense stress over the past months due to the extraordinary pressure on the FIAU.

The country is presented with recommendations and given a specific period to report back to the European branch of the FATF called Moneyval. The implications for Malta are very serious.

Yet, all does not seem well. Kristina Arbociute, a senior FIAU official, who is paid from taxpayers’ money to combat money laundering remains keen to post pictures of herself with Patrick O’Brien, the communication director of XNT Ltd, formerly known as Exante. The company describes O’Brien as “one of life’s rarest creatures” on its website. He is described by his employer as the “gaming industry’s local charity ambassador”.

Exante’s director Alexey Kirienko was a guest of disgraced former Prime Minister Joseph Muscat a few weeks after the general election. His name then appeared in the list of over 2,000 people who became Maltese citizens in 2016.

In August 2015, the US SEC filed fraud charges against over 30 people for allegedly taking part in a scheme to profit from stolen insider information about corporate earnings announcements.

The international cybercrime ring, composed of two Ukrainians hackers and dozens of traders around the world, allegedly broke into newswire services to obtain the information, generating more than $100 million in illegal profits. 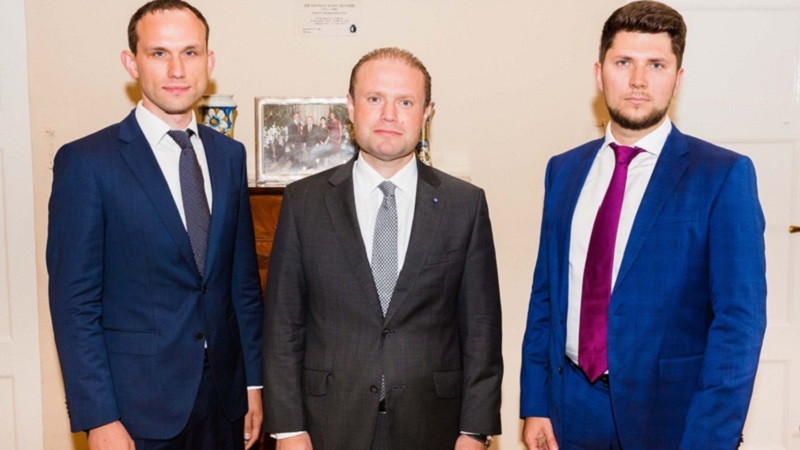 Exante had charges against it from the Maltese regulator (MFSA), which were dismissed in October 2015, only two months after news of the allegations by the SEC involving Exante emerged.

Attorney General Peter Grech and local government bodies dropped criminal and civil allegations against Malta-based prime broker Exante and its directors while the parallel investigation from the SEC at the time was escalating with 32 defendants charged.

The SEC dismissed its claims against Exante four months later, in February 2016, but nine of its brokerage customers were charged for alleged illegal trading through a brokerage account held in Exante’s name.

Exante had said in a statement that a lack of understanding of its business model was the main reason for the allegations. While Exante was exonerated, company insiders were still embroiled in the charges.

Exante defines itself as a trailblazer when it comes to cryptocurrencies. They were treated lavishly by former President Marie Louise Coleiro Preca. The Malta-based broker Exante then signed a deal in Kazakhstan to develop the ex-Soviet nation’s untapped cryptocurrency market, a move that was aligned with the government’s strategy on digital currencies.

A few months before the firm signed the agreement, Muscat had announced a national strategy to make Malta “the Bitcoin continent of Europe” (Bitcoin is a cryptocurrency) – yet another promise that has fallen flat on its face.

Henley and Partners, the private concessionaires awarded a multimillion-euro contract to design and operate Malta’s cash for passport programme, was also awarded the mandate to design a residence by investment programme for Kazakhstan. Whether this boils down to coincidence or serves as further proof of a network of interests remains to be seen. Arbociute is a former employee of XNT (Exante) and moved straight to the FIAU in a move that raised eyebrows in the sector, also because of the company’s reputation and track record.

Photos of FIAU official Arbociute with O’Brien available on social media have been described by players in the industry as “in bad taste” considering the FIAU’s efforts to create a new image of itself. The FIAU’s code of ethics and professional conduct clearly states that it should demonstrate transparency in decision-making processes.

Given her role as Senior Associate, Arbociute has access to investigation files and to knowledge which can influence investigations and ultimately decisions by the FIAU.

A source in the industry said: “It is very convenient to be a dear friend of a senior FIAU official when you have such a history with the US SEC”.