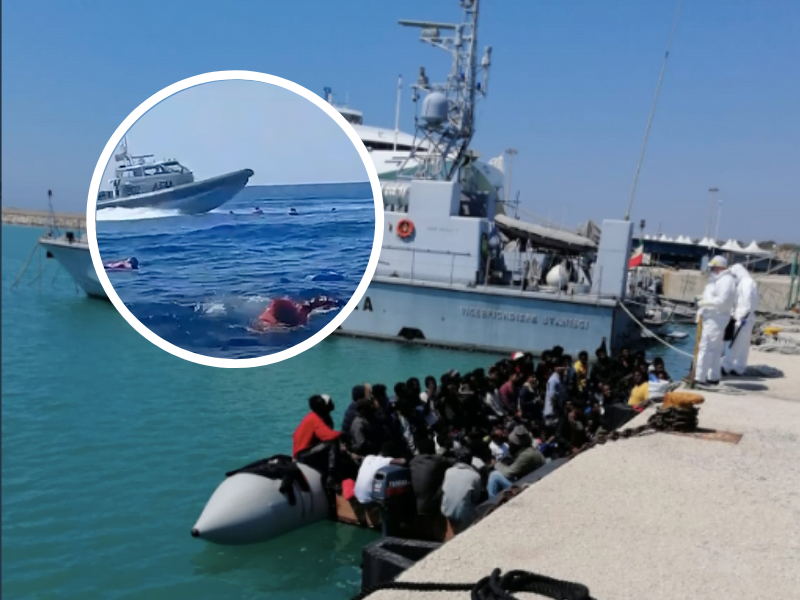 The Armed Forces of Malta (AFM) endangered the lives of migrants and asylum seekers, threatening them, and equipping and directing them towards Italy, according to a report by NGO Alarm Phone.

The report, published on Wednesday, includes testimonies and videos by survivors, who state that the AFM endangered the lives of 101 asylum seekers in distress as they were in Maltese waters, and then equipped them and sent them off towards Italy.

On the fateful Easter weekend during which 12 people died and another 51 were returned to Libya following Malta’s closure of ports, another rubber dinghy, which was described as “overcrowded and unseaworthy” made its way to Pozzallo, according to the report.

After undergoing quarantine in Italy, some of the 101 survivors contacted Alarm Phone and shared video evidence and testimonies which “raise grave concerns about the AFM’s behaviour”, the NGO said.

According to the testimonies, after failing to assist the boat, members of the AFM endangered and threatened the people in distress aboard the dinghy, and then went on to provide fuel, an engine and GPS coordinates to continue to Italy. Alarm Phone deemed it a “practice commonly associated with smuggling operations”.

The testimonies narrate how the survivors departed from Libya by boat on 8 April and moved north, arriving in Malta on 11 April. As they neared Maltese shores, a white vessel appeared and provided red life vests to the passengers, according to one of the testimonies.

Initially, this first AFM vessel attempted to send the dinghy back to Libya. It was the second vessel that then guided the rubber boat to Italy.

In this first instance, as they neared Marsa, the AFM vessel requested their satellite phone. The officers then allegedly changed GPS configurations for Malta to those for Libya and handed it back.

“They told us to go back to Libya and configured the GPS.”

Then, the officers allegedly threatened the passengers on board in an attempt to force it to turn and head back south. Frightened and seeking to enforce rescue by the military, several people jumped into the sea. But instead of rescuing those overboard, the survivors said the AFM manoeuvered their boat dangerously close to the people in the water, which is shown in the footage provided by Alarm Phone.

“They started doing that to not us let moving forward. The people in the water, me as well I was one of them and I was wearing heavy clothes and wearing the life jacket. And my heavy clothes were pulling me down and the water was heavy. None of us was used to swimming in the sea before. They were around 20 or 25 people jumping in the water almost drowning,” according to one reported testimony.

The AFM allegedly provided ropes for those overboard to climb back into their rubber dinghy.

Following this incident, a grey larger vessel carrying a Maltese flag appeared, from which an officer, “a tall man, wearing black clothes” informed the distressed that Malta was infected by the virus and unable to accept more people. One reported testimony by a survivor adds that several guns were pointed at them in a threat.

“They raised their guns to scare us and didn’t shoot us. We were very tired, but they told us to go back… they wouldn’t let us in, but we were all tired of being at sea,” one survivor said. When they were back onboard their rubber dinghy, the armed forces provided bottles of water.

The AFM then reportedly tied ropes to the boat and started to pull it, according to the report, during which the engine of the rubber dinghy broke.

The people in distress were determined not to return to Libya and made this clear to AFM officers.  The AFM then provided five gallons of petrol and an engine, but inserted GPS coordinates into the satellite phone and instructed them to continue on their journey to Italy.

Survivors also report that officers from the @Armed_Forces_MT threatened them with weapons and gave them a rope to climb back into the rubber boat. The officer said: “Malta has a virus … We can't take you there, everyone is sick in Malta.” 7/12

“After they gave us the engine, we attached it and we put the fuel and they gave us a compass in a wooden box. They told us there two zeros, when the arrow is directed to the two zeros, go that way until you find yourselves in a city in Italy,” a testimony reads

The AFM vessel then escorted the boat for hours, provided them with fuel and then directed them to Italy.

The 101 people arrived at Pozzallo harbour on 12 April and were placed under quarantine. The Pozzallo mayor Roberto Ammatuna had argued: “it is undoubtedly the  strategy of the traffickers, who most likely transferred many desperate people from a mother ship to a smaller boat.”

In questions following the article, the NGO asked whether it was the first time a migrant boat was advised and equipped to go to Italy, and whether the Italians were informed about the case, and whether the manoeuvres by the AFM vessel in line with search and rescue operation standards.