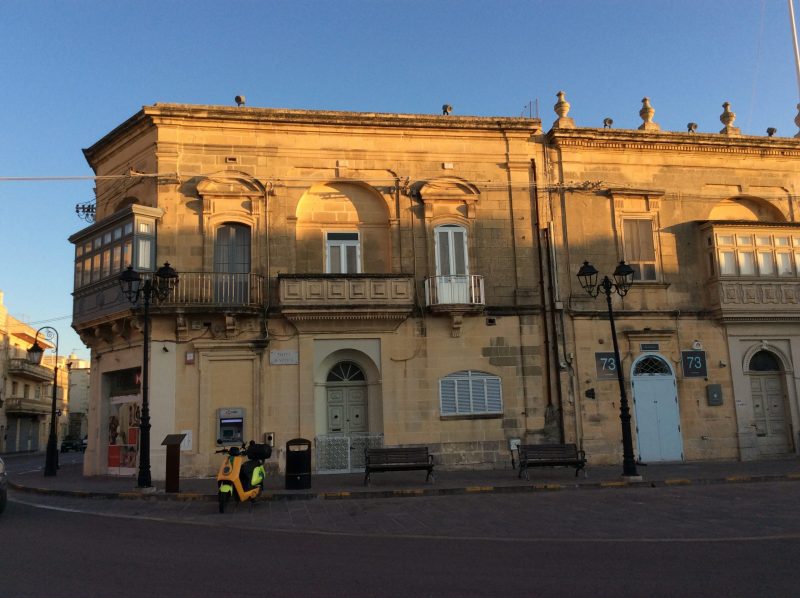 The building with the grey door, to the left of number 73, is earmarked to be built into a 19-room hotel in Xaghra square.

The Xagħra local council has taken a unanimous decision to fight an application for a 19-room, four-storey hotel bang in the centre of its town square.

“The council has unanimously decided that it will do its utmost to oppose this development,” Mayor Christian Zammit told The Shift. In a letter to the Planning Authority two weeks earlier, the council said it had “never been consulted on this sensitive application”.

A spokesperson for the PA said in response to questions that the council was “consulted” on 8 May 2019. At the time, the council was dissolved in the run-up to local council elections on 25 May. The new post-election council only convened again the following month.

​“We expect something more than a mere notification,” Zammit said. “In our humble opinion, this project has a major impact on the locality and we are asking for meaningful consultation and the chance to appoint a representative to vote on the Board.”

The Malta Tourism Authority had issued a hotel permit to Agius on behalf of Ben Hotels, but the name of the applicant on the PA website and the case officer report was Joseph Vella – a name that does not come up on registration records of Ben Hotels.

​Ben Hotels is owned by the Agius family, the owners of the supermarket chain Ta’ Dirjanu. Mark Agius is also separately involved in several contentious developments in Gozo in conjunction with property magnate Joseph Portelli.

​In another twist, project architect Saviour Micallef presented modified plans of the proposed development during the planning hearing in which, most significantly, the top floor was receded further back from the façade of the building. This led the PA Board to send back the development application to the Planning Directorate for a fresh assessment of the amended plans.

​The local council is now arguing that it should have been consulted once the fresh plans were submitted. In its letter of 29 April to the PA, it objected to the basement, which would entail excavation into the bedrock in an area within the buffer zone of Ġgantija Neolithic Temples.

In the letter, the council also referred to Micallef’s argument during the hearing one month ago that other excavations were permitted elsewhere within the buffer zone by saying that “none of these was within the village square”.

It added that, in other instances involving excavations within the wider buffer zone, Heritage Malta had “contended that ‘any development in the buffer zone would not only endanger the heritage status of the Ggantija temples but of all six megalithic sites in Malta and Gozo”.

​The council said the “formation of a basement would set a dangerous precedent” and reiterated the same point in its objection to the upper floor, which would rise above the adjacent building. This would amount to a “penthouse level in the heart of the Urban Conservation Area, within the buffer zone of Ġgantija temples and metres away from Grade 1 Xagħra Basilica where no such commitments exist”.

It added that this incongruence would be even more consequential given that the applicant also wanted to demolish the building while retaining the façade. This means the top floor would be even higher than if simply added on to the existent building.

​“Having a hotel next door will be good for business,” said David Pinfold, owner of 73 in the Square, the adjacent café and bar. “However, having the top floor rising higher than adjacent buildings will create a precedent.”

​“The excavation would also make the square unusable – the noise, the dust – no one would want to come to the square,” he added. “And if they find any archaeological remains, as they are likely to given the location, it could take months to complete the excavation. And that would badly affect everyone who has a business in – or lives in – the square.”

​Xagħra Square boasts the densest cluster of entertainment outlets in Gozo – with nine restaurants, cafes and bars – making it one of the liveliest squares on the island.

​“Maybe the PA does not see this as a project of major impact,” Zammit told The Shift. “But in our humble opinion, this has a major impact on the locality especially given its sensitive location.”

Inquiry criticised for not delving into relations between Fenech, young lawyer