Daphne Caruana Galizia’s public inquiry: what we know and what we don’t

The grief of a family and its sustained campaign for justice and the truth behind the assassination of journalist Daphne Caruana Galizia, who was the subject of an intense State-sponsored online hate campaign, was among the main facts that emerged during the various testimonies in the public inquiry.

There was another common theme that stood out – the standard reply used by present and former staff at the Office of the Prime Minister who answered questions by the three judges sitting on the inquiry board with “I don’t remember” or “I don’t know” or “but I’m a person of trust”. These attempts to deflect responsibility on events did not go unnoticed by the Board that had to remind them, repeatedly, that they were under oath.

The public inquiry was the result of constant campaigning of the Caruana Galizia family together with other organisations. Former prime minister Joseph Muscat dragged his feet for two years after her murder before giving the go-ahead, a fact mentioned by former European Court of Human Rights Judge Vincent De Gaetano in a recent interview.

The Board of Inquiry is composed of retired Judge Michael Mallia as chairperson, retired Chief Justice Joseph Said Pullicino and Judge Abigail Lofaro, who is still a serving judge.

Since December 2019, the Board has been hearing evidence in public to try and establish the background to her murder, and whether it could have been prevented. It is tasked with examining measures in place to ensure the same could never happen again.

The hearings came to a standstill earlier this month when the courts were shut down as part of government measures to stop the spread of coronavirus. This is a round-up of where it left off.

The testimonies of her close family portrayed a different picture of Caruana Galizia, one that was known only to her loved ones who gave a harrowing portrayal of the environment she was working in and how it had worsened over the years.

She became more fearful for her safety when the Labour Party was voted into government in 2013 and this increased even more during the last years of her life.

In her testimony, Caruana Galizia’s mother, Rose Vella, said that both she and her husband were worried about their daughter’s safety and the lack of protection from the authorities.

“On one occasion we were having supper at a restaurant together and there was a report on a website saying Daphne was there and describing what she was wearing.”

“The next time she returned to the same cafe, she was told by the owner that the premises were searched and turned upside down following her visit,” Caruana Galizia’s mother said.

Caruana Galizia’s sons, Matthew, Paul and Andrew, all gave strong, impassioned testimonies about their mother’s work, the obstacles they encountered from the authorities after her death and the way forward.

“This is a chance to push Malta forwards, a chance for us to start behaving like a democracy… We have to decide whether the statehood that landed in our laps should be used to improve the lives of citizens, or whether it exists only to continue providing a civilian front for the criminal organisation that killed my mother,” Matthew said during his testimony.

Police commissioners – past and present

Her son Paul told the Board that “things really changed when Muscat removed (John) Rizzo” when the Labour Party won the general election in 2013.

Four police commissioners testified before the Board – John Rizzo held the position for the longest between 2001 and 2013. When the Labour Party won the 2013 elections, Rizzo was then replaced by Peter Paul Zammit who was commissioner for 14 months until he was succeeded by Ray Zammit in June 2014.

Six months later, Michael Cassar then stepped into the role for the next 18 months until he was replaced by Lawrence Cutajar. Cutajar then resigned when Prime Minister Robert Abela took office last January. 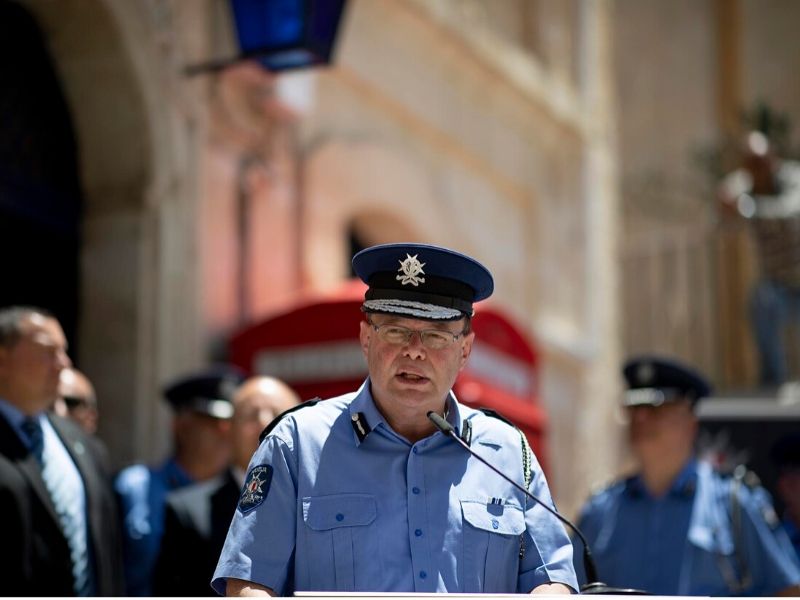 Through their testimonies, it emerged that the police officer who was permanently stationed at the journalist’s house was removed when Rizzo resigned from Commissioner. At most, there were frequent police patrols in the area.

The commissioners were also questioned heavily by the Board about their role in fighting the allegations of corruption. Rizzo told the Board that he used to investigate the revelations on Caruana Galizia’s blog.

On the other hand, Cassar, who resigned shortly after the 2016 Panama Papers revelations, was given documents by the Financial Intelligence Analysis Unit (FIAU) prior to the damning exposé.

Investigating and acting on financial crime

The testimonies by FIAU employees showed the unit to be severely under-resourced. Still, no action was taken by the police on its work.

He left the unit as he found it “difficult for the FIAU to exert its duty according to the law and international obligations”. The lack of experts and resources to tackle financial crime in the police force was one of the reasons why the FIAU’s work was ineffective – a statement that was reiterated by Jonathan Ferris and Assistant Commissioner Ian Abdilla.

The testimonies given by witnesses from the Malta Financial Services Authority were mainly in relation to the action taken following the Panama Papers revelations and corruption allegations linked with Pilatus Bank, which were reported by Caruana Galizia.

Former chairman Joe Bannister said he did not take action on Pilatus Bank because it was the responsibility of the supervisory Board to so. The shifting of blame was a common occurrence in the different testimonies before the Inquiry Board.

MFSA Chief Officer of Supervision Marianne Scicluna said the Authority could not take action on individuals such as Konrad Mizzi and Keith Schembri as these are not licenced with the Authority. However, there are ongoing investigations into Brian Tonna and Karl Cini because their two companies BT International Limited and BT Limited Management are registered with the MFSA.

The Shift’s founder Caroline Muscat presented a detailed dossier about the online harassment and dehumanisation targeting Caruana Galizia both before and after her death that was the result of a six-month investigation in secret and closed pro-Labour online groups that were even administered by employees at the Justice Ministry.

Muscat explained that the discourse in these groups revolved around online harassment and disinformation with politicians and government officials also using the social media platform to disintermediate the press and change the narrative. The groups also revealed a high degree of control and coordination as the instances of mass trolling.

Matthew Caruana Galizia and Corinne Vella, the late journalist’s sister, also presented dossiers and reports highlighting the online harassment – an example of this was the way the journalist was portrayed on Labour Party TV One as a witch.

OPM official Glenn Bedingfield admitted that his blog was about “retaliation” for the “attacks” by Caruana Galizia. He justified his posts, which included intrusions in her private life while he worked at the Prime Minister’s communications office, as an “equal and opposite reaction” to her articles.

Former OPM staff Neville Gafà also justified his posts on social media targeting the late journalist Daphne Caruana Galizia as “retaliation” for what she posted on him despite the family’s lawyers drawing his attention to the fact that he was a public official attacking a journalist. Gafà told the Board of Inquiry that people would send him photos of Caruana Galizia when she was out in public and he would upload them.

A line-up of government officials who testified in the inquiry told the Board several times that they were unable to recall or provide adequate answers to many questions, saying they did not remember what had happened.

Their refusal to give clear answers often led to members of the Board taking a firm stand with the officials. Said Pullicino made it clear to Nigel Vella, deputy head of Communications at the Office of the Prime Minister: “We’re troubled by your lack of credibility”. When he kept on saying that his job was limited to communications and he did not know anything else, Mallia told him: “Why are you paid if you gave no input? How is it possible that you were between four walls, and you heard nothing?”

Ronnie Vella was pressed by the Board on his presence in a Rabat bar in May 2017. “I don’t remember,” he said. He quickly changed his tune when presented with full-blown colour photos showing him seated in the bar where a journalist was also present. The concern was whether the journalist was being followed.

Many OPM communication officials were also called in testify to answer questions about an incident at Castille in the early hours of 29 November, when journalists were prevented from leaving the room following a press conference by Muscat.

Reuben Sciberras, Head of Secretariat at the tourism ministry, insisted that he did not form part of the group of men preventing the media from leaving.  OPM Head of Communications Matthew Carbone also denied that journalists were held in the room against their will. Newsrooms released footage on the incident to counter these claims.

The incident has been reported as a threat to press freedom to the Council of Europe.

Crime in the time of COVID-19