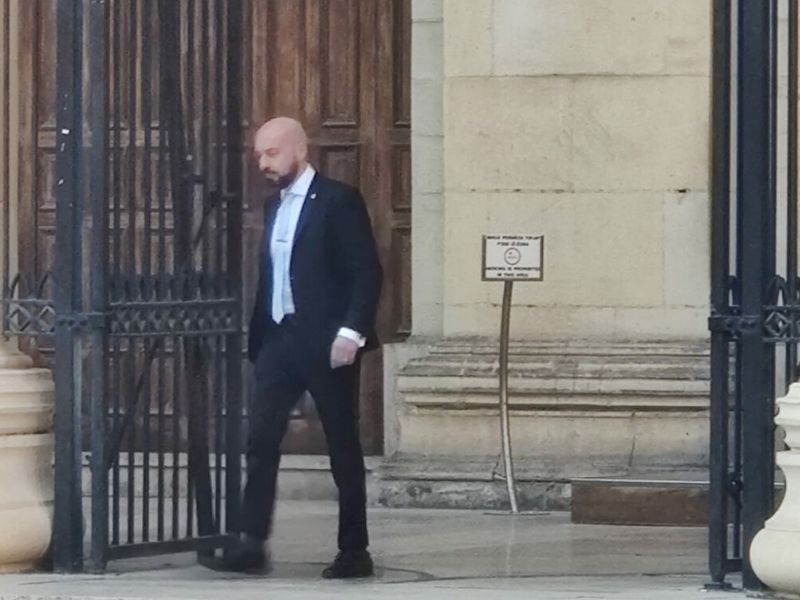 Neville Gafa walks out of court.

Neville Gafà justified his posts on social media targeting the late journalist Daphne Caruana Galizia as “retaliation” for what she posted on him despite the family’s lawyers drawing his attention to the fact that he was a public official attacking a journalist.

Like Josef Caruana who forms part of the prime minister’s communications team, Gafà replied that he was “a person of trust” – a line being used by those at the core of Castille when testifying in the public inquiry into the journalist’s assassination.

Lawyer Jason Azzopardi asked Gafà whether former prime minister Joseph Muscat or his chief of staff Keith Schembri, who is a close friend of Gafà, had ever told him it was unacceptable that a public official attacked a journalist through his posts.

“I am a person of trust. And yes it is possible that my superiors (Muscat and Schembri) drew my attention to it. Sometimes I removed the posts after they spoke to me,” Gafà said taking the oath on the Koran.

Gafà told the Board of Inquiry that people would send him photos of Caruana Galizia when she was out in public and he would upload them. Judge Michael Mallia picked up on this, pointing out that Caruana Galizia published photos that he himself had uploaded on his social media.

‘Yes but she wrote about me and that was worse,” he said, submitting a dossier to the Board.

Caruana Galizia’s sister, Corinne Vella, also presented the Board with a dossier of his posts on the journalist brutally killed in a car bomb on 16 October 2017.

In a separate hearing, Gafa’s posts were also included in evidence submitted to the Board of Inquiry on disinformation and hate speech against the journalist in the Labour Party’s secret and closed online groups presented by The Shift’s Managing Editor Caroline Muscat.

A post by Neville Gafa, given a job at the Office of the Prime Minister after his involvement in the Libyan visa scandal was revealed.

When asked whether Gafà had ever discussed with Schembri any of the allegations that emerged against Schembri as part of the murder investigations into Caruana Galizia’s death, Gafà said: “no”.

This point was raised several times by the Board, with Judge Abigail Lofaro querying how the two men were such close friends but never discussed these matters.

Gafà also denied any knowledge of the Truth Project – a professional and highly coordinated campaign aimed at discrediting the work of The Daphne Project on the one-year anniversary of Caruana Galizia’s assassination. He claimed that he only found out about them in recent weeks through media reports.

Lawyer Therese Commodini Cachia, who is representing the Caruana Galizia family, pointed out that he had personally shared posts by ‘The Truth Project’ at least two years ago. “I didn’t know about it,” he said.

Gafà was the source of speculation for months as the press tried to figure out which government department he worked in after it was discovered he had visited Tripoli and met with a warlord. It followed the medical visas scandal in which Gafà was involved.

He was asked by the family’s lawyers about his trip to Libya, referring to an article by The Shift that published leaked documents showing Gafà had entered Libya on government invitation to visit the Maltese embassy, which was shut down at the time. He went to Libya with Kenneth Camilleri. “What is your job?” the Board asked.

Gafà told the inquiry that he started working as a projects director at the Foundation for Medical Services in 2013. He had started within the OPM and was transferred to the Health Ministry. He then worked as a person of trust within the OPM.

He said his job was “coordination” between the OPM and ministries at the time. He worked on the second floor, “with the prime minister” [and chief of staff Keith Schembri] after he was kicked out by Deputy Prime Minister Chris Fearne. He said he was now unemployed.

Gafà also told the court that Schembri was “worried” about losing his phone, which disappeared as the revelations in the investigation linked him to the journalist’s assassination.

“Did he file a police report?” the family’s lawyer asked.

Public Inquiry Board warns PM’s staff: ‘We’re troubled by your lack of credibility’

Throwing cash at the scam of the two-headed man