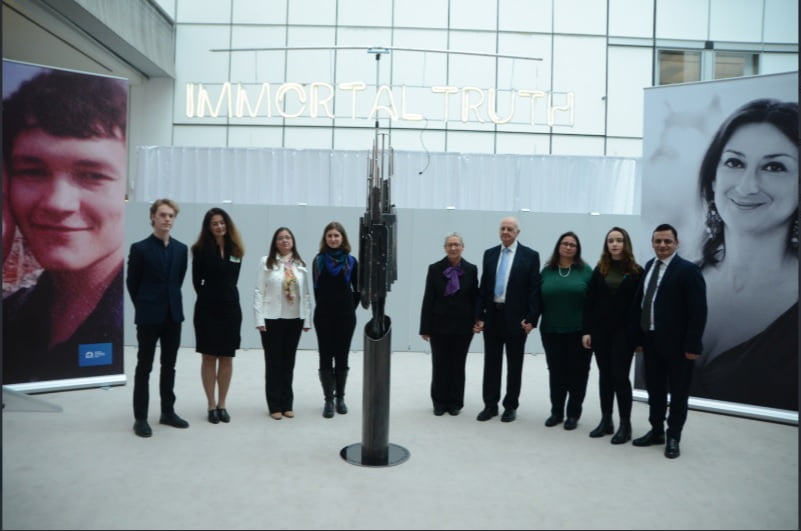 Family members of the Caruana Galizia and Kuciak family stand by the memorial dedicated to the two murdered journalists in the European Parliament.

European Commission Vice President Vera Jourova has called for full prosecutions of all the politicians involved in the murders of journalists Jan Kuciak and Daphne Caruana Galizia during the unveiling of a work of art at the European Parliament today.

The work of art, which forms part of a permanent art exhibition called ‘Immortal Truth’, is made up of a metal pillar with the words ‘truth’ and ‘immortal’ encased it.

#AllForJan #DaphneCaruanaGalizia: “…something very bad in the foundation of the state..” ⁦@VeraJourova⁩ now in ⁦@Europarl_EN⁩ calling for full prosecutions in #Malta and #Slovakia. ⁦@DavidCasaMEP⁩’s Immortal Truths exhibition. EU pressure not waning. pic.twitter.com/b9bP83u3Xb

Caruana Galizia was murdered on 16 October 2017 when a bomb placed under her car exploded, just minutes after she left her house.

Kuciak and his girlfriend Martina Kušnírová were shot by hired assassins in their home in Bratislava in February 2018.

Their murders shocked the international community as the two journalists were investigating and revealing corruption in their countries.

Quaestor and Maltese MEP David Casa, who organised the exhibition together with Slovak MEP Lucia Duris Nicholsonova, said justice in both Caruana Galizia’s murder and her investigations was still being prevented from running its course.

“Politicians complicit with the accused murderers are still on the loose. We will not rest until they are brought to justice; until there is real change,” Casa said.

#DaphneCaruanaGalizia was murdered more than 2 years ago to try and stop her from revealing the truth.

The assassins failed. Truth never dies. Truth is immortal. I urge you to watch this video, which we aired at the @Europarl_EN today, and share its powerful message. pic.twitter.com/FQK8D429LF

Casa praised the European Parliament for always standing with the Maltese people and with Caruana Galizia’s family. “We must never again allow journalists to endure what Daphne and Jan endured.  We will continue to do everything in our power to protect investigative journalists.”

Members of Caruana Galizia’s family together with those of Kuciak were also present for the unveiling together with Jourova and the European Parliament Vice-President Mairead McGuinness, who said they would keep on working for justice.

In a joint video released before the unveiling, Casa and Nicholsonova said Kuciak and Caruana Galizia were the ones who asked the questions no one else did and fought for the truth.

“Malta is grateful for the fight for truth but the fight is far from over. Journalists are still being attacked and those who failed to protect them are still out there, exercising their power,” Casa said.

“For their sacrifice and dedication, a monument that will stand in the European Parliament in their honour and in honour of their fight,” Nicholsonova said.

“We cannot forget that the truth is immortal”.