Prime Minister Joseph Muscat (left) and developer Joseph Portelli (right) who was the subject of the emails by Labour activist Joseph Dalli.

‘What the fuck, Joe’: Emails to PM reveal dismissal of abuse by developer

Portelli, who has become notorious under a Labour government for illegalities never addressed by law enforcement authorities and a string of controversial planning permits, was brought to the attention of Muscat in 2014, according to emails being published by The Shift for the first time.

In an email to the Prime Minister on 29 June, 2014, Joseph Dalli, who says he was at the time helping the Party in government with messaging and social media monitoring, warned the Prime Minister that the government’s failure to rein in illegalities by those who “donated to the Party” made them no different to all that they had campaigned against when in opposition. The Prime Minister’s chief of staff Keith Schembri is copied in the emails.

“He has illegal sites all over the island. Are we gonna let things remain the same with contractors and MEPA? In the past we used to say they were in their pockets, what do we say about today? I fought an illegality for five months and I’m still at the same place, with no result. Like me there are many others, most haven’t spoken in fear of revenge” Dalli said. Muscat answered Dalli with, “what the fuck, Joe”. Yet it is unclear whether he is referring to Portelli’s string of illegalities or his reference to Party donations. Questions sent to the Prime Minister’s Office on the amount Portelli donated to the Labour Party in government remained unanswered.

Following his email to the Prime Minister in 2014, Dalli reacted to recent reports on the controversial permit granted to Portelli for a villa in an ODZ area in Qala with a new email on 31 October where he called out the Prime Minister for ignoring problems caused by those close to the Party for five years.

Forwarding again his 2014 message to the Prime Minister, Dalli said: “This email is just as relevant today, if not more relevant today than it was five years ago when it was written. The same developer that the Prime Minister protected is now conducting violations on public land in Gozo… and Prim you can’t deny you don’t know him now. You visited his quaint projects and you accepted his donations.”

Questions were also sent to Portelli, asking him about comments made in his regard. He told The Shift he was “abroad with limited access to the internet”.

Dalli was referring to work carried out by Portelli at San Blas in Gozo on land not yet in his name and without any permits. The Planning Authority had confirmed the structures were built without a permit while official documents showed the land he had started to develop still belonged to the public.

Dalli also highlights a separate case with Muscat on an agricultural field in Nadur, Gozo, that Portelli continued to develop despite enforcement notices in 2008 and 2012. Not only did Portelli ignore the warnings with no consequence, but he continued work in the area without a permit.

Photos taken recently show that the same supposedly agricultural land has been levelled out and used for storage of a boat trailer and building material, 10 years after the first enforcement notice.

“It is incredibly disheartening that after we fought wholeheartedly to change the system into what we were promised would be an open, transparent government with zero tolerance towards corruption and abuse; six years on and the same abuse, if not worse is still ongoing. Sadly, this never changed, as my personal experience with such abuse took place four years ago, merely a year after the promised change,” Dalli told The Shift. Over the years, he fell out with Muscat. 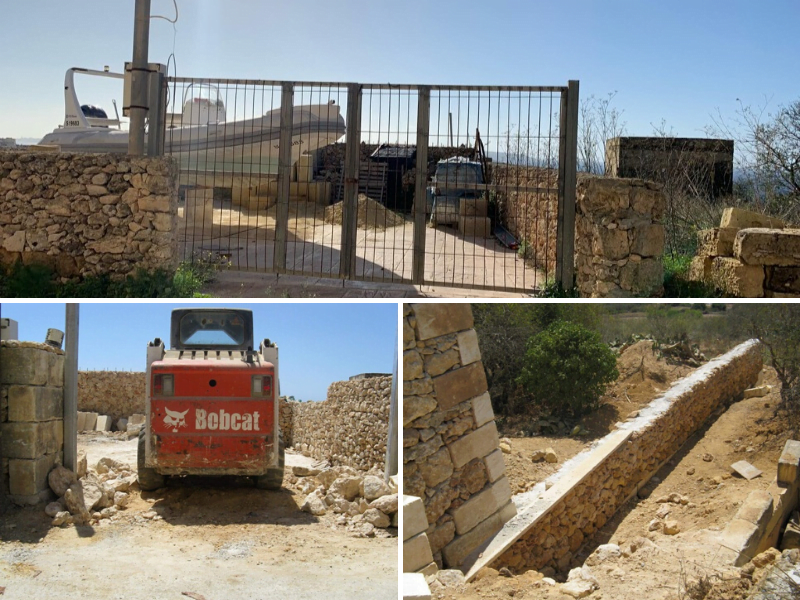 Opposition MP Marthese Portelli resigned from the Planning Board following the Qala permit given to Portelli. “The Planning Authority has been taken over by people who keep ignoring the common good and continue to work for the benefit of the few,” she said.

Apart from the Qala ODZ villa controversy and the development of the Nadur agricultural land, Portelli has been exposed running an illegal batching plant in San Lawrenz, Gozo, with one of his clients reported to be Gozo Minister Justyne Caruana via direct orders.