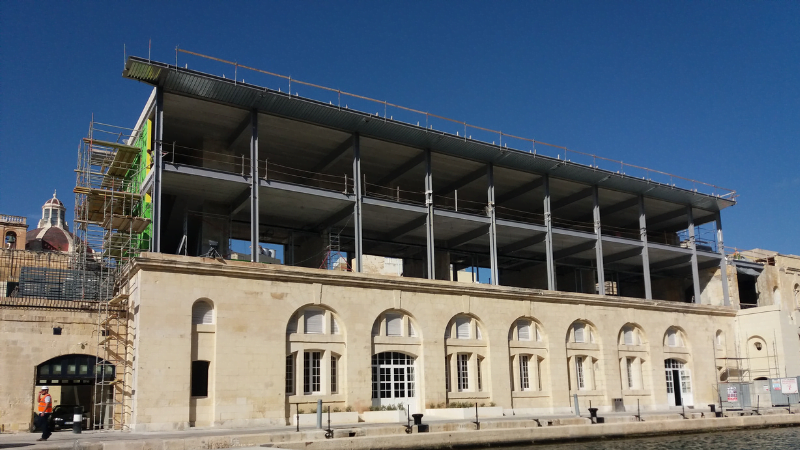 A former staff member of the American University of Malta (AUM) told The Shift News his story, listing the reasons why he believes that the project for which the government handed over 18,000 square metres of prime ODZ land at Zonqor and the historic Dock 1 at Coscpicua to an unknown Jordanian individual was designed to fail.

He moved from the US to Malta, drawn by a lucrative salary and the chance to build something new. “How many people start a university?” he said. “What an incredible opportunity. We were going to create something from scratch and make it better than anything you’ve ever seen before”.

Looking back, he understands this view as ‘utopian’. “We should have known because the company that owned AUM wasn’t thinking, ‘How do we create the perfect university?’

The government signed a contract with Sadeen Education Investment Ltd, a Malta-registered company set up in June 2014 and owned by one man: the Jordanian hotel developer and construction magnate Hani Hasan Naji Salah.

Economy Minister Chris Cardona had said that the AUM “will place Malta on the tertiary education’s global map”. Cardona estimated the total cost of the project, including the Zonqor campus, at €115 million.

Cardona claimed it would generate between €20 and €25 million, with an additional €9 million in government revenue, and that it would create 750 jobs. Three years later, none of these revenue projections or jobs has materialised.

The opportunity to live on a Mediterranean island was also an attractive prospect for faculty applicants. “It’s beautiful, Malta. A lot of the faculty were on the verge of retiring and they wanted to extend their teaching, make a little bit more money and maybe retire, buy some property here in Malta,” the former staff member said on condition of anonymity.

Doubts began to surface during the very first Skype interview with American Provost and Acting President John Ryder. “It was obvious I was going to get the job. It was basically there for me to take. But the weird thing that should have tipped me off immediately is when Ryder said ‘the main thing you have going for you is that you’re American’. I could tell there was something going on”.

The administration was more interested in his nationality than his qualifications. “With 20/20 hindsight, I realised it was probably because they needed a certain number of Americans to make it look like this was a legitimate American university”.

Things got stranger when he arrived in Malta. Two other staff members, both Maltese, warned him about the precarious legitimacy of the AUM. When he asked Ryder what was going on, he was told to be wary of those two people because they were PN, not PL. “A lot of people thought they were spies in AUM”.

More alarm bells went off when he asked Ryder about “back-up mechanisms” in case the university were to shut down. “There was planning for the failure of the university, but [Ryder] said it was for accreditation purposes, that we needed to have something in place just in case”.

The lucrative salaries promised by AUM also proved too good to be true. “When salaries were initially agreed to, it was in euro. But Hani Salah decided, ‘Oh, no. That’s US [dollars], not euros.’ I lost a substantial portion of my salary. There was a lot of unfairness, a lot of injustice that was going on at AUM”.

Professors were also expected to sign contracts that contained irregular clauses. “They didn’t want press leaks, so in the contract, it said if we talked to anyone, and especially members of the press, AUM could sue us. If they found out I was doing anything to harm the reputation of the AUM, they could sue me in perpetuity”.

When information did get out about the strange events taking place at AUM, staff members were asked to find out who was responsible for the leaks and expose them. “They wanted to have their finger on the employees. They wanted surveillance in place to make sure the faculty were doing their jobs”.

When one faculty member caused problems with other staff, Ryder remarked that people could be fired for ‘lack of collegiality’. “It just came out of the blue. I kept thinking, if they’re going to fire [this person], who else are they going to fire?”

The entire AUM experience was characterised by strange incidents and bizarre behaviour, but the strangest by far took place when a huge rainstorm struck the island near the end of September or beginning of October 2017.

“It happened during the refurbishment of the buildings. The top glass part of the building wasn’t finished yet, and all this water started pouring down through the ceiling. It was falling on brand new computers that had just been installed, and on people’s papers, graded assignments and classrooms. The whole building got flooded”.

In a normal institution, a crisis like this would prompt immediate action, and it did, for some. “I was getting people evacuated, and pushing water around, and we had most of the staff too — except the Jordanians. The Jordanians were all missing”.

He went to the main building in search of Khaled El Zayat, Vice President of Global Initiatives. “I’ll never forget this image,” he said. “Khaled, Walid and all the Jordanians, the project manager for the construction, engineers, they were all in the main conference room sitting with their feet on the table smoking cigars”.

“These are engineers. They would know how to resolve this problem. They should have been going nuts trying to figure out how to save the building they designed. But they didn’t care at all.”

The conclusion was very clear to this American academic. “Maybe this is all just designed to fail? Nobody really cares”.

The subject of this interview was fired by Ryder six months after relocating to Malta to take up his post (just before the probation period expired), along with all 13 faculty members.

Not long before this, a number of key administrative staff, including the AUM’s Vice President of Operations and Construction Project Manager, as well as its directors of marketing, admissions and human resources, were summarily dismissed without apparent cause.

The land at Zonqor and the historic Dock 1 at Coscpicua still belong to Jordanian hotel developer Hani Hasan Naji Salah.

Mirror, mirror, on the wall