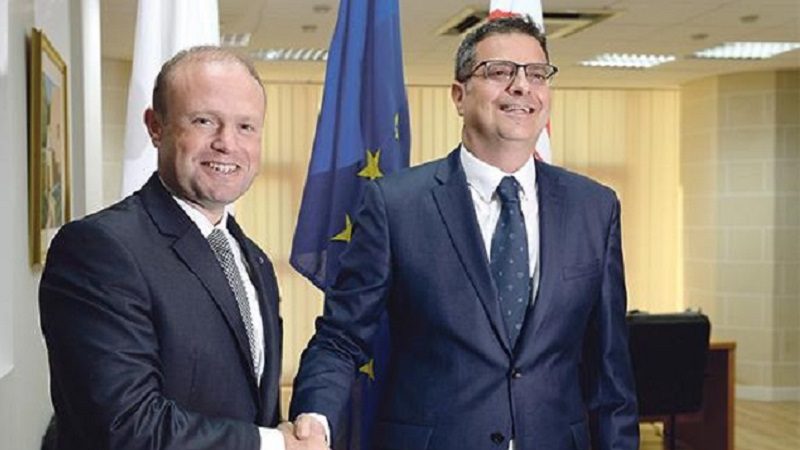 We are right. Joseph Muscat with Adrian Delia

The political centre is moving to the right

On Sunday, Adrian Delia regaled us one of his pearls of xenophobic wisdom when he asked whether our children are going to end up being thought by teachers from Pakistan and Bangladesh.

For the umpteenth time, Delia’s words were condemned but evidently the PN has a clear path in mind. The PN strategists have decided that the only way for the PN to win over new voters to make up for the haemorrhage within its traditional voter base is to pander to the far-right.

Delia’s comments are not isolated for PN candidates such as Frank Psaila and Dione Borg have also made inflammatory and divisive comments in regards to non-natives.

By disguising racist comments as arguments for more security for local communities the PN is only legitimising far-right fringe movements such as Moviment Patrijotti Maltin and Norman Lowell’s motley crew.

Just take a look at a recent statement by the so-called patriots who have launched the ‘Make Malta for the Maltese again” campaign ahead of next year’s European elections.

“The disparities in Malta at the moment are incredible: the government is in the hands of multi-millionaires, and the people at bottom are suffering. We don’t want Malta to be Dubai, we want Malta to be one of social change, where the poor and the working class are very strong.”

Such a statement would not be out of place in a leftist party manifesto or an anti-poverty campaign. But such a statement must be taken in the context of a movement which believes that being born in Malta gives you more rights than foreigners living in Malta.

And that is exactly why the PN should stop legitimising far-right movements by echoing narratives which place natives in a superior class to foreigners and blaming all social ills on non-Maltese nationals.

Because once the discourse of far-right movements become indistinguishable from that of mainstream parties, middle-of-the-road parties have to outflank them and move to the right.

Malta does not run the risk of having a far-right party elected to government as the system is designed to keep smaller parties out of parliament. However we do run the risk of the two mainstream parties moving to the right to address concerns about migration and the influx of foreign workers.

We already have a government which facilitated the death of asylum-seekers by playing pass the parcel with Italian authorities when they receive distress calls from sea.

We also have a government which keeps racists happy by bullying NGOs saving lives at sea and blocking rescue vessels from saving lives.

Citizens concerned about immigration and identity issues are not primarily driven by racism, ultranationalism, or Islamophobia, which explains why far-right parties across Europe have toned down their rhetoric in an attempt to appear more respectable.

But in Malta, the process is inverted. Given the two mainstream parties’ majoritarian nature, they tend to absorb voters from the left and the right. Therefore, in recent years both Labour and the PN made right-wing discourse their own.

Labour campaigned against EU membership by warning that Malta would be invaded by Sicilian barbers and Swedish women seeking love.

Joseph Muscat supported push-backs and still advocates the return of migrants to the failed state of Libya. And despite his sweet talk of cosmopolitanism there is still no sight of an effective integration policy for third-country nationals and citizenship laws remain among the most arbitrary and discriminatory in Europe.

On the other side of the political divide, the PN increasingly sounds like Matteo Salvini and Viktor Orban by warning that Malta is losing its identity and that poor and marginalised foreigners “are robbing the Maltese people of their liberty, making our elderly people feel scared in their own homes and our youths scared to walk the streets.”