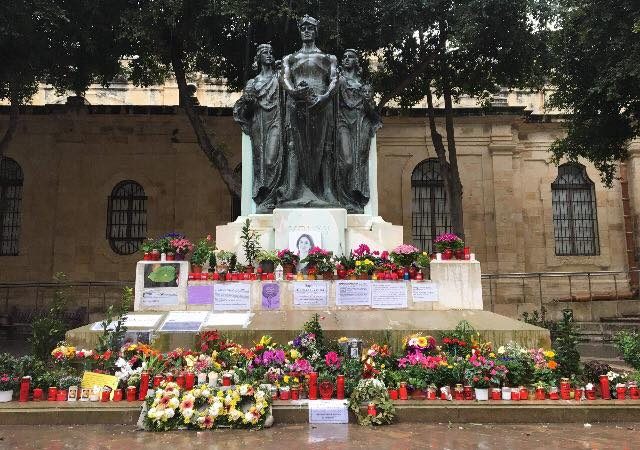 Two months ago, there was the risk of a stalemate in which meaningful dialogue would be choked out of the political agenda. Third parties were attractive, but I had argued that “new, perhaps non-partisan, chess pieces ought to be brought into play to draw the game out of this irksome, disheartening stalemate”.

Labour’s tactic was to compulsively downplay allegations, maintain their obstinate grins and emphasise their unyielding serenity. But as Daphne Caruana Galizia’s most vicious enemies, they apprehensively denigrated her name, creating the conditions for her elimination.

Because she was vilified, slandered and threatened, her murder seemed grimly inevitable; we were shocked, but disconcertingly unsurprised. It was foreseeable because of the way she was treated by those who still retain their honourable offices. Not even this could make them resign.

There are citizens who reject this degeneracy of the Maltese State. If Daphne died for exposing corruption, then she was decidedly not free to speak. The activists demanded to know who would impede their rights. Right on cue, Government Ministers began qualifying her murder, and a caution was administered: don’t bite the hand that feeds you.

By threatening not to guarantee fundamental human rights, a democratic state might just have been reduced to an autocracy, remaining afloat populistically.

For disobeying this chilling warning, Occupy Justice had to withstand being called whores; Il-Kenniesa were called traitors. These are the activists who sought to tear the veil of omertà around which our State was tightly wrapped. The Labour Party found they could not influence, buy, bully or silence these adversaries, and their persistence exposed them to the implacable animosity of the beneficiaries of corruption.

Even if this administration emasculated the country’s institutions to bolster its power and escape accountability, international organisations are exerting pressure, and their eyes are fixed on Malta. The ground beneath this Government’s feet is shrinking, if with restraint. But instead of succumbing to pressure, the Labour Government negates this movement. Thus, Malta’s divisions become starker. Its present leaders ought to be held accountable for this disunion.

The roots of corruption they have nurtured are decaying a nation, and now the soil is crumbling and exposing that rot. After years of sleaze, something is evidently starting to pinch this infallible cult; the “non-partisan chess pieces” played a good move.

To rebut, they are on the offensive. The Labour Party, for a fact, has its members share pre-written posts en masse on social media to manipulate public opinion and spread hate against the activists and politicians it dislikes. It cannot now claim to respect freedom of expression.

Denouncing activists and trying to separate Daphne from their cause amounts to manipulation of the true intention. Daphne’s memorial in Valletta is maintained by activists and held as a testament that there are people in power who killed a woman. Yes, people can die when the wrong things are said by the wrong people, and the messenger is responsible for his words. The incumbents would do well to take note of this.

With reference to Il-Kenniesa’s powerful action justifiably branding Castille a ‘house of impunity’, V18 chairman Jason Micallef helped disseminate the mantra that “enough is enough”, implying somebody has been cumulatively angered by someone else stepping over a boundary.

Camus’ rebel “affirms the existence of a borderline” at which the rebel refuses to budge.

Indeed, it is the activists’ situation that is desperate. What is the Labour Party protesting when incriminating evidence can be buried by its most powerful members? When protestors are denounced for exercising their basic rights and called traitors for neglecting to glorify a cultish leader?

Everything has remained unchanged in Castille: SLAPP lawsuits have its blessing by its acquiescence; no inquiries have been instigated into the Vitals scandal, or into AUM’s abysmal record; the University and the press are sought to be controlled further by the Executive; the Prime Minsiter’s closest buddies remain in power.

That is when we say “enough”.

In contempt of dissent, they want Daphne’s memorial scrapped and activists are being insulted and marginalised. Il-Kenniesa shone a light for 15 minutes onto an office that has apparently chosen to operate in the shadows, and there was outrage: “Enough is enough”.

The ball is in their court, and their response to protest is confirming their vast democratic deficit.

PM lied about Chief of Staff’s involvement in film industry

On striking and smiling