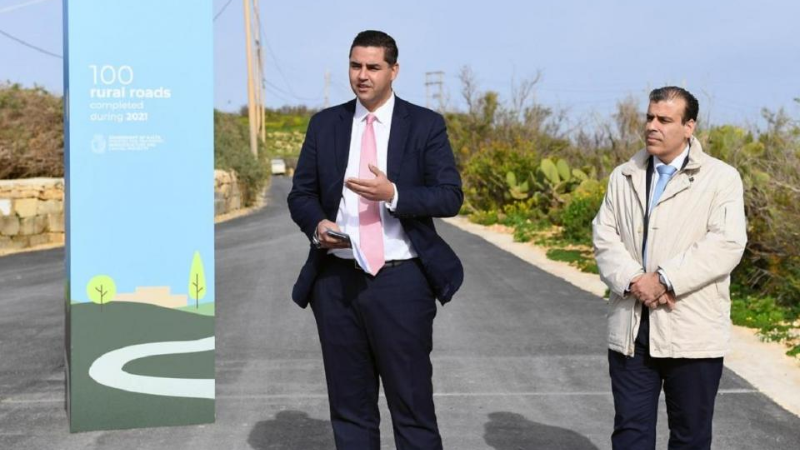 Minister Ian Borg and his chosen head at Infrastructure Malta, Frederick Azzopardi, now facing charges in court, succeeded in establishing a new record in their last months at the helm of the government’s roads agency, dishing out €21 million in more than 120 different direct orders during the last election semester… to well known friends of the Labour Party.

According to an analysis by The Shift of new data published in the Government Gazette, the most valuable direct orders went to the usual contractors well-connected to the Labour administration and, most importantly, to Minister Ian Borg. Borg has since been shifted by Prime Minister Robert Abela to the Foreign Affairs Ministry.

The Central Link project, inaugurated by the prime minister before the elections, continues to elicit substantial multi-million-euro payments to contractors working under the joint venture Link-2018 JV, with costs way past its original bid for the tender.

The consortium, led by Vince Borg, better known as ‘Ċensu n-Nizz‘, a former canvasser of PN MP Beppe Fenech Adami who turned Labour in 2013, was awarded another €4.7 million in direct orders, over and above the original tender price.

According to Infrastructure Malta, an underpass that seemed to be an afterthought should not have added costs to the €28 million original tender. Yt it has already cost taxpayers more than €5 million extra, with works still far from complete.

This is in addition to another €6 million already over budget for variations on the Central Link Project.

The latest direct orders, with the possibility of more to be issued in the coming weeks, have already pushed the original €28 million tender to some €39 million, a staggering €11 million over and above the original value of the works.

This means that V&C Contractors of Ċensu n-Nizz, Schembri Barbros and Schembri Infrastructures Ltd, known as tad-Dubbu, were paid €11 million over their original tender –  all through direct orders.

Yet it was a company connected to Gozitan construction magnate Joseph Portelli that seems to have done best, according to the direct orders list given during the first six months of the year by Infrastructure Malta.

Although no information has been given on the dates when various direct orders were given to the company, Excel Sis Enerji Uretim was given €5.7 million in direct orders, mostly related to an energy project at the Grand Harbour to connect visiting cruise liners to the electricity grid.

Portelli, together with his construction buddies Daniel Refalo and Mark Agius, better known in Gozo as Ta’ Dirjanu, own a third of the company, with the rest of the shares held by Turkish businessmen.

Bonnici Brothers, the prime minister’s former clients, whose managing director Gilbert Bonnici was a business partner with the prime minister and his wife on a property development project in Iklin, was again a main recipient of the government’s roads agency contracts, this time to the tune of €2.6 million.

Among the works commissioned was the rebuilding of rubble walls and levelling of roads in various rural areas. During the same period, Bonnici Brothers were also given a €1.5 million contract to refurbish the Mellieha Bay promenade.

Labour’s organising secretary, William Lewis, an architect by profession and a former employee at Transport Malta, received three different direct orders in six months worth more than €30,000 for design and other work, particularly on Mdina Road in Żebbuġ through his company Crowdnet.

A new entrant in Infrastructure Malta’s direct orders list is a property development company called Darna Properties, registered in 2019. Just a few months after starting its operations, three separate direct orders worth over €600,000 for works in Għargħur and Rabat.

The company is owned by Jonathan Vella from Żebbuġ and Jeffrey Vella from Luqa. The latter is the owner of various other companies, including Sanotech Ltd, with Victor Sciriha, the President of the Valletta Football Club, as one of its main shareholders.

In comments to The Shift, Sciriha said: “Two and a half years ago, I resigned as President of Valletta Football Club. Furthermore, Sanotech was never operational, in fact the company is about to be closed.”

Frederick Azzopardi resigned from Infrastructure Malta soon after Minister Ian Borg was shifted to the Foreign Affairs Ministry and is now working as the CEO of James Caterers.

The article has been updated to include the comment by Victor Sciriha.

Nothing other than stealing and looting from the Maltese treasury..

Thank you, The Shift, for calling out this flagrant corruption. The Opposition should be shouting it out from the rooftops…..but they aren’t. Bernard Grech – are you having a siesta?

Bernard Grech much of the same!

Young, ambitious, and brimming with ideas, CEO Christabelle Camilleri ‘was made for business’ In more ways than one, V&C Group started out as a very traditional Maltese company. Nowadays it’s anything but.

Comment
The boys are back in town
Malta’s part-time prime minister is on holiday again. Not