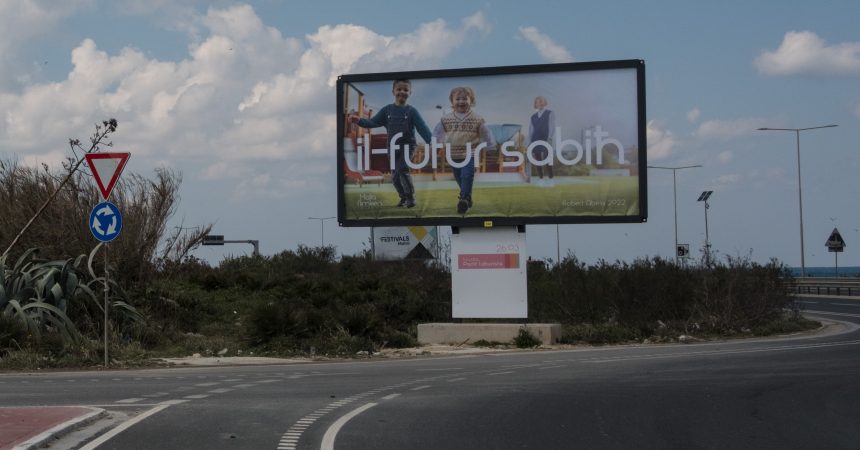 A Labour Party billboard on the Coast Road.

The Labour Party campaign dominates political advertising on both Malta’s roads and Google advertising, according to an analysis by The Shift that investigated the advertising by each party on four major arterial routes as well as their expenditure on online advertising.

There are at least 80 billboards and streamers from the PL and 30 from the PN that have visually taken over four major arterial routes in Malta. The four routes analysed by The Shift’s team all converge and close off in Pjazza l-5 Ta’ Ottubru in Msida, starting from different points in the North, Central and South regions of Malta. Four routes around the island covered by The Shift team.

Overall, all four routes saw more billboards and streamers from the PL than from the PN, with the incumbent party fielding more than twice as many ads as the opposition. Over a total length of 53.3km of roads, 110 political ads were visible.

The route which proved to be most packed with political advertising was a route starting from Tal-Barrani road, going through Marsa and finishing at Msida. In just 8.4km of roads in a historically PL district, The Shift logged 26 ads from the PL and just four ads from the PN. The route starting from Tal-Barrani road, through Marsa and to Msida, marked with billboards.

A 14.6km stretch of roads going through the central route of Attard, Mosta, Birkirkara and Msida carried the second-highest density of ads, with a total of 22 ads from the PL and four ads from the PN.

Another route covered in this analysis starts on the outskirts of Mdina, going through Żebbuġ, Qormi and Msida. In a route totalling 10km in length, 15 ads from the PL and eight from the PN were observed.

The only route in which parties had an almost even claim on advertising space, which has mushroomed across the island since the beginning of the electoral campaign, was a 20.3km route beginning in Mellieħa, going through St Paul’s Bay, Baħar iċ-Ċagħaq, Pembroke and Msida – traditionally, PN voting districts – showing that even in PN strongholds, the PL matched the Opposition’s expenditure.

However, the PL still edged out the PN in terms of billboards and streamers, the total number of ads amounts to 18 for the PL and 14 for the PN.

It is not only while driving or stuck in traffic that citizens are being targeted with a tedious onslaught of political advertising, but also in digital spaces.

In the first week after the election was called on 20 February, the Nationalist Party spent double the amount spent by the Labour Party on Google advertising. The PN spent €88,350 while the PL spent €40,350, according to figures taken from Google’s Transparency Report on 24 March.

As the campaigns went into their second week, both parties were spending similar amounts on Google ads. Labour spent some €68,450 while the Nationalist Party spent €60,200. In the third week, the PL’s expenditure shot up to €85,100, while the PN’s went down to €28,700.

Data from Google ads is, however, not comprehensive. Prior to 14 February, 2022, PL did not tag any of its adverts as relating to an election and accordingly PL advertising data only starts from that date.

An exercise carried out by The Shift analysing the report, which details and displays each and every advert purchased by the political party, found that Labour purchased over 450 different advertisements throughout the campaign, while the Nationalist Party purchased some 250. The format of advertisements for both parties include videos, banners of different sizes, and gifs.

The duration and expenditure of adverts differ. Adverts bought through Google will then feature on other websites that use Google ads for advertising and allow political adverts to run. Eight of the 450+ Google Ads paid for by the Labour Party. A table by Facebook shows how much the PL and the PN spent on advertising between 20 February and 21 March 2022.

The Journal, an online portal owned by the Labour Party that attempts to portray itself as a news channel in English and led by Randolph Debattista – the partner of disgraced Labour MEP Cyrus Engerer – spent over €13,000 promoting its ‘coverage’ of the general elections with headlines like, ‘PN’s star proposal, the making of a Ponzi scheme’ and ‘PN manifesto, a train wreck’ while lauding the Labour Party’s proposals.

These adverts, which were documented as being purchased by the Party from different pages they run on the platform,  would include sponsored ads that appear on users’ newsfeeds or within videos uploaded on the social media platform.

OPM rejects FOI requests, insists that it has ‘nothing’ on Joseph Muscat’s severance package