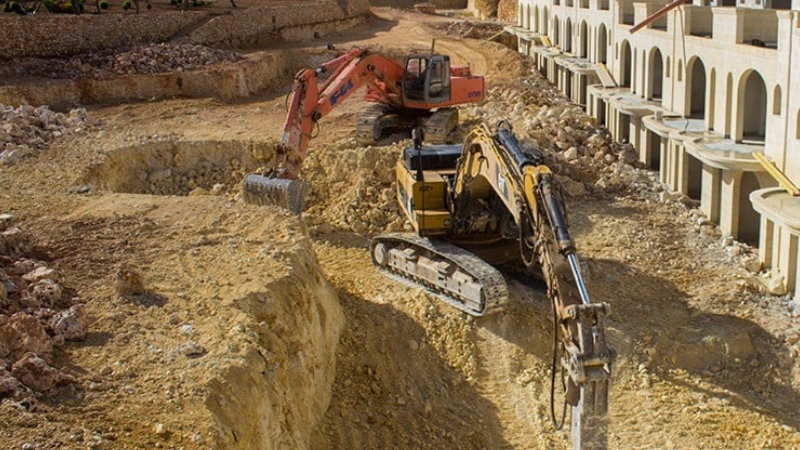 A photo published by Moviment Graffitti showing the illegal excavation works that were being carried out on Portelli's orders.

Developer's application for sanctioning of works filed on 1 November

In the latest twist in a long-running saga, Gozitan construction tycoon Joseph Portelli has applied to sanction illegal Outside Development Zone (ODZ) excavation works carried out in the Ta’ Għar Boffa area in Qala, a month after the works were halted by the Planning Authority (PA).

The planning application (PA/8143/21), which was filed on 1 November and uploaded to the PA’s site earlier today, seeks to sanction the illegal excavation of a 3,365sqm area of undeveloped land as well as the proposed construction of two pools and accompanying landscaping works. In total, it is the fifth application filed by Portelli’s Excel Investments Ltd in a series of applications envisaging a massive, 164-apartment block that was heavily objected to by the local council of Qala, NGO Moviment Graffitti, and residents living in the area.

Overall, the site on which the apartment block is being currently built is the size of around three full-sized football pitches. The staunch opposition to the project revolves around the monotonous character of the apartment block and its effect on Qala’s quaint, low-lying landscape.

The original applications that were filed by Chloe Portelli, Joseph Portelli’s daughter, and Daniel Refalo, his associate, had featured false declarations of sole ownership from both, an issue which was not taken into account as part of the planning process when it was first raised.

In reality, Excel Investments Ltd had, at the time, promise-of-sale agreements for the land, and was not the owner of the land on which it was applying for development. Although a police investigation into this was initiated, the police eventually stated that “no wrongdoing of a criminal matter was found,” according to news reports.

In spite of significant resistance to the project and the irregularities that were flagged since it was first proposed, Portelli’s piecemeal approach allowed for all four applications to be processed as if they were separate rather than all filed by people connected to Portelli. Had the project been processed in its entirety in a single application, its sheer scale would have rendered it subject to a period of extensive public consultation as well as an environmental impact assessment.

In its representation on the latest sanctioning attempt, Moviment Graffitti insisted it would be “immoral” to approve a sanctioning attempt which Portelli himself publicly admitted was illegal, stating that works had begun before a permit was issued because he was expecting permission to be granted.

Another NGO, Din l-Art Ħelwa, had also appealed against the approval of the applications connected with the Qala project.

In September, the Environment Planning and Review Tribunal (EPRT) refused the request to order the suspension of works until the appeal is concluded, essentially giving the developer a free pass to continue excavating, and thus rendering the appeal redundant. The appeal cost €4,000 to file, money which was collected through localised crowdfunding organised by Qala’s residents.

Portelli has gained island-wide notoriety for the way in which planning applications linked with his business interests have radically altered the urban and rural landscape in both Malta and Gozo.

First they knock on the door. Let in, then they ask for a glass of water, then they want to use the phone, then they ask to sleep on the sofa, then to move into the bedroom, then to take a bath. Before you know it, they’ve locked you out of your own home. Theft by stealth.