The assassination of investigative journalist Daphne Caruana Galizia on 16 October, 2017 was one of the most brutal killings in Malta’s history, a crime that sent shockwaves around the world.

Court evidence has confirmed she was killed because of what she was going to expose about government corruption and linked criminality, in a pattern of attacks on journalists that is escalating across the EU.

Three other investigative journalists have also been murdered in Europe in the past five years: the contract-killing of Ján Kuciak and his girlfriend, Martina Kušnírov in 2018 and the slaying of Greek reporter Giorgos Karaivaz and Dutch investigator Peter de Vries earlier this year.

While high-ranking EU officials and bodies have spoken up to condemn the increases in threats to journalists’ lives, a recent media freedom report suggests that member states have shown reluctance to address issues that have been flagged repeatedly over the years.

In the report by the Council of Europe’s safety of journalists platform, the authors called for an end to the prosecution of journalists for doing their work as well as the end of impunity for all conspirators involved in the killing of journalists, from trigger-men to masterminds.

To commemorate their bravery and determination to unearth the truth, we highlight below the main stories the four journalists were working on when they were killed. 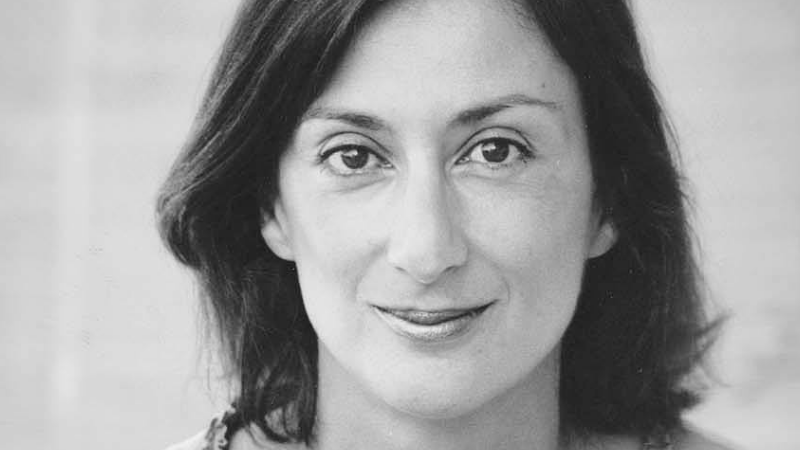 A public inquiry that sought to determine the extent of the state’s role in the assassination of Caruana Galizia is expected to publish its conclusions in the coming days.

Although only one of the alleged masterminds behind the murder has been charged, the public inquiry has revealed information that former disgraced prime minister Joseph Muscat’s government tried hard to bury by resisting the initiation of the public inquiry as well as by failing to ensure any prosecutions of top officials linked with the Panama papers scandal.

The hitmen who placed and detonated the bomb have been held under arrest since 2017, with one of them, Vince ‘il-Koħħu’ Muscat, turning state witness after obtaining a presidential pardon and a commuted 15-year sentence.

Another key witness proved to be the middleman who arranged the murder allegedly on behalf of Yorgen Fenech and, by extension, former OPM chief-of-staff Keith Schembri, both of whom deny links with the murder. The middleman, Melvin Theuma, provided the authorities with recordings of conversations with key suspects, including Fenech, who has been held under arrest since his attempt to flee the island in 2019.

Before she was killed, Caruana Galizia had been working on a story about the controversial Electrogas power station deal, after having received thousands of leaked documents from a whistleblower. This pact was shadowed by a network of offshore companies.  A Dubai company – 17 Black – that was found later to be owned by Fenech, one of the lead shareholders in Electrogas, was designed to funnel kickbacks into secret companies owned by Schembri and former energy minister Konrad Mizzi, who oversaw the signing of the deal.

Former economy minister Chris Cardona was also directly named by the hitmen as the mastermind behind another parallel plot to assassinate the journalist. De Vries was shot five times on 6 July as he was leaving a recording of the show RTL Boulevard in Amsterdam, in which he made regular guest appearances. He died on 15 July as a result of the wounds he sustained. He was 62 years old.

His immense body of work cemented his status as the Netherlands’ top investigative journalist. He is credited with having investigated over 500 murders, including being one of the main journalists involved in the investigation of the kidnapping of Freddy Heineken in 1983. He also had a TV show that centred around his work, a successful slot that ran for 17 years.

While two suspects are currently in custody for the shooting of de Vries, the Dutch government has vowed to dedicate significant state resources to bring his killers to justice. Given de Vries’ extensive level of involvement in several high-profile cases as well as his exposure of organised crime, it could be months before the first coherent details begin emerging.

The veteran Dutch journalist, considered even by the police force and wider Dutch government as a key source for cases linked with organised crime, will be remembered for his relentless pursuit of truth and his support for families surviving lost loved ones whose murders remain unsolved.

In spite of threats he had received in the years leading up to his murder, de Vries had refused police protection, arguing that police protection would not automatically guarantee his safety. Kuciak was 27 years old when he and his partner were killed in their home in a village east of Bratislava on 25 February 2018, an act that sparked protests attended by thousands of people and led to the resignation of the prime minister on whose watch Kuciak was murdered, Robert Fico.

Before he was killed, Kuciak had published his initial findings on property transfers and tax fraud involving notorious Slovakian business mogul Marián Kočner, who is seen as the prime suspect who commissioned the journalist’s murder via his links to organised crime.

Kočner, together with his associate Alana Zsuszova, was arraigned in court for his suspected involvement. The trial, which had originally declared that there was not enough evidence to support Kočner’s role in the double-murder, lead to significant revelations about the extent of corruption in Slovakia’s judiciary system.

As a result of political pressure from protest movements, international condemnation and investigative work conducted by OCCRP to further Kuciak’s findings, 18 high-ranking figures involved in the investigation were arrested for accepting bribes from Kočner throughout the proceedings.

When the prosecution submitted fresh evidence detailing the extent of Kočner’s involvement in organised crime, a retrial was called for on 15 June, leading to renewed hopes of achieving justice for Kuciak. Karaivaz was returning home from his workplace at Private Star TV when two assailants shot him 10 times in the street where he lived. Karaivaz was 52 years old when he was ambushed and gunned down in the Athenian suburb known as Alimos. In the years leading up to his death, he had directed his focus at organised crime and its links with the Greek police force.

Little is known about what led to the commissioning of his murder beyond the fact that it was a professionally coordinated hit likely linked to his line of work, a hit that necessitated extensive monitoring of Karaivaz’ habits before his execution. The exact motive has not yet been established by Greek authorities, who are being tight-lipped about the investigation so far.

Colleagues at Private Star TV confirmed that Karaivaz had not reported any threats against him nor had he sought police protection. Official government sources suspect Karaivaz was considered a target in an organised crime feud that has been going on for years.

Watching Report on RAI 3 reminded me of our heroine who was assassinated by mercenaries sponsored by the corrupt muvument and its trolls
.SHAME