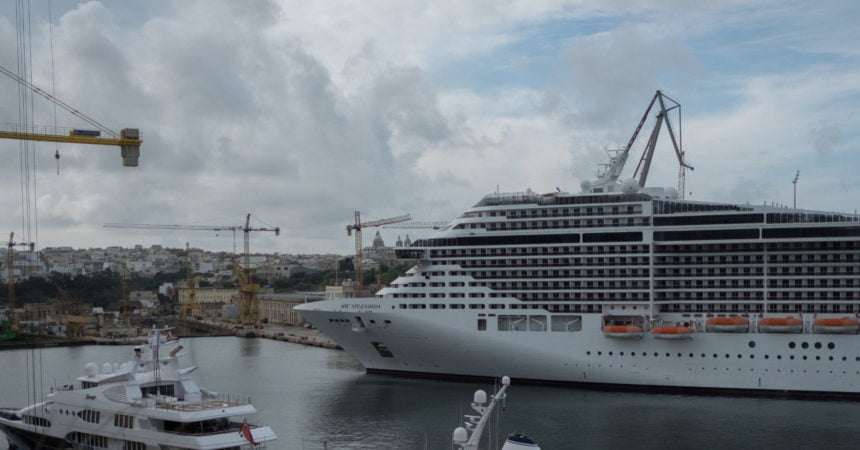 Since October, some of Cospicua and Senglea’s quaint, narrow, residential streets have had a jarring backdrop; a dominating, 333-metre long MSC cruise ship that has been berthed in Bormla wharf’s Palumbo shipyard for almost two months – and counting.

While, when filled with passengers on vacation, the MSC Splendida boasts of offering “comfort” and “luxury” to its guests, in December, many people who live in areas surrounding the berthed ship speak of a disturbing reality.

One Cospicua resident told The Shift that she has been keeping her windows and doors closed all day because of the “smell of fumes” and an “unbearably loud constant humming sound 24/7”.

She also spoke of having experienced shortness of breath since the boat arrived. “When it is humid or windy, fumes are especially bad,” she said, raising concerns about the long term health effects.

Another resident who lives close to Dock 1 also voiced concern about the “spewing fumes, especially at night”.

According to NGOs that have been following the situation, the vessel arrived in Palumbo’s dockyard on 24 October, causing disturbance to residents and producing a steady stream of emissions.

‘Coalition Action: Give Us Back Our Land’, a group of NGOs and citizens living in the area that had first united against the expansion of the American University of Malta, and now find themselves battling this issue, said in a statement that a cruise ship berthed at the port for eight hours produces 1.2 tonnes of nitrogen dioxide – the equivalent of 300,000 cars driving from Cirkewwa to Marsaxlokk.

BirdLife Malta, which has been studying air pollution from cruise ships in Malta for years, agreed with the comparison. The environmental organisation told The Shift that the consequences of such air pollution by cruise ships is “the equivalent of having a running power station within residential areas”.

With the cruise ship being described as an “eco-ship”, it is unclear exactly how much pollution the vessel is generating but complaints regarding the impact have not subsided. A spokesperson from the coalition told The Shift how the group has also received messages from residents reporting breathing difficulties which they believe are being caused by the fumes from the berthed cruise ship.

‘The beginning of a new reality’

Although the yard has been leased from the government in a 30-year concession by Palumbo Group since 2010, it was only last July that MSC Cruises took a 50% share of the shipyard management in a joint venture – a deal that was met with resistance by the residents and NGOs. As a result, the shipyard is now being used to service MSC cruise ships and other vessels.

In November, the coalition sought the intervention of the Ombudsman as frustrations at the MSC Splendida’s emissions increased. Activists complained about the lack of action taken by the authorities despite a number of meetings held with government officials.

The issues included a pending case with regards to toxic waste, and queries as to whether the conditions of the concession were being adhered to, the coalition’s spokesperson told The Shift. “We thought if there are issues now, they will only be aggregated (if more cruise ships will be coming in)”.

Curiously, a group of organisations in Senglea, made up of Senglea Regatta, Senglea Bocci, St Georges FC, Vittoriosa Stars FC, Senglea Athletics, Gunners, and band club Banda La Vincitrice, together forming the Senglea Cultural Association, disassociated itself from the coalition, saying it was not representative of the broader Cottonera community. Residents referred to possible sponsorships influencing the stand taken, although this was not independently verified.

The spokesperson for the coalition explained that although cruise ships had made use of the dockyard’s services before, they had never experienced a situation where a cruise ship was berthed “for such a long period”.

“This is the beginning of a new reality,” the spokesperson said in light of the recent deal where cruise ships are expected to be berthed multiple times. 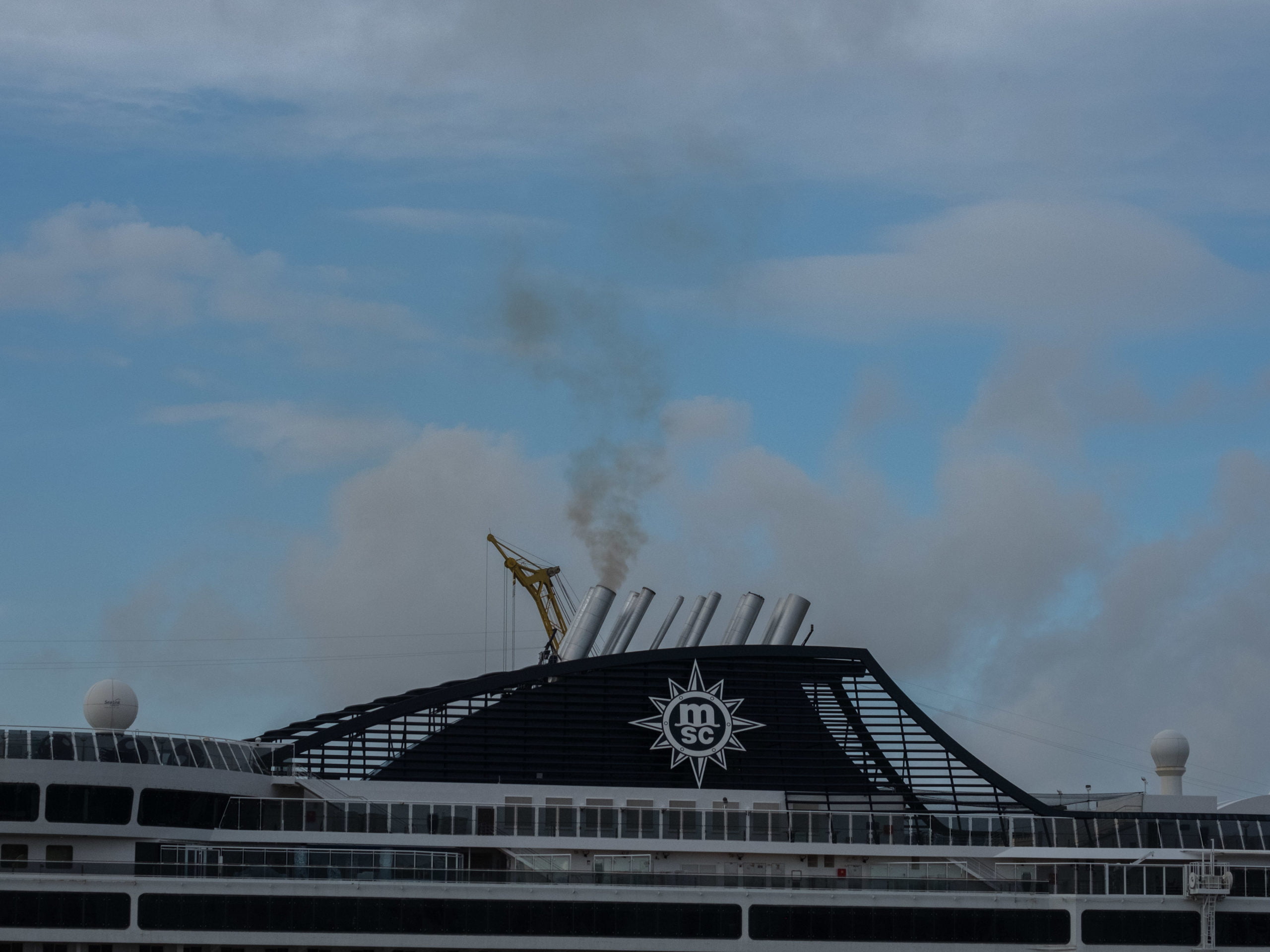 BirdLife pointed to a promising solution to improve the situation – a ship-to-shore power supply which was announced by Infrastructure Minister Ian Borg at the beginning of 2020 and launched later in November. Such a supply would allow berthed ships to plug into an onshore grid instead of relying on their running engines for power.

According to the ministry’s announcement, the ship-to-shore investments, costing some €50 million, will see the installation of two frequency converter stations and the laying of a 22-kilometre underground and subsea cable network to distribute electricity from Marsa to Pinto Wharf in Floriana, the Deep Water Quay in Marsa and Boiler Wharf in Senglea in its first stage. The second phase of the project will extend shore-side electricity to Laboratory Wharf and Fuel Wharf in Paola.

According to the government, the technology is set to cut over 90% of the air pollution that cruise liners and Ro-Ro ships produce when visiting Malta’s principal port while reducing noise and vibration pollution. The first phase is planned to be completed by 2023, two years before the deadline of an EU Directive on the matter.

Asked about the power supply being extended to Bormla wharf, a spokesperson for the Infrastructure Ministry said they are currently in discussion with Palumbo on “the way forward to utilising the ship-to-shore supply technology”, which they “endeavour to have ready by the end of 2023”.

A question about whether residents’ concerns about pollution from the MSC Splendida cruise liner are justified in light of the situation was ignored.

Besides such an initiative being introduced, there should also be continued investment on the monitoring and improvement of air pollution from ships, for example by “obliging ships to use cleaner fuel when transiting close to Malta or in the Mediterranean, known as the Emission Control Area,” BirdLife said.

Furthermore, authorities such as the Environment and Resources Authority (ERA) should continue to monitor air quality around the port to identify the impact of point sources.

Questions sent to Palumbo a week ago were not answered.

Things haven’t changed since July 2018, when a German measured the pollution in the Grand Harbour from the cruise liners https://timesofmalta.com/articles/view/cruise-liners-cause-shocking-air-pollution.683195 . People should be on the streets and make noise until action is taken to stop the pollution. This is incredible.

The associations disassociated themselves because they are being funded, giving them sponsorship by the same Palumbo that is why and this is of public dominion. When they say with money you pave a road on the sea. But the citizens who live here are being poisoned daily with its operations. Noise, paint, blasting, fumes and the rest. Than they send the handful of Maltese workers to speak to the media to retreat what is being published by the media regarding the pollution created as otherwise their job and future is threatened and these are only a handful of Maltese workers otherwise the rest are all foreign

Since last year, I have been living in torment. Thanks to the emissions. Adn it got worse since OCTOBER. IT HAS BEEN A NIGHTMARE. THE TOXIC FUMES ENTER MY HOUSE IN THE EVENING , SOMETIMES ON GOING TILL THE NEXT DAY. SCALP HEAD PAINS ARE BECOMING FREQUENT AND VERY PAINFUL. ONE CAN NOT BREATHE WITH WINDOWS ALL CLOSED AND OBVIOUSLY CAN’T SLEEP. GOING THROUGH THIS AS I WRITE, FOR THE THIRD DAY IN A ROW. THIS IS RUINING OUR LIVES AND SHORTENING IT, FOR SURE. NOBODY WANTS TO ANSWER AND TAKE RESPONSIBILITY. I HAVE CALLED SO MANY DEPARTMENTS, BUT NOTHING CHANGES. MONEY TAKES OVER PEOPLE’S LIVES.  THREE NIGHTS IN A ROW, I HAVE NOT HAD A FULL NIGHT’S SLEEP, SINCE. AND IT KEEPS GETTING WORSE.
WE THE PEOPLE, WHO LIVE HERE ARE FORGOTTEN, UNTIL OF COURSE ELECTION APPROACHES.

‘Art For Free Press’ exhibition success: Your last chance for one of the few remaining artworks