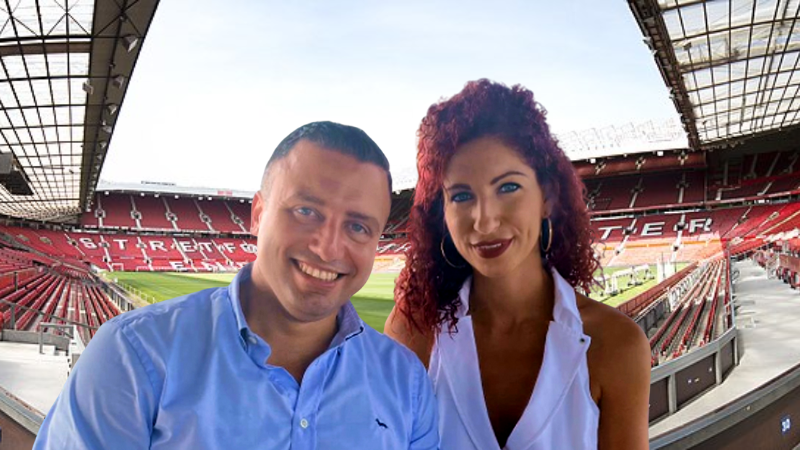 Thousands of euros in taxpayer funds were splashed out by the Malta Tourism Authority (MTA) last month for 11 of its officials, including Tourism Minister Clayton Bartolo and his girlfriend Amanda Muscat, to attend Manchester United’s first scheduled English Premier League match of the season at Old Trafford.

While they were there, the MTA renewed a multi-million-euro sponsorship deal with the top-flight English club – a deal whose value has never been disclosed by the government.

The Shift is informed that to renew the Manchester United three-year deal, the first of which had been signed by disgraced minister Konrad Mizzi, Minister Bartolo asked to be accompanied by an entourage of 10 other MTA and ministry officials – with all their flights, transport and accommodation expenses having been paid for by the state coffers.

According to the ministry in addition to the minister, himself an avid Manchester United fan, the ministerial delegation to Old Trafford included his Permanent Secretary Anthony Gatt, his head of secretariat, his media coordinator, an ICT executive, and MTA CEO Carlo Micallef.

The 11-strong Malta delegation – ironically the size of a football team – also included a senior MTA manager, two PBS journalists and two members of the Association of Sports Journalists.

An MTA official did not disclose the cost of the ministerial visit to Manchester to The Shift, but underlined that Amanda Muscat and other undisclosed people accompanying the minister to Old Trafford had not formed part of the official delegation and had “paid privately”.

Asked whether all the delegation’s members, including their guests, received free entry tickets to the stadium, which included hospitality, as part of the renewed MTA sponsorship deal, the MTA official did not reply.

According to him, the names of those benefitting from complimentary tickets as part of this deal cannot be divulged due to “data protection laws”.

The value of the first deal – covering the three-year period between 2019 and 2022 – as well as that of the second deal, remains a state secret.

The MTA has turned down the latest Freedom of Information by The Shift requesting a copy of the contract and a copy of the invoices paid by taxpayers for this deal.

While the MTA has denied that the government forked out €20 million for the first three years of this sponsorship, it said that it cannot divulge the details of the latest five-year renewal as it is “confidential”.

“In case that a copy of this agreement is sent to The Shift, the MTA would disclose trade secrets and other information having commercial value that would be or could be expected to be destroyed or diminished if the information were disclosed.”

The Shift has already filed an appeal over this decision, insisting that all payments made on behalf of taxpayers by public authorities should be transparent and held accountable.

So far, the MTA has not published any kind of study or impact assessment on the results obtained through the deal.

The MTA has also declined to justify how the particular club had been identified and whether any other sponsorship options were considered before renewing this deal for another five years.

Well maybe the 11 Maltese apostles that went to Manchester to renew the sponsorship deal with Man Utd. Could be chosen to bolster the team. We had Portelli scoring a penalty. Maybe these could find an opportunity as reserve ballboys!!!!

When people stop voting for those who enjoy spending the citizens tax money maybe things will change.

In the meantime the Air Malta is costing 50million from the tax payers money! and to make it worse our children now have new ex Air Malta colleagues who are sitting next to them not knowing how to use word document / excel sheet.

MTA actions should be clearly be benchmarked. So much money spent amongst friends for unknown results. This woman should be moved from this administration, unless she was there when the guy took over.

Celebrate the fact that this story isn’t going to age well. In a year or two’s time, when we are in a deep recession, a sensible Opposition (does one exist?) will use this and a legion of similar stories to rub Labour’s noses in their own self-generated sh*t. Tens of thousands of voters will turn on Labour. There will be no mercy for this sort of wastage, not when the National Debt was heading quickly towards €9,000,000,000.

This week our former finance minister and public money hoarder said that the government should target more financial aid to vulnerable people. Perhaps this is some new government scheme targeting the vulnerable?

Out of Curiosity
Reply to  Winston Smith

Indeed, the gov is targeting the vulnerable, perhaps those people who failed to contribute to the State appropriately and are now living on the lowest levels of a state pension. This is Labour’s philosophy, based on the notion of robbing Peter to pay Paul, where Peter should be the guarantee to Paul’s living.

SHAME should also be applied to us Maltese taxpayers for letting this bunch of thieves holidaying from our taxes. Metsola,David – supporting EU funds to this mafia government is nothing less than supporting corruption.

If you want to know how much, check the Financial Statement on Compnies House in the UK, it will be disclosed …

Maybe the incumbent minister is trying to make one brain out of the 11 as he knows he hasn’t much of one and neither has his persons of trust in his ministry?

Getting away with murder