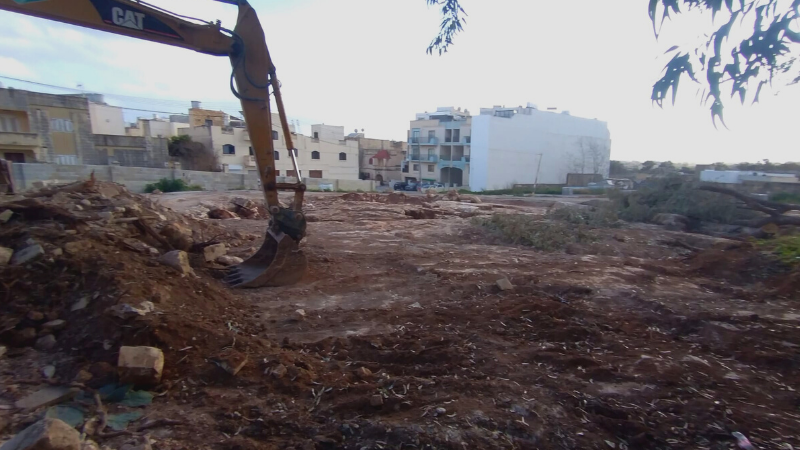 The Building and Construction Authority (BCA) issued orders to stop excavation works on a site in Birżebbugia just a few metres away from the archaeological heritage of Għar il-Friefet following the contractor’s failure to submit a commencement notice before starting works.

The development in question will consist of 178 apartment units, 22 penthouses, 104 garages, five retail outlets and one office spaced out over three blocks four storeys high.

Ample evidence of the works that were carried out could be seen in the form of heavy machinery and recently disturbed soil on site. Freshly dumped debris was also seen.

According to planning laws, works that may affect third parties adjacent to a site require a thorough assessment of any potential risks to nearby property, with the contractors being responsible for submitting a commencement notice at least five days before the works start. A map showing the site to be excavated.

While the planning application (PA/2901/16) was already approved in March 2019, the contractors initiated works before completed geological studies were submitted for scrutiny.

The application lists Ansgar Gescher as the applicant on behalf of Scirocco Heights Ltd, a real estate firm that lists Gescher as the sole shareholder on the Malta Business Registry. The contractors on site both fall under the umbrella of Zahra Group.

The site, which covers an area of 7,340sqm, is just metres away from Għar il-Friefet, a cave described by the case officer as “an underground cave of ecological, geological, archaeological and scientific importance”.

A YouTube channel listed under the name of Pierre Farrugia uploaded recent footage of an excursion into the cave, which is closed off to public access unless permission is obtained from the relevant authorities.

“Għar il-Friefet forms part of a greater area of the archaeological and geological area that includes Għar Dalam. This cave is a Level 1 Area of Scientific Importance and a Grade B Area of Archaeological Importance,” the case officer’s report reads.

The development itself now remains in limbo as the BCA is expected to assess the latest method statements submitted by the applicant, with its order to stop works until further notice, officially issued on 21 January, still in place at the time of writing.

ADPD chairman Carmel Cacopardo, who is the architect for Birżebbuġia’s local council, wrote a damage report on behalf of one of the residents whose property might be affected by development works in the area.

When asked whether residents ought to worry about the development, Cacopardo said, “the matter remains unclear” given that the latest method statements did not include the necessary geological studies to ensure third party property would not be affected.

“The reports need to determine whether there are fissures in the rocks, in which direction they may be, and whether there is any potential for rocks to slide over each other and if so, what measures need to be taken,” Cacopardo told The Shift.

The architect also spoke of how development on the site has been in the works since the 1970s, pointing out that he had personally participated in the PA’s board meeting on the original development in the name of the local council.

“We had participated in the process and we had insisted on ensuring protection for Għar il-Friefet, among other things,” Cacopardo told The Shift.

“Conditions were inserted into the permit, including where access is limited to trucks and vehicles to avoid damage as well as other conditions on controlling vibrations in the area to prevent any damage being caused to either people’s residences or Għar il-Friefet’s archaeological heritage,” he added.

Now a couple of years In Court dillydallying, and once Ghar il friefet collapses taking with it a couple of people with it, all will be fine and dandy, 100 hours of community service and voila! We will live happily ever after.
Ghar il Friefet is in danger of collapse as there are cracks and fissures in all direction, this can be established in a five minute visit if you dare enter into the unstable cave, the excavation will speed up the process.