An Indian millionaire based in Dubai has bought some 30,000 square metres of land – part of it in a protected Natura 2000 site – off the Gozitan idyllic Dwejra coast and has applied to redevelop a quarry dormant for decades, The Shift can reveal.

Investigations carried out by The Shift shows that Vijay Kumar Berlia, an Indian multi-millionaire who lives in Dubai and has massive business interests in various sectors including chemicals and real estate, has filed an application with the Planning Authority to rehabilitate and carry out ‘horizontal and vertical extensions’ in an abandoned quarry known as Tal-Qattara, in San Lawrenz. (The featured image shows the area the project is planning to excavate.)

The application, still at the screening process, has already been struck down by the Environment and Resources Authority (ERA) as being unacceptable. But the process continues.

Who is the Indian tycoon?

Berlia’s connections with Gozo, or how he even got to know about this spot from where he lives, are still unknown.

So far, it does not appear that Berlia has acquired Maltese citizenship through the cash for passport scheme and his sudden interest in ‘investing’ in Gozo is being questioned on the island.

His choice of architect may shed some light. Berlia’s development application is being fronted by Alexander Bigeni, the same architect who submits most of Gozo developer Joseph Portelli’s applications at the Planning Authority. 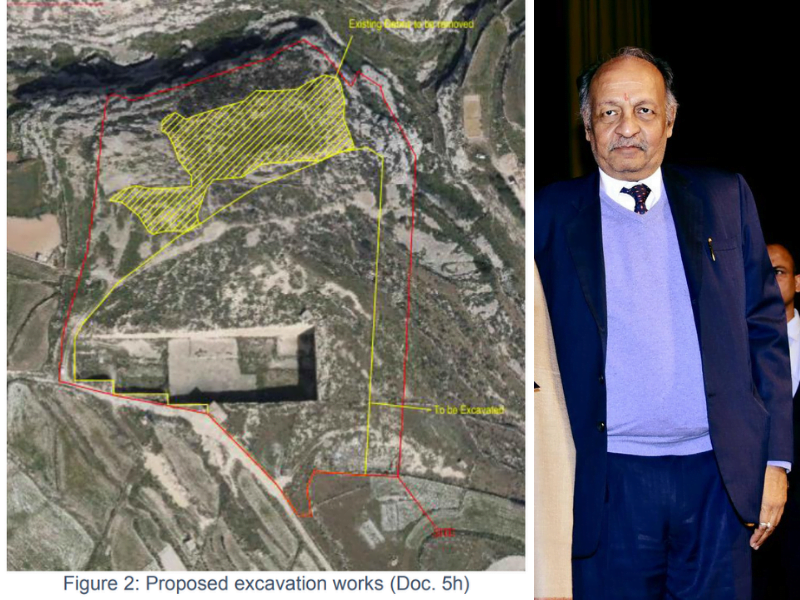 Bigeni is also a former consultant to Gozo Minister Clint Camilleri and is related to the same Minister through marriage. A former PN Minister with strong international connections is also being mentioned as having ties with the Indian tycoon – The Shift has as yet been unable to confirm this information.

Berlia is the owner of The Svrán Group, “an international conglomerate of businesses” headquartered in New Delhi, which describes itself as “a leading industrial and investment house with interests in automotives, chemicals and plastics, distribution, logistics and retail, pharmaceuticals and life sciences, real estate, international trading and has a nascent presence in information technology, merchant banking and financial services and publishing.”

Berlia has set up a company in Malta, BV Enterprises Ltd, in which he is the sole director, shareholder, legal and judicial representative and secretary.

Through his application, in which he declares full ownership of the 30,000 square metre site, Berlia wants to rehabilitate the area and extend a small disused quarry by about 12,000 square metres – the size of two football grounds.

The Shift is informed that the small existing quarry, some 4,000 square metres, has been left abandoned for decades, so much so that parts of it have been completely covered with vegetation.

Until being acquired by the Indian tycoon, the site was owned by two Gozitan brothers, Teddy and Nenu Grima, known as ‘Tal-Giegu’, who have been involved in the quarrying and real estate development industry for many years.

The same brothers own another quarry, known as Ta’ Xrejjah, also in San Lawrenz, which has now been fully developed and is being used for the dumping of construction material.

In 2008, Teddy Grima was fined almost €50,000 by the Court for illegal extension of the Ta’ Xrejjah quarry and for ignoring an enforcement order issued by the Planning Authority.

In a preliminary assessment on the development application of the Indian tycoon, ERA made it clear that this is completely objectionable as the site is protected for its ecological importance and high landscape value and might also compromise the whole stability of the Dwejra area.

“The additional opening of this site to new excavation works would have a significant cumulative impact both on the landscape and on the site ecology, since important segments of these major valleys would be engulfed by quarrying activity on all sides, transforming them into compromised natural enclaves dominated by the surrounding quarries.”

I’m sure this guy will vote Labour for the next general elections.

The rape of these two islands continues, most of the time with the connivance of those whose duty is to protect society.

We are witnessing the systematic state funded destruction of the environment. Similar to the blatant lie that the widening of Marsalforn road is meant to ease traffic congestion and avoid accidents (In reality its main purpose is to lay down the necessary infrastructure for the development of bungalows stretching from Marsalforn road up to Xaghra). This is another piece of our government’s hidden masterplan. I was immediately suspicious why the government chose to widen, repave and meticulously fix rubble walls on a tertiary road leading from Kempinski Hotel, San Lawrenz to Ghajn Abdul, close to this said site. A road previously used just by farmers and quarry trucks. My suspicions were correct, a Natura 2000 site which has already been a victim of massive abuses is earmarked for development. What is worrying is the government knew, paved the way with our taxes and given half the chance will approve this development and continue to line their pockets at our expense. The irony just last week, the government announced that the setting up of a financial crime agency has been scrapped. All this senseless development is not just happening because their is money to be made but because there is money to hide!

How does one say “THIS STINKS TO HIGH HEAVENS” in Indian?

Surely you must know that “Indian” isn’t a language. A number of languages are spoken in India, the most widely so being Hindi. There are several others, including Telugu, Bengali, etc. And English, of course.

Stick to the point. No one really cares about Indian linguistics. The rape of an island is the issue at hand.

Now we know why we need the Gozo car tunnel. Hello there Dubai, bye bye Gozo, its been nice knowing you.

A bunch of pimps…..simple really. If this goes through, let us wait for the propaganda of X jobs being created, X euros in foreign direct investment and the development of Gozo into the leader in quality raw material. Maaaaa we’re so doomed.

Is this a joke?

Is it possible that the Gozitans are being infected by the Maltese GREED and to hell with the environment?

Do not let this corrupt government ruin you island as he did in Malta as one day your children will curse you. This corrupt soul less government is only there to make some distrusted people millionaires and when they ruin our two Islands will find refuge in either a nice resort on the Austrian Tyroll or in the land of corrupt – Dubai where they have stashed their illicit money.

This corrupt government is in business with these billionaires! All in business together!

Wake up and smell the construction dust before all that’s left is the bitching.The laws need changing.

We have truly reached a new low!

You reached it years ago, now it’s all out there for others to see. The corruption didn’t happen overnight!

The rape of an individual lands someone in court and hopefully in jail. And that is as it should be. When a whole country is raped, the perpetrators are lauded to high heaven and protected by the authorities since they create ‘wealth’ !!

Is someone thinking that this billionaire came here to invest out of the blue? There are many including politicians hiding after his name! What a mafia state we are living in! Terror!

I have very little doubt, if any!

People of goodwill. Just to remind you all that to change a wooden window to an aluminium one you and I need a MEPA permit. But others can do what the fu_k they like.

This is so very sad to read.

L’aqwa-Zmien, even in India, omg.

Maybe planning can stop any development or does money buy anything in Gozo too ?.

Standards are worthless without accountability