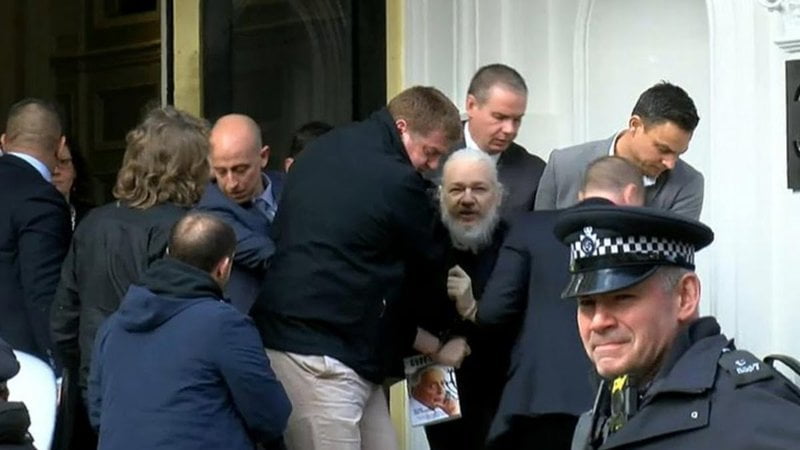 Wikileaks founder Julian Assange’s ailing health condition has led him to miss a hearing at a UK court this week, raising further concerns about the state of his health and strengthening calls for him to be released.

A group of 11 current and former statesmen from Europe and the US wrote an open letter to the Lord Chancellor and Secretary of State for Justice Robert Buckland and UK Commons Justice Committee Chari Bob Neill, asking for Assange to be released into home detention with a 24-hour monitoring ankle bracelet.

The politicians said they supported the urgent appeal by Australian MPs Andrew Wilkie and George Christensen who asked the British authorities to “urgently reconsider providing Assange with release from Belmarsh Prison to monitored home detention, as he fits all of the grounds noted for such early release by leading organisations as the World Health Organisation, the United Nations and the UK Prison Officers Association.

At the start of the outbreak of coronavirus, Assange, who is in Belmarsh prison pending his extradition trial to the US, had filed an emergency bail application on the basis of his deteriorating health condition. This was denied.

In their letter, the politicians pointed out that the WHO and the UN had been unanimous in calling for the release of all non-violent COVID-19 prisoners and the appeal asked for “compassionate consideration” to the fact that Assange was a non-violent prisoner who was in preventative custody with no history of harm to the community.

“He is not convicted and is thus entitled to the presumption of innocence,” they said.

His doctors had warned that he was at risk of dying if he contracted COVID-19 because of his pre-existing lung condition.

“We are advised that COVID-19 is rapidly spreading throughout UK prisons and that there are infections [and at least one death] at Belmarsh Prison,” the letter said.

Assange was in poor mental health due to spending so much time in solitary confinement. The prison’s COVID-19 lockdown measures were further undermining his mental health.

“With the director of the Centre for Disease Control and Prevention warning of a second wave of coronavirus during the influenza season, we stress that even those vulnerable prisoners, such as Julian Assange, who survive the current crisis remain at risk,” they said.

Reporters Without Borders UK Bureau Director Rebecca Vincent expressed her frustration at the way the Assange hearing took place on Monday as she tried to follow the proceedings remotely. She also said it was “extremely concerning” that he had not been well enough to attend past several hearings, even remotely, but these continue as if this had nothing to do with him.

This was not dissimilar to when he couldn’t follow properly from the glass dock in Woolwich Crown Court, she said. The international press freedom organisation has campaigned against his extradition to the US.

Some observations on conclusion of another frustrating administrative hearing in the case of Julian Assange (thread). And before I go further – @RSF_inter continues to call for his immediate release. #FreeAssange

Meanwhile, back in his home country, a group of serving and former MPs, a cross-section of the
Australian legal profession, diverse human rights advocates and a large number of writers, publishers and journalists appealed to Australian Foreign Affairs Minister Marise Payne to urgently intervene on Assange’s behalf.

“The Australian government should be willing to intervene to protect the lives of Australians caught up in legal processes in foreign countries, where those proceedings violate international law,” they said, urging the government to make a bail request on his behalf.

In a matter of only a few days, Assange will face court again in the UK.

His state of health had also alarmed UN rapporteur on Inhuman or Degrading Treatment or Punishment Nils Melzer who said the journalist had been deliberately exposed to inhuman and degrading treatment while imprisoned.

Assange is fighting extradition charges to the US where he will face 18 charges of attempted hacking and breaching the Espionage Act for releasing the documents.

He can face up to 175 years in prison and has been kept in detention in a high-security prison in the UK since September, serving a 50-week jail term.

The War Diaries published by Wikileaks, based on classified US documents about Guantánamo Bay and the actions of the US military in Iraq and Afghanistan, provided evidence that the US government misled the public and committed war crimes. The information was carried by major media outlets around the globe in public interest reporting.