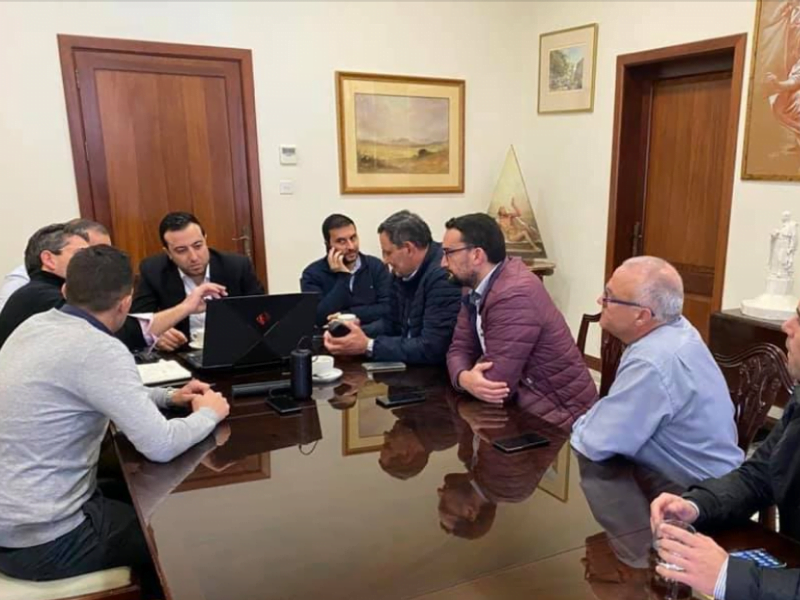 Architect Alex Bigeni (with phone) sitting next to Gozo Minister Clint Camilleri in a meeting.

Updated to include response by architect Alexander Bigeni

An embarrassing situation back in 2016 revealed the close relationship between newly appointed Gozo Minister Clint Camilleri and Gozitan architect Alexander Bigeni, who recently appeared sitting by the Minister’s side in a meeting with stakeholders in Gozo.

In a post on Facebook earlier this month, the Gozo Minister posted an image of a meeting with stakeholders while making a number of commitments to improve infrastructure on the island. Seated next to Camilleri was Bigeni, which brought to the fore an incident in 2016 that has as yet been unreported and which is telling of the close relationship between the two.

Three years ago, when Camilleri was still Mayor of Qala, he had passed on to third parties sensitive information about objections filed by councillors to a proposed development in Gozo. This was confirmed by the minutes of the local council meeting held on 21 October 2016, which show a councillor had confronted Camilleri on the matter.

The minutes also show that Camilleri had admitted that he met with the architect and possibly passed on the information. The architect in question was Bigeni. And the Council had ended up withdrawing its objection to the project.

Bigeni, who is also the architect for developer Joseph Portelli’s controversial Qala villa permit and the Ta’ Kassja project, had received information through Camilleri with the names of the Qala councillors who had objected to one of the development applications where his name was listed as an architect.

The application in question was a request to demolish an existing 44 square metre room situated Outside Development Zone to build a house. Din L-Art Ħelwa, Flimkien għal Ambjent Aħjar and the Qala Council had objected to the project.

During the meeting, the councillor and deputy mayor, both named Paul Buttigieg, had expressed concern about the information leak, as they had been approached by close relatives who disagreed with their registered objection to the project.

“It was possible that he (Clint Camilleri) told them something but he was unaware that there were relatives involved. He said that architect Bigeni, who is the project architect, had spoken to him and possibly said something… He apologised for what happened”, the council meeting minutes read. Council minutes refer to the interaction between Clint Camilleri and architect Bigeni when the current Gozo Minister was still Qala Mayor.

The deputy mayor had pointed out that it was not the first time that such a leak had happened, the minutes show. Yet, the Qala Council still decided to withdraw the objection it had filed against the development for which Bigeni was the architect. The objection was then withdrawn in November, according to Planning Authority records.

Camilleri was appointed Gozo Minister earlier this month, replacing Justyne Caruana who handed in her resignation after her husband, Deputy Police Commissioner Silvio Valletta, was exposed consorting with the man accused of being the mastermind behind Daphne Caruana Galizia’s murder, Yorgen Fenech.

Camilleri said in his social media post that he would prioritise the strengthening of road infrastructure in Gozo, posting a photo of a meeting held where Bigeni is seen holding a mobile phone to his ear. It is as yet not clear what role Bigeni had in the meeting. Questions sent to Camilleri remained unanswered. Architect Alexander Bigeni seated next to Gozo Minister Clint Camilleri during the meeting on 23 January, 2020.

During the early months of last year, Bigeni filed applications for at least three projects, including the controversial proposal to convert a Qala ruin on ODZ land into a villa with pool. Portelli, the developer, had then “renounced the permit” following public outcry.

Bigeni is also the architect behind at least three of the applications for another of Portelli’s projects at Ta’Kassja in Qala. Permits for the two sites – where work had already started – were both granted by the Planning Authority Board after having been recommended for refusal by case officers. The same had occurred with the permit for the Qala villa.

The third site is at the moment awaiting permit approval and the Qala Local Council has filed an objection against the project.

Reacting to the article on The Shift, Bigeni said the meeting which the article referred to was convened between the Gozo Ministry (as represented by the minister, a Gozo Ministry architect, a Gozo Ministry project manager and others) and the contractor tasked with embellishment works currently being carried out at St Francis Square, Victoria, Gozo.

“This meeting was convened to assess the situation on site and to give an update to the new minister,” Bigeni said, putting the minister’s social media post of prioritising infrastructure in Gozo in perspective.

“During that meeting, I was acting in my capacity as one of the key experts listed by the contractor for this project, as better indicated in the tendering process itself which closed in October 2018. I have been acting as such for the said contractor since the issuing of the tender,” Bigeni added.

The Gozo Minister, who had ignored questions on the subject sent to him before The Shift published the story, managed to find the time to send in a ‘right of reply according to law’ through the government’s Department of Information within two hours. It stressed the “devious agenda” of the article – twice – and yet provided no evidence to counter the local council meeting minutes on which the article is based.

Camilleri has therefore been informed that the tone and content of his response render it non-compliant with the law.

Complaint to Speaker after citizens stopped from accessing parliament