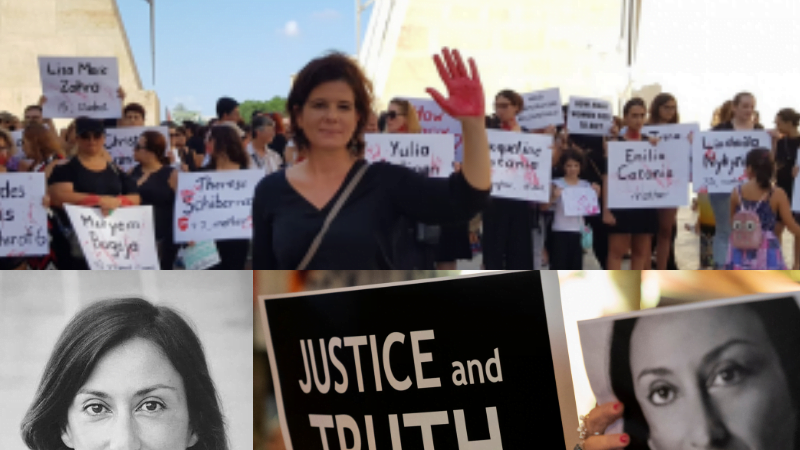 Lawyer Lara Dimitrijevic at the forefront of march against violence on women, has been silent on a female journalist killed in a brutal way.

Beyond the slogans, where’s the substance?

Patriarchy isn’t merely a misogynistic system that places men at the top of the food chain, but a world view built on ideas of masculinity that are increasingly considered toxic: the desire for power, the need to conquer, and a sense of entitlement and ownership.

But what are masculine traits? While comedian, actor and writer Robert Webb does describe the devastating effect toxic masculinity has primarily on boys growing up, he also points out that masculinity, in itself, really only means “being ‘not woman’”.

“Certainly, if you’ve seen somebody give birth, you very quickly lose the idea that grace under pressure or physical courage are exclusively male virtues,” he adds.

By extension, the negative characteristics attributed to men are also merely a social construct that could also just as easily be attributed to women.

So while this “what I say goes” mindset is often far more prevalent in male circles, one only needs to watch the footage of Labour stalwart Helen Cutajar filmed harassing activists at the protest memorial in Valletta to see that the traits associated with toxic masculinity are not the exclusive domain of men.

You can be a woman and be a patriarch, just like you can be female and be a misogynist.

In essence, you don’t have to have a dick to be a dick.

As it is, Malta’s unreservedly patriarchal society has given birth to a political discourse and style of government that is a manifestation of this power-hungry, uncompromising, entitled, aggressive and authoritarian attitude.

It is shameless and blatant – whether it’s Labour’s online hate groups, or Party in government’s dehumanisation of Daphne Caruana Galizia, or the State capture of the bulk of country’s institutions.

It is also insidious – MPs may profess to be attempting to tackle patriarchy while also supporting it by buttressing this style of governance and being selective in who they defend.

A debate on women reproductive rights, for example, is welcome as any debate on any issue should be – that’s progressive. But it loses its significance when it is patently timed to distract from broader pressing issues about the government’s worrying democratic deficits, and so it loses its credibility as a move in the public interest. We have seen this with the Labour Party’s use of pinkwashing.

Labour MPs suggesting that aggression towards women cannot be tolerated, should be applauded. But when it is a smokescreen to cover their own abuse of power it must be called out. How can Equality Minister Helena Dalli attend the United Nations Human Rights Review and completely ignore the fact that a female journalist was killed in the year under review? Did she really, honestly, think nobody would notice? They did.

And how can those who claim to be fighting for women’s self-determination ignore a woman so brutally killed in their midst for no other reason than the fact that she was a journalist?

While addressing gender pay gaps and workplace quotas is some step in the right direction to achieving an egalitarian society, it falls short of tackling the root causes.

Let’s face it: you cannot claim to be anti-patriarchy and progressive while supporting an undemocratic, authoritarian government.