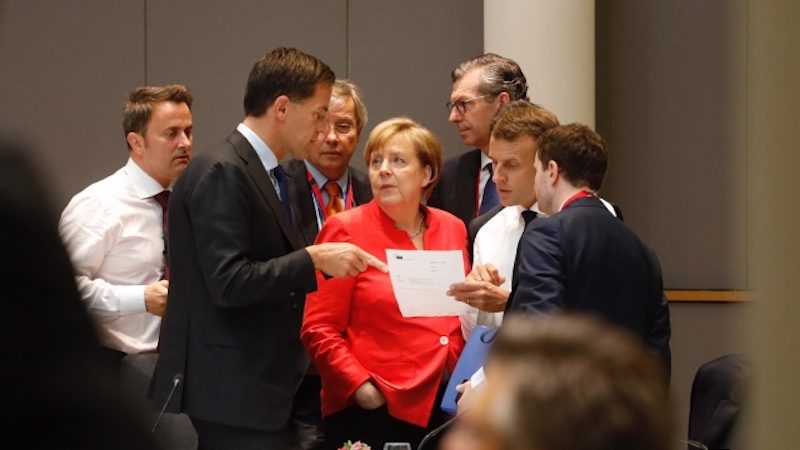 EU leaders came to a feeble agreement after a 10-hour meeting in Brussels (Photo: EU)

EU leaders agreed on opening “voluntary controlled centres” in various countries to process asylum applications but it is not yet clear which member states will volunteer to host such centres.

Before a deal was struck in the early hours of Friday morning at the EU summit dominated by migration, central and Eastern European countries resisted adopting a common position based on EU-wide responsibility and the deal is already being seen as a weak one.

Despite the agreement, details remained unclear and in an effort to avoid a chaotic situation, leaders agreed there should be “a shared effort”, but “only on a voluntary basis”.

A document presented by the new Italian Prime Minister Giuseppe Conte – who threatened to veto the entire agreement unless other EU states took in more asylum seekers – carried a number of proposals including the setting up of more reception centres in EU countries.

“We cannot bring everyone to Italy or Spain. Reception centres are needed in several European countries to safeguard the rights of those who arrive and avoid problems of public order and overcrowding,” the document seen by The Shift News says.

Moreover, Conte argued that more EU countries have to share the responsibilities of rescuing people at sea.

The document says that countries of first arrival, such as Italy, Greece and Malta, cannot be the only ones to screen newly-arrived migrants.

“It is necessary to distinguish between safe ports of landing and the competent State to examine asylum applications. The rescue obligation can not become an obligation to process applications on everyone’s behalf.”

Insisting that the Schengen Agreement is at risk, Conte told fellow EU leaders that “who lands in Italy, lands in Europe.”

He also told EU leaders that the Dublin Regulation is obsolete and warned that the EU risks losing the possibility of adopting a truly effective European instrument if nothing is done.

“The Common European Asylum System today is based on a paradox: rights are recognised only if people manage to reach Europe, no matter at what price,” he added.

During the marathon summit in which EU leaders faced to agree on refugee quotas, Conte also called for migrant processing centres in North African countries.

EU leaders agreed to “swiftly explore the concept of regional platforms in close cooperation” with non-EU countries and the UN refugee agency and the International Organisation for Migration, but previous attempts to establish such centres have failed to materialise.

So far no North African countries have agreed to host such centres in spite of the offer of EU funds, while others have ruled themselves out completely.

The controversial proposal is opposed by the International Organisation of Migration with Europe director Eugenio Ambrosi saying, “what we do not want is external processing centres and we definitely do not want an Australian model.”